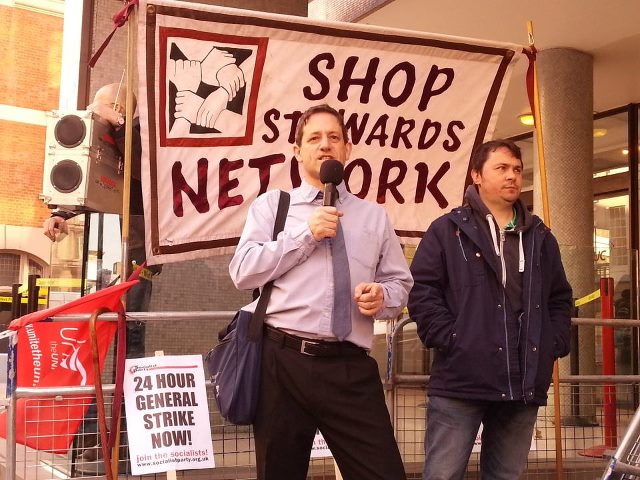 TUC: Set the date for a 24-hour general strike!

Up to 200 trade unionists, workers and campaigners lobbied the TUC general council from 8am this morning, 24th April. No one in the vicinity of the Great Russell Street TUC headquarters in London would have been left with any doubt about what was demanded: "Name the date - for a general strike!"

Rob Williams, chair of the National Shop Stewards Network (NSSN) that had called the lobby, compered a rally, inviting speakers to address the crowd. He explained that the NSSN has been campaigning tirelessly for the TUC to name the date for a 24-hour general strike. He reminded us of the 1,000-strong lobby of the TUC congress in Brighton last September. That day the TUC voted for the POA prison officers' union motion to consider a general strike.Today, with even more reasons to organise coordinated action, from pay freezes to the bedroom tax, the general council was debating it.

Martin Powell-Davies, from the national executive of the NUT teachers' union, was the first speaker in the rally, before dashing off to teach physics.
He, like all the speakers, provided ample reasons for a general strike - namely the Tories' vicious onslaught on education.
Gove's latest plan, to hack school holidays, is preparing students for a work-til-you-drop life, one that teachers already suffer.
Martin pointed out that the NUT has a plan for rolling regional strike action culminating with a national one-day strike in coordination with the NASUWT teachers' union. He asked the TUC to consider calling a 24-hour general strike for that same day.
Linda Taaffe, NSSN national secretary, developed this point later saying that the PCS civil servants' union had indicated it would join others in national action and that this proposal should be seriously considered.
She called on the TUC council to be brave, neither foolhardy nor overcautious, but to build on the willingness of those three major public sector unions to coordinate national action, by setting a date for all unions to build around, which if set now, will allow time for the serious preparations that are required.

Two union general secretaries addressed the lobby on their way into the council meeting. From the POA, Steve Gillan, mover of the general strike motion at the TUC Congress, explained that the POA hadn't intended to cause division and recognised the threat posed by the anti-union laws.
However, Steve pointed out that his union is denied the right to strike but when they had defied the law, their last two walkouts had not led to the POA being served with injunctions, showing that the TUC needs to get over the fear factor and do what needs to be done - name the day.
John Hancock from the POA's executive also spoke and thanked the NSSN for never wavering in its campaign for general strike action. Bob Crow speaking at the NSSN's lobby of the TUC, 24.4.13, photo by N Cafferky
Rail, Maritime and Transport union (RMT) general secretary Bob Crow was met with a big cheer, particularly from the large number of RMT members attending the lobby.
He said it was a crucial day for the TUC - for those in work facing attacks on pay and conditions but also for those not in work, facing the implications of the Con-Dems' ideological attack on welfare such as the bedroom tax.
He recalled the many times that solicitors had attended TUC meetings to explain why strike action was not possible.
Today the RMT and the POA were among those who had fought for legal experts Keith Ewing and John Hendy to speak to the general council to explain how a general strike would be legal.
Bob and others spoke of the threat of decline faced by the trade union movement if generalised action against austerity is not called and unions are not seen as fighting bodies.
But if a 24-hour general strike is called as a starter, people would join. He said his position is for the TUC to "name the day, and then another and another and another" to end austerity.
From the RMT's executive were Steve Hedley, Daren Ireland and Sean Hoyle. They firmly supported the call for action.
Daren said there was: "No alternative but to take this rotten government on". But he and others explained that Labour is also pro-austerity and pro-capitalist.
He called for support for the 121 Trade Unionist and Socialist Coalition (TUSC) candidates standing in May's county council elections. "We've got to start taking these steps, supporting candidates who will stand up for their communities". Adding to this message, Rob Williams read from an FT article on someone's Kindle that Labour leader Ed Miliband has "denounced as 'a terrible idea' the threat of a general strike".

Unison member Paul Couchman made a very important point for the TUC general council to hear. It is not just trade union activists and revolutionaries who are in favour of a general strike.
His Unison branch has 5,000 members and the vote for one was unanimous at the recent AGM. In fact the south east region of Unison supports the call for general strike action and so does Unison and the TUC in Scotland.
Responding to the warning that no action will lead to a decline of the trade union movement he reported that Unison is currently spending millions of pounds on a recruitment campaign but the results so far have not surpassed the numbers who joined when the union organised to strike alongside millions of other public sector workers in November 2011.
April Ashley, a black members' rep on the Unison national executive, spoke in a personal capacity. Unison research shows that black workers are the worst affected by austerity.
But instead of drawing the conclusion that the union should lead those workers to fight back, Unison looks for excuses, saying that it can't fight attacks on pay because people are too worried about their jobs.
April explained that people say they want action. Southwark Unison supports the TUC naming the date for a general strike because they know: "We're the ones who can stop austerity."

A whole range of speakers made the case for the TUC to act. Les Woodward, national convenor of the Remploy trade union consortium, said that it was too late to fight for the Remploy workers but he supported the campaign wholeheartedly as he feared if the working class doesn't resist then his grandchildren could face the conditions suffered by his grandfather.
Raj Gill, an NHS campaigner from west London, pointed to the utter decimation of the health service. Nancy Taaffe, a library worker sacked through cuts, pointed to the latest figures in today's Guardian: by 2018 an estimated 1.5 million women will be unemployed, while the queues at food banks grow.
She argued forcefully that the time is not just ripe for a general strike but rotten ripe.
Speakers also made it absolutely clear that if the TUC sets the date, trade unionists would respond and so would millions of others suffering austerity. Sacked agency workers who worked for Transport for London, at the lobby of the TUC, photo by N Cafferky
Everett and Sanjay spoke on behalf of 33 agency workers unfairly sacked by Transport for London after working for five years.They made an appeal for support and pledged their support to other workers in struggle. "We need to be more than 33".
Many union leaders argue that there are too many obstacles to organising coordinated general strike action but Suzanne Muna, from the Unite housing workers branch, smashed that excuse. She described how housing workers, often in tiny and scattered workplaces, were so determined that they were balloting for action despite all the difficulties.

Claire Laker-Mansfield spoke on behalf of Youth Fight for Jobs. Young workers are at the sharp end of the government's attacks and need a lead from the unions.
There are almost a million unemployed young people and millions more on the fringes of unemployment, in 'precarious' work with bosses feeling no obligation to recognise any rights.
Claire argued that the TUC has a responsibility to its members but also to the next generation. If the general council names the date, the youth would come behind the action.
A number of campaigners and trade unionists had travelled to the lobby from outside London. Steve Glennon committed Stevenage trades council to build for action.
Steve Score spoke on the campaign against the bedroom tax in Leicester, which was revealing a determination to struggle against the cold cruelty of the Con-Dems among the most vulnerable.
In winding up the rally and the lobby Rob pointed out that the CWU post and telecoms union had passed a motion in support of a general strike earlier this week. Clearly this action would be popular, but more than that, it is urgently needed.
Posted by Martin at 20:53