A fortnight ago, I posted an update about why the continuing denial of Covid transmission in schools must be challenged – and not just in words but through action by school trade unions. As infection rates – and consequently deaths - continue to rise, the need to take action has become ever more urgent. 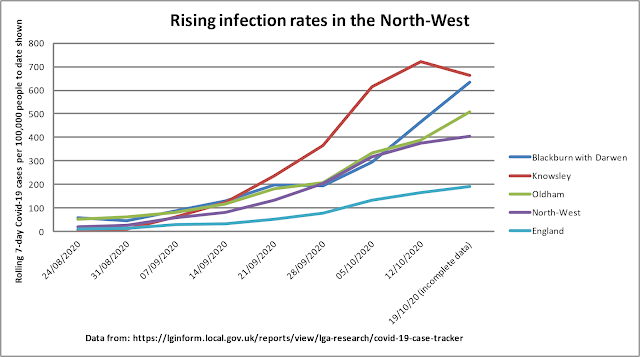 A tweet from Oldham Council this week has brought the illogical denial of Covid transmission in schools to its logical conclusion. The Council, understandably, wants to warn parents about the risks of transmission between children in households, especially in an area with such high community infection rates. But, in doing so, it falsely claims that schools are somehow “COVID-secure” as if, by magic, the virus refuses to enter the school gates!

Yet this nonsensical tweet simply sums up the dangerous nonsense that continues to come from the Department for Education – that it’s “safe” to continue to pack over 30 children and adults into poorly ventilated classrooms. It flies in the face of the growing evidence that airborne transmission will inevitably be taking place in those conditions, of the health risks that this creates for school staff, and how that leads to further transmission back into the school’s wider local community.

Outbreaks increasing across all school sectors

Firstly, as the latest slides from independent SAGE helpfully summarized, while the Government is pretending that schools are continuing to operate normally, the reality is that over 400,000 pupils (around 4%) of state school pupils have been having to self-isolate owing to positive cases and outbreaks in their schools. In some areas, as many as a third of secondary school students are at home. 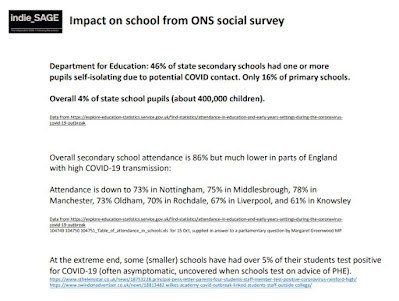 But this isn’t just a secondary school issue either. The latest PHE Report shows that there have been well over 1000 confirmed Covid-19 clusters or outbreaks in schools since the start of term, across all sectors. Indeed, in the latest week reported upon, it has been the primary sector that has had the highest number of reported incidents. 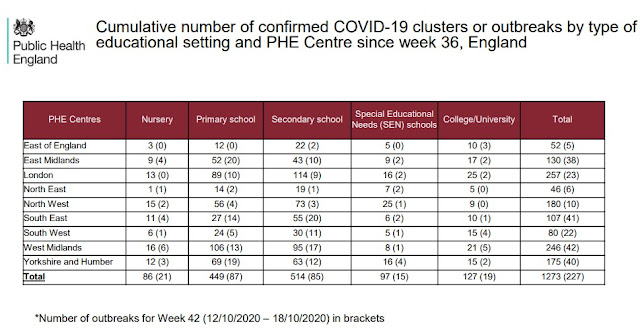 It’s important to stress those primary school cases because, up to now, the emphasis has been largely placed on the risks of viral transmission from teenagers and young adults, rather than from younger children. However, the latest modelling from the ONS shows that the estimated positivity of primary age children has now risen to levels similar to those estimated for secondary school aged children.

Of course, school staff themselves are also being affected. BBC News have just reported on analysis from the North West Association of the Directors of Children's Services, showing that in mid-October Bury, Knowsley, Liverpool and Manchester all had more than 40% of schools with confirmed cases. Those figures included 710 teachers with a positive test – from about 2000 in total across England.

Sadly, it’s those adult staff who are most likely to be vulnerable to serious ill-health from the virus and those infection rates will inevitably start to translate into school staff deaths as well.

In the areas with the highest infection rates, staff and student absence is already causing a chaotic situation. Schools are left without key staff at short notice, staff being expected to provide learning both for those in class and those at home – but without knowing who will be where from week to week. An agreed planned rota system is urgently needed to cut across this chaos and pressure.

For too long, an assumption has been made that children, particularly primary aged children, do not have a significant role in spreading the virus. But the claim increasingly fails to stand up to scientific analysis.

Of course, many children are asymptomatic, but that does not mean that they don’t transmit the virus. However, the fact that they often don’t exhibit symptoms has also meant that children have often been excluded from testing systems that are being rationed to those that do. That has helped hide transmission via children in our inadequate tracking and tracing systems.

As the Canadian Medical Association Journal warns, “Children have been ‘dramatically underrepresented’ in COVID-19 case counts because they are less likely than adults to show symptoms and therefore may escape detection … Especially early in the pandemic, ‘there were a lot of biased studies, and people were really uncritical of that.’

As the article mentions, there might be a biological reason why younger children are less affected in that “the virus uses angiotensin-converting enzyme 2 (ACE2) receptors in the nasal mucosa as a doorway into the cells, and studies have found that young children have a lower density of those receptors”. However, it also points out that “nobody knows if their poor adherence to physical distancing and other precautions cancel out any biological advantage”

A recent paper by Dr Zoe Hyde in the Medical Journal of Australia gives an overview of evidence that she concludes shows that “children may be more susceptible than originally thought and play a role in community transmission”.

While the paper points out that “Children appear more likely to be asymptomatic and given that the duration of viral shedding may be shorter in asymptomatic cases, it is possible that children may be infectious for a shorter period. However, the viral load of asymptomatic and symptomatic cases does not appear to differ, and infectious virus is readily cultured from both. Importantly, the likelihood of successfully culturing virus is unrelated to age. Children therefore have the potential to play a role in community transmission, particularly given the large number of contacts children have in close contact settings such as childcare centres and schools”.

Dr Hyde points to a number of outbreaks internationally where the evidence indicates that transmission among children was a significant factor. However, a more recently documented Israeli investigation into the role of schools in spreading infection provides some of the strongest evidence of all. Israel, like the UK, has seen a sharp rise in infections since schools reopened in September.

The sample size used in the Ministry of Health investigation makes it a far more reliable source than some of the early international investigations into school-based transmission. Of the 678,000 children under the age of 17 tested for COVID-19 tests between January and September 24, over half showed no symptoms. However, 8% of the children returned a positive test. This was the highest rate for any age-group, suggesting the rising positivity in the ONS data here in England is only to be expected: 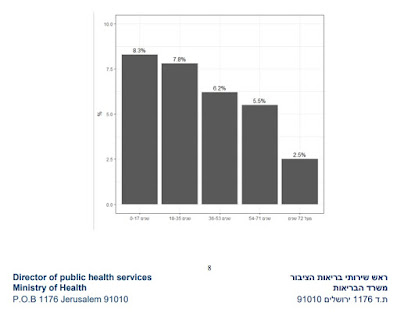 The investigation was also able to track the course of specific outbreaks and show how schoolchildren were part of the transmission pathways. 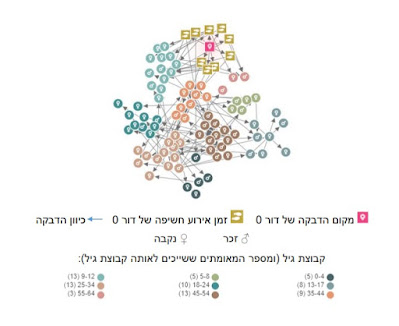 Significantly, the study also supported the prognosis that there may be a number of people, including children, who appear to act as ‘super-spreaders’. Across Israel, 350 people were identified who had been the source of infection of at least 10 other people. Of these, 17 (5%) were children. Seven children each infected 10 people, three children each infected 12 people, and one child infected 24 people.

Northern Ireland and Wales (even if in a very limited way) have, at least, implemented some element of a “circuit breaker” that applies to schools this half-term. However, across the UK, schools will be returning to full classes and, as the facts above have shown, further school outbreaks.

Instead of chaotic absences and rising dangers to public health as a whole, schools should be returning to the reduced class sizes we had before the summer, at the very least in the Tier 2 and Tier 3 areas where infection rates, and so the risk of transmission, are the highest.

With planning and consultation, staff and school communities could arrive at an agreed rota system that takes into account the additional workload pressures of supporting children at home and at school, making sure priority medical and social needs are catered for, as well as the protection of those staff and parents at greatest risk from the virus.

For example, a system where class sizes are halved, with most children in school one week then at home the next, could significantly reduce transmission risks by reducing the number of contacts and allowing physical distancing to be put in place which simply cannot happen in a class of thirty. This is of even greater importance in the winter months where providing adequate ventilation is going to be even more of an issue. At the same time, it would still make sure children weren’t permanently without the social interaction and support that a school environment can provide.

As demanded in the motion below, any parent who has to take time off work owing to childcare pressures arising from school closure should also be granted full-pay while they do so. Government should also fund the provision of additional staffing, drawing on the significant pool of supply staff looking for employment, and additional teaching spaces to minimize the time and numbers of children who may need to learn at home.

The weight of evidence is now so strong that a Government genuinely interested in protecting public health could not ignore it. But this Government will not act unless forced to do so. Contrast the way it brushed aside Andy Burnham’s appeals for more funding for Manchester compared to the way it had to shift over GCSE exam grading when young people started to organise opposition.

It is clear that the Government continues to ignore reality. Lancashire councillors reported that when they spoke up in negotiations about transmission in schools and workplaces being the real problem, they were told by Government officials that these were “off-limits”. So Lancashire is now in Tier 3, without adequate financial support for workers affected, but also with school safety continuing to be ignored.

For the sake of staff and for the safety of our communities too, unions should call members together and put the case for urgent strike ballots to be started without any further delay, starting with members in the worst-hit Tier 2 and Tier 3 areas.

The National Education Union has already said that it will support individual school groups that request such a ballot. However, staff will feel more confident to take action if they are acting alongside other school groups in a collective battle to call on Local Authorities and the Government to meet our demands. Even the announcement that the NEU were starting those ballots alone would be a lever on Ministers to change course and act on school safety.

Keeping our Schools and Communities Safe

The following motion was agreed by the Lancashire NEU Branch Committee and will be discussed further in the Branch once schools return from the half-term break:

Our members have worked tirelessly throughout this pandemic and will continue to do so to support pupils. However, with local infection rates continuing to rise, and clear evidence of the part played by schools and colleges in that increase, they cannot continue to operate safely with full classes. Action must now be taken to make sure all education workplaces are only open in conditions that are safe for students, staff and our local communities.

Local escalation to Tier 3, without addressing the issue of school and community safety, must be met with an escalation in the union’s response. Therefore, we agree to:

Call an urgent emergency meeting of all NEU members and seeks the following measures:

1) Call on schools and employers to put the following into immediate effect:

· all staff in higher risk groups to work from home;

· to reduce class sizes by moving to an agreed rota system; and

· for all staff to be regularly tested;

2) Call on Government to provide funding for additional resources, spaces and staffing, as well as full pay for parents who must remain at home to provide childcare;

If these measures are not secured, we will ask NEU Action Officers to conduct industrial action ballots as required.