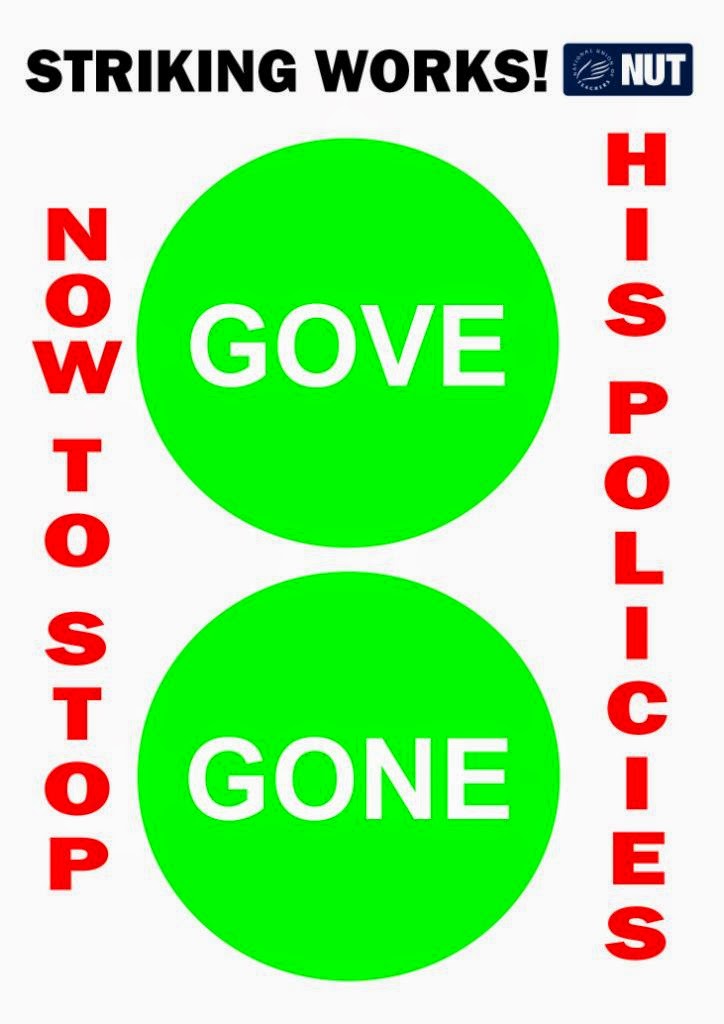 As I was sitting in a primary school staff room this morning, the news came through that Michael Gove had been axed - and demoted to boot. "Gove's a Gonner - Yay!" was immediately written on the top of the staff noticeboard!

At the NUT meeting at lunchtime, nobody was naive enough to think that, under Nicky Morgan,  the stress, workload and attacks are going to go away. However, everyone was elated that Gove had gone - and everyone could see that striking and campaigning delivers results!

Today's reshuffle is further evidence that politicians are most susceptible to pressure in the run-up to a General Election. So let's have a good summer break and then come back ready to strike again.

We've got rid of Gove, now let's defeat Gove's policies too!
Posted by Martin at 14:26 No comments:

Thank you for standing up together for education and public services 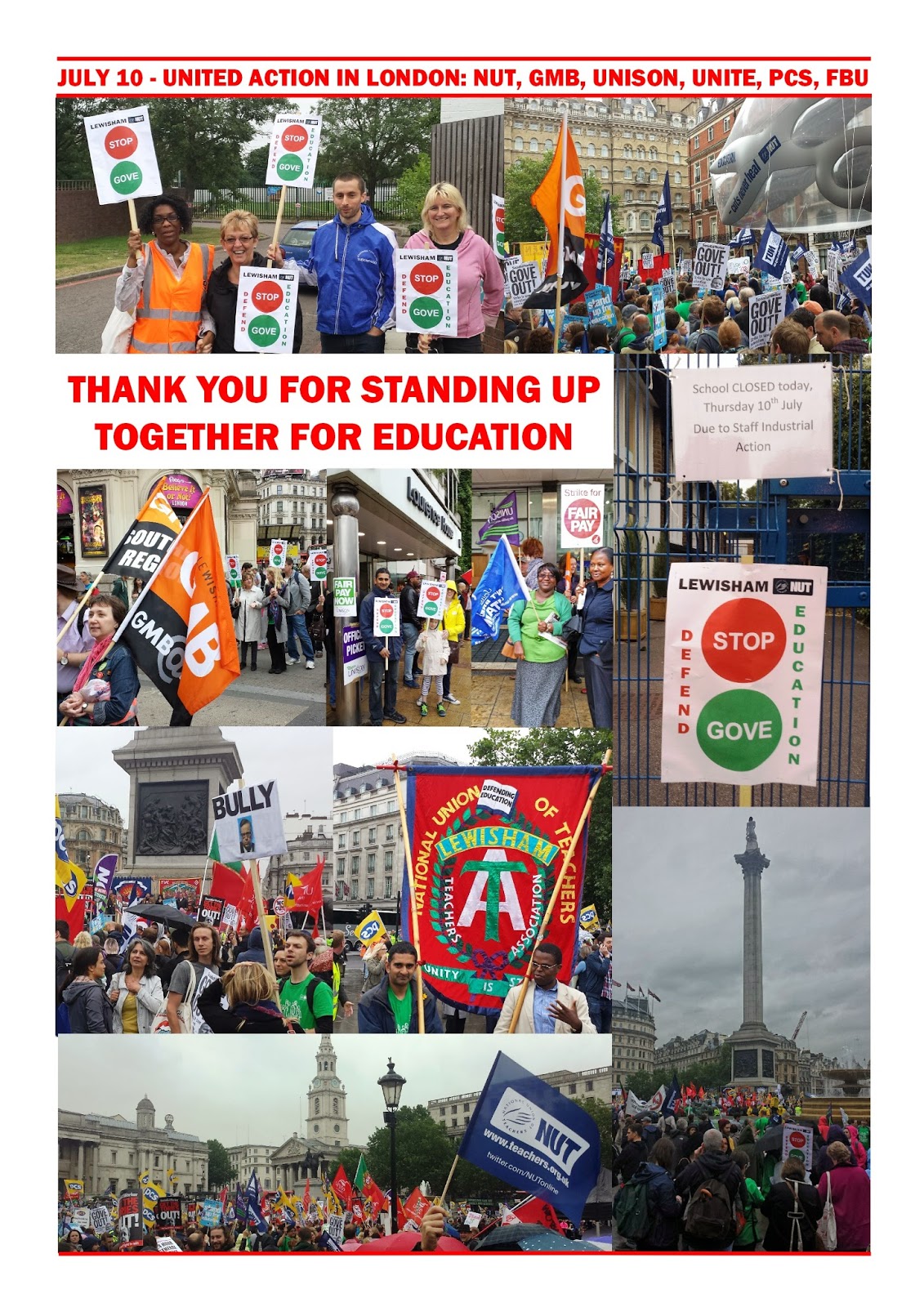 Today's strike has been well supported by teachers, other public sector workers and the public as a whole - as even the Daily Telegraph's supportive poll results showed.

The fact that Cameron has attacked the strikes is clear proof that the action IS having an impact! It was also telling that even the BBC News this evening commented about plans for further co-ordinated action in September.

However, listening to the radio discussions as I travelled between picket lines this morning, I noted that one issue was consistently being discussed in an attempt to divide parents from teachers -  the threat of fining parents when workers take a family holiday in term time.

The NUT needs to make crystal clear that it is not teachers who want to impose these fines but school managements under direct pressure from the Government - the same Government that is attacking teachers and support staff too. Instead of being divided, staff and parents have to unite together to oppose Government attacks.

I have reposted below part of a post from my report of the NUT National Executive in May which took up this very issue:

"A short but important discussion took place on the Salaries Committee in response to a letter from the RMT pointing out the difficulties facing rostered and shift workers in taking family holidays when their leave might only be made available to them during term time. This is a problem also facing many other working families and, as was raised in discussion, similar pressures also face migrant families as well.

In the past, many schools would have taken a more relaxed attitude to requests to take children out of school for holidays or overseas visits. Now, with schools under immense pressure to achieve both ever-improving exam results and attendance rates, more Heads are refusing to authorise absence requests with, under new legislation, some parents facing fines as a result.

This draconian approach amounts to discrimination against working-class families who are unable to choose the timing of their annual leave - and ignores the benefits of families being able to have such a break together. As the actual government guidance says, head teachers will want to consider "the frequency of the request; whether the parent gave advance notice; and the pupil's attainment (sic), attendance and ability to catch up on missed schooling".

Surely it would be better for parents and schools to come up with suitable arrangements for students to try and catch up on missed schooling rather than to threaten fines and unreasonably refuse holidays?

Above all, the NUT needs to make clear to the RMT, other trade unions and parents, that we do not back a draconian approach being taken towards holidays - and that we will not allow the issue to become a way that Government legislation can be used to divide parents from teachers".

Original post on May 22:  http://electmartin1.blogspot.com/2014/05/nut-national-executive-report-prepare.html
Posted by Martin at 22:37 2 comments:

Updated during the day ... 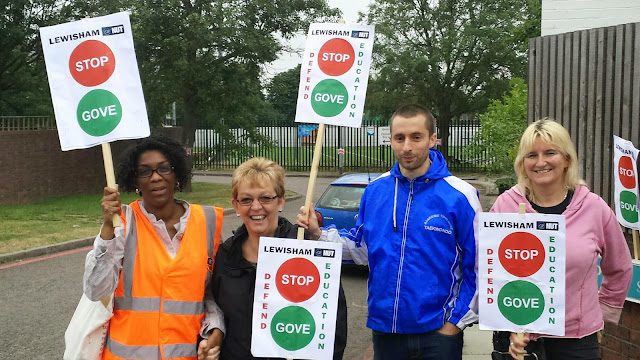 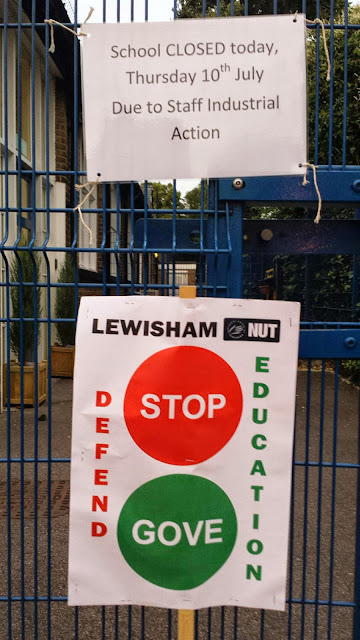 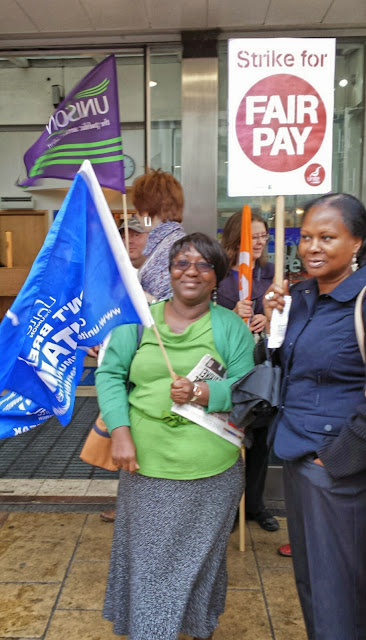 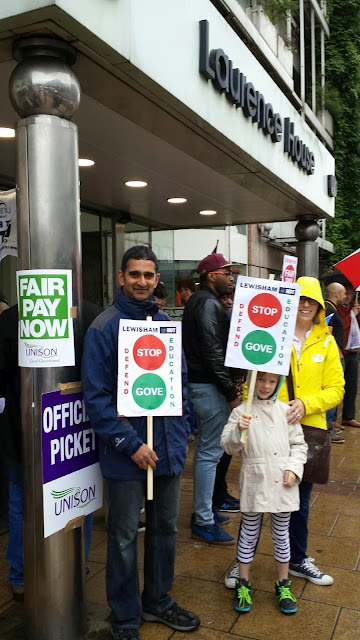 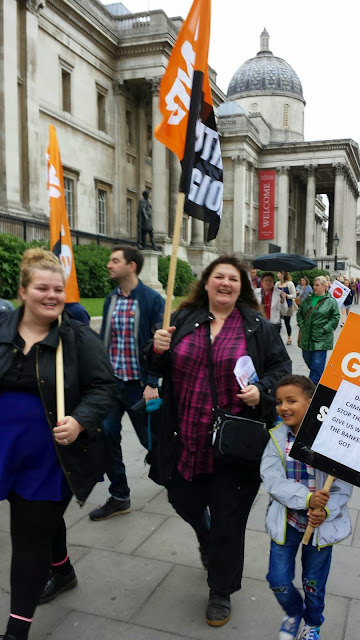 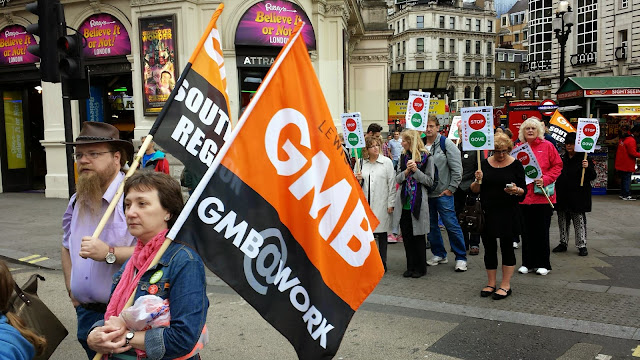 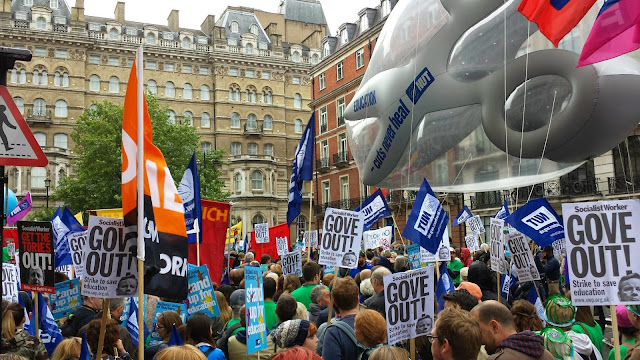 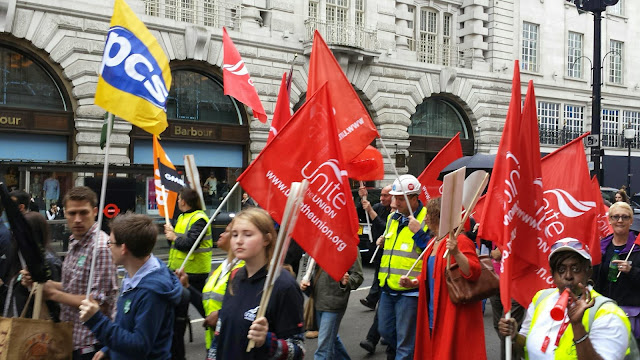 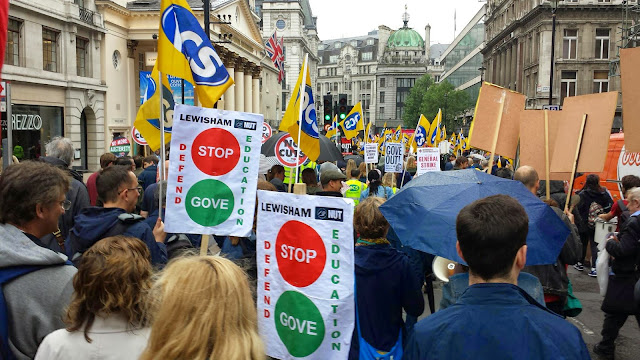 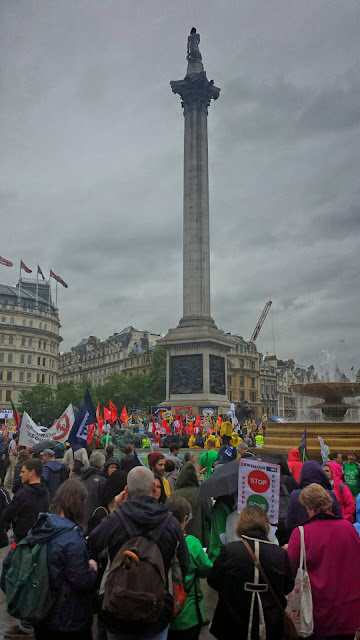 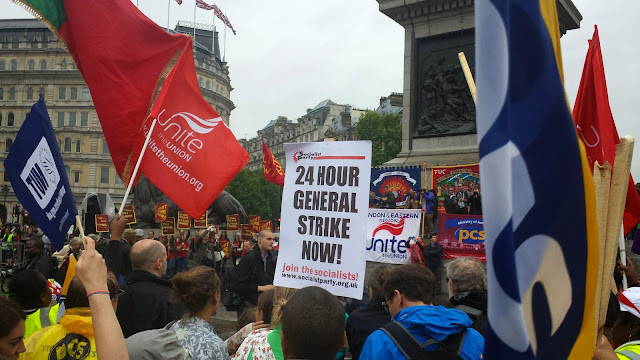 As the picture shows, reports coming in from schools across Lewisham indicate a solid response to tomorrow's strike action: 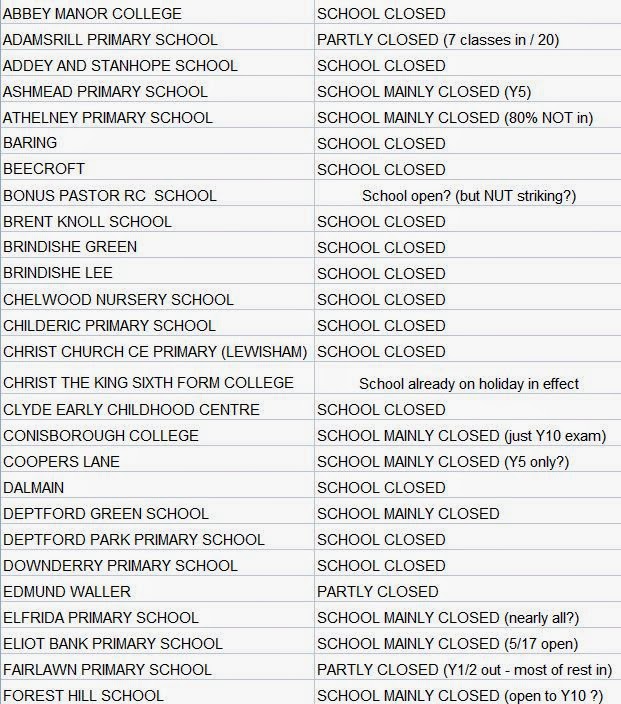 I was also pleased to get coverage of the strike in the South London Press, and particularly that they included my call for parents to join us on the march to Trafalgar Square so that we can protest together about the damage that Governemnt policies are doing to education and public services: 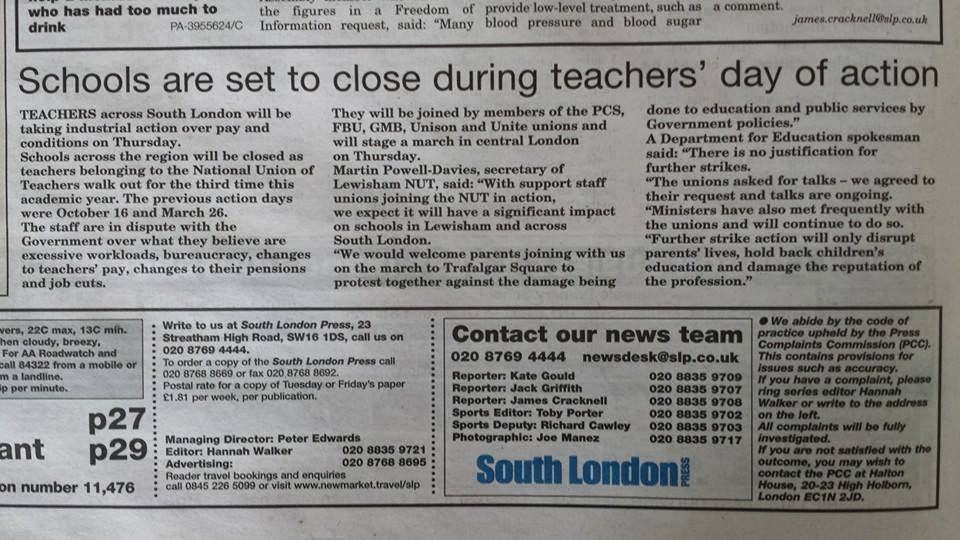 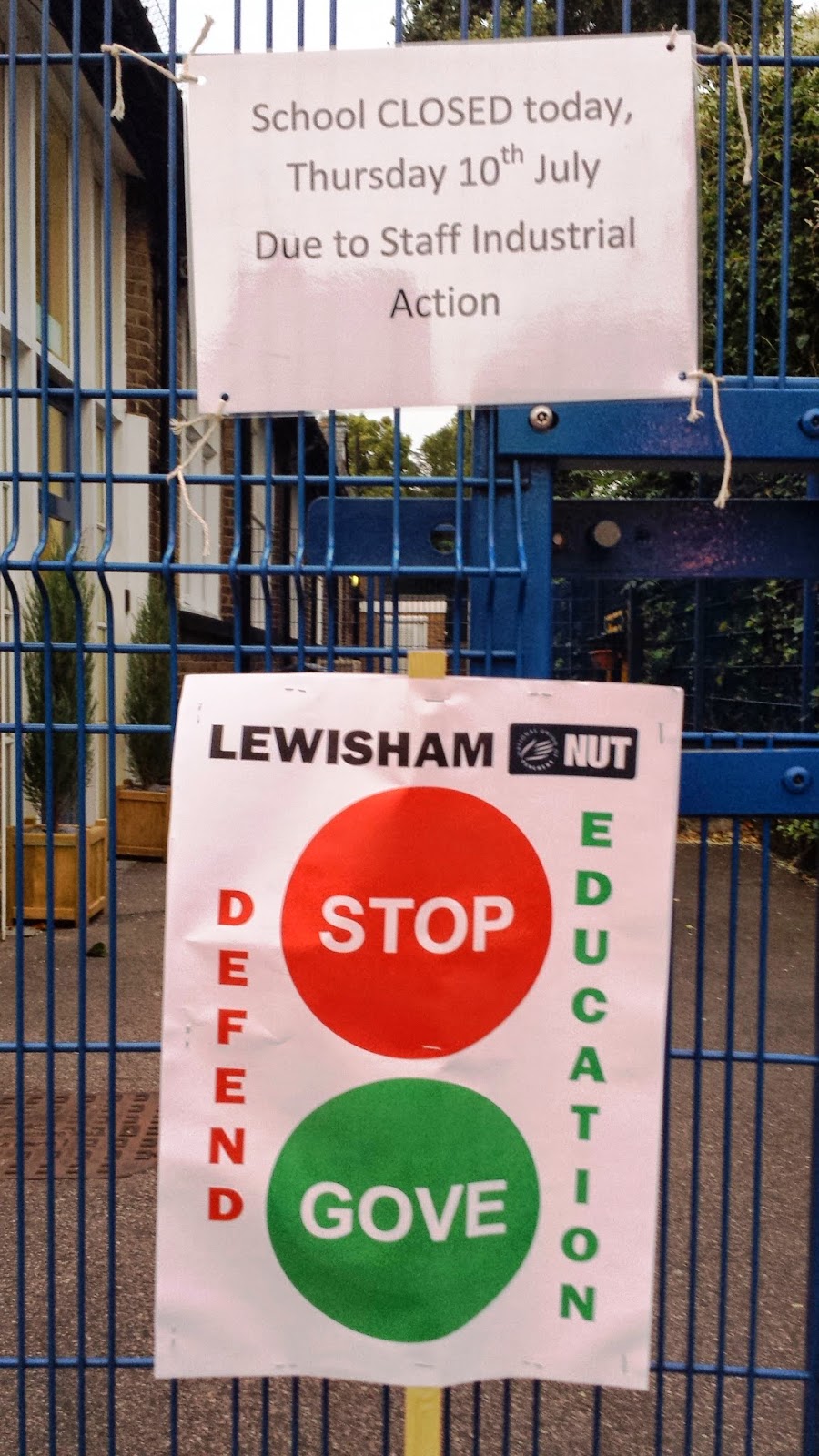 Let's strike together to defend education and public services tomorrow!
Posted by Martin at 15:58 No comments:

LANAC have produced a bulletin for Thursday's strike:

Here is what the leaflet says:

Today nearly two million public sector workers will be taking strike action, among them the 300,000-plus members of the NUT.

While our support staff and other local government brothers and sisters are fighting for a decent pay rise in place of the paltry 1% offered by their employers, we are continuing to demand fair pensions, national pay entitlements for all and real measures to reduce workload.

Even though mid-July is not the perfect day for action in schools, it was absolutely right to co-ordinate our action with other and larger public sector unions.

July 10th means that workers,  the public and the government will get just a glimpse of the potential power of the trade union movement. That experience can give huge confidence and hope to all of us. In LANAC we think that this hope can only be turned into reality if we draw the right lessons. Most important of all is the recognition that we can do more than just protest. We can win !

What needs to be done

We need to move away from occasional one-day protests and develop a plan of action that is designed to win. Days like July 10th and March 26th are inspiring and impressive but we are not on strike to put on a show for a day and then see things carry on just as grimly as before; we are serious trade unionists who aim to resist the attacks on our pay, pensions and conditions.

Workers win when they organise action that puts the employer on the spot. Trade union members respond better when they see a meaningful plan. LANAC says: 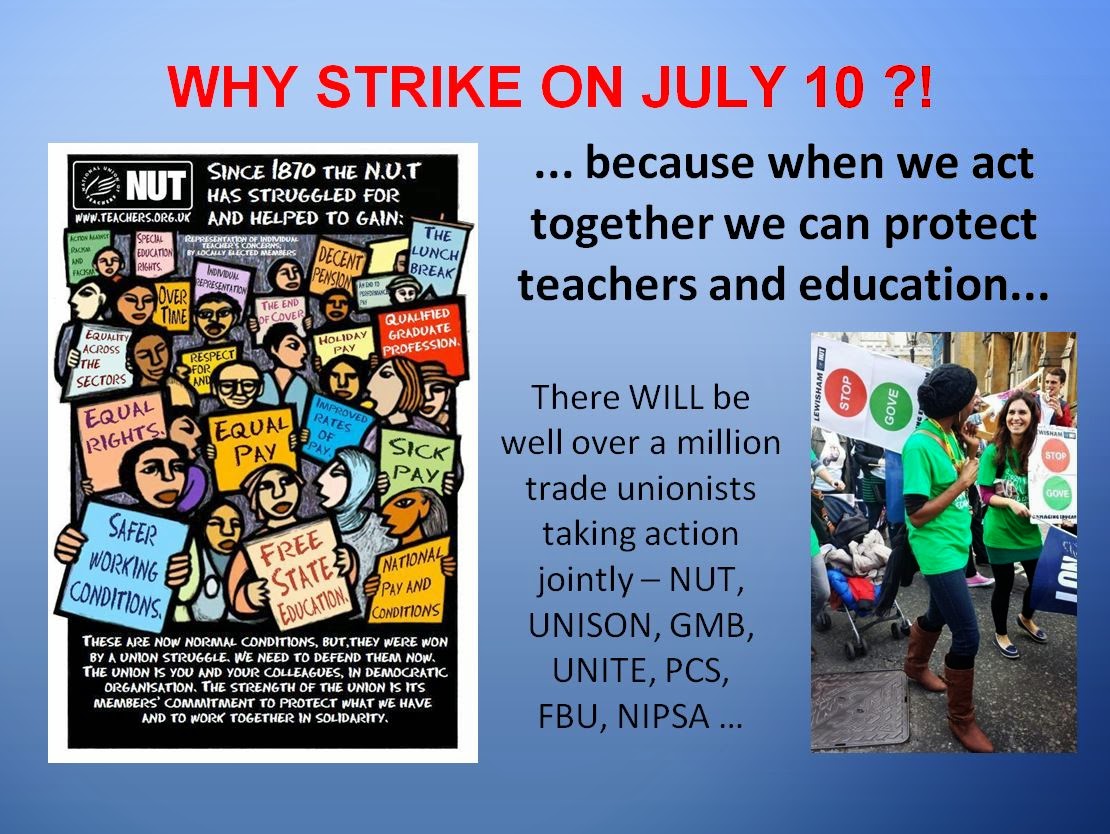 Well over a million trade unionists are preparing to take strike action on Thursday July 10th. As the joint union flyer for the London rally in Trafalgar Square states, we are striking together for "Fair Pay, Fair Workload and Fair Pensions". In defending public sector workers, we are also defending vital public services too.

After a meeting between Michael Gove and the NUT GS and DGS this morning, the NUT has written to point out that the Secretary of State's response so far on all these issues ( in regard to teachers )  has not been anywhere near good enough. On pay, Gove has announced that 2014 will be the last year when a national set of teachers' pay points will be published and that schools can even now pick-and-choose who gets the annual pay award. On pensions, Gove and the Government still claim that 68 can somehow be an appropriate normal age of retirement for a teacher.

On workload, teachers continue to work far longer than even the EU's 48 hour weekly directive. Demands on planning and marking have been ratcheted up even further, driven by the pressures of Ofsted and performance-pay.

Thanks to the Union's action, the DfE have released some advice that contains a few useful nuggets about, for example,  evidence being linked to appraisal objectives and not 'simply results' and Gove has confirmed that "a lesson plan is not required for every lesson". However, the threatening accountability system he is ultimately responsible for ensures Heads will continue to demand ever more evidence and workload from their staff.

The new DfE advice still makes clear that some teachers could be told they will not receive pay progression - and some Heads are already starting to tell teachers they will be losing out in September.

Teachers must keep up the pressure on Gove - and also warn any Heads thinking of blocking pay progression of teachers' strength and determination - by striking solidly next week, alongside our support staff and public sector colleagues.

If we are to win significant gains from Gove, then that action must continue and escalate after the summer break. A union-wide consultation exercise at the beginning of next term will be asking NUT members what action they are prepared to take to continue our campaign. LANAC will be urging NUT members to make clear that, having come so far, and facing such severe threats, we have no option but to do what it takes to stop Gove.