The campaigning work around school cuts has helped to make it a central issue in many voters' minds when they go to the polls on 8 June.

All of the main parties have had to respond by making some kind of pledge that they will act on school cuts. However, not all of those promises are quite what they seem. That's why it's worth checking out the facts on the updated school cuts website to see the impact on your local school. Here's mine: 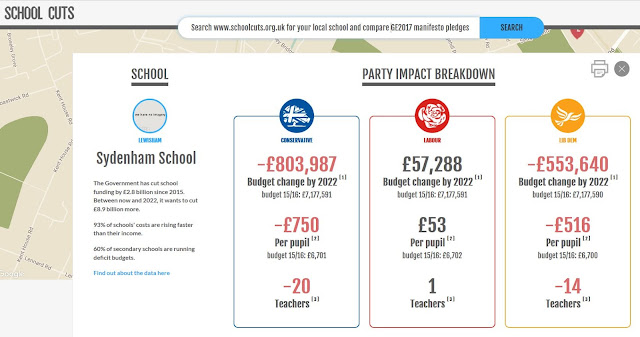 Why the stark differences between Tory and Labour pledges?
The Conservatives’ are only promising to give only £1 billion per year - but schools are facing a £3bn real terms cut in their annual funding by 2019-20 - and that's according to the National Audit Office, not the NUT or the political parties.

As the NUT said in response to the Conservative manifesto: “The £1 billion promised does nothing at all to cover the present crisis. Schools already need £2.2 billion more just to cover the impact of inflation and cost increases imposed by the Government since it was elected just two years ago. Class sizes will still go up, school staff will be reduced, subjects will be dropped from the curriculum, and school buildings will continue to fall into a state of disrepair ... In contrast, the Liberal Democrats are pledging to put in that £3 billion per year and Labour £6.3 billion per year by 2020/21".

Check the facts - and Vote for Education on 8 June
In an election where the facts are often being hidden under a cloud of partisan reporting from the mainstream media, it's worth taking a look on the schoolcuts website and sharing it with your friends and family. You can also use it to email your local candidates to ask them to respond.

Luckily, young people in particular are not so easily taken in - have a look at the reaction to this acceptance speech by the 'Prom King' at Sydenham/Forest Hill VI Form last week:

Vote for education on 8 June !

STOP PRESS: Help Get the message out in your streets:
There has been so much support for the School Cuts campaign that the NUT has ordered extra copies of a newly designed leaflet to be delivered by volunteers in their local area.  To order leaflets and/or to volunteer to organise leafleting, use this link:

Forest Hill - 10 financial questions that need to be answered

Sadly, unjustified accusations have been levelled at Forest Hill NUT members over the last few days. Yet the people that should really be being questioned are those who are refusing to act to provide the additional financial support that Forest Hill School needs.

These dedicated teachers, who work so hard to support FHS students, are being accused, at worst, of striking without any thought as to how it might damage children's education. On the contrary, they are seeking to prevent the lasting damage that will be caused when a school is told to make £1.3 Million of staffing cuts and then also find the £0.5 Million that has to be paid out when you make so many staff redundant.

Others, perhaps with more sympathy, are telling NUT members that, while their campaign is understood, it has to stop because they are fighting a cause that cannot be won. Parents and staff are being told that there is nothing that can be done, that the Council and School have no room for manoeuvre, and that the cuts simply have to be made.

The NUT does not accept that nothing can be done. Firstly, we believe that something HAS to be done both to make sure that posts are retained to support the most vulnerable pupils and also to address the very real danger of a teacher retention crisis at the school.

So, instead of simply repeating the mantra that 'there is no alternative', we would like the Council to answer the following ten questions:

a) Why have the cuts fallen so heavily on the staffing budget?

1) The National Audit Office has recently warned that reducing the proportion of spending on teaching staff before other areas of spending increases the risk that "schools will make poorly informed decisions that could have detrimental effects on educational outcomes”. So why have the cuts at FHS fallen so heavily on the staffing budget?

b) What cuts can be made to the non-staffing budget?

3) The school budget forecasts include a £100,000 figure for 'contingency'. Rather than put money aside for the future, shouldn't it be spent on addressing the immediate problems?

4) While staffing expenditure is (we believe) being disproportionately cut, there are a number of non-staffing headings that are being increased significantly. These include ICT, the PFI Unitary Charge, 'bought in professional services' and 'professional services'. Just these four items total over £1.5 Million. Is it really not possible to cut some of these costs instead of cutting so many staff?

c) What assumptions have been made about staffing costs and future income?

6) It appears from what the NUT have been told that the budget forecasts for staffing costs assume that the problems facing all schools - of income not meeting the actual costs of NI, pension and pay - will continue. Yet all three of the main parties have, to a greater or lesser extent, suggested there might be some additional expenditure on schools after the General Election. Whatever happens, the campaign to oppose school cuts is gaining strength. Why not postpone some of the cuts and then allow parents, staff, unions, school and Council to all work together to demand these national promises are kept?

d) Why not act as a responsible lender and restructure the loan repayment or use the other powers under your Scheme of Delegation to support the School?

7) Lewisham Mayor and Cabinet agreed last November that, as long as a recovery plan making £1.3M staffing cuts was put in place, they would loan Forest Hill School £879k to be paid back over a five year period in order to cover the school’s immediate budget shortfall. To support a school in similar difficult circumstances, Greenwich Council has just agreed to extend the loan repayment for one of their maintained schools from five to seven years. Why can't Lewisham Council do the same?

8) Greenwich Council also supported this school through directing funding towards it for specific purposes. Lewisham's Scheme of Delegation also states that "the LA is authorised to make sums available to schools from central funds, in the form of allocations which are additional to and separate from the schools’ budget shares". Why can't Lewisham Council act on this provision?

9) Lewisham's Scheme of Delegation also states (when discussing who pays for redundancy costs under Section 37(5) of the Education Act 2002) that "costs incurred by the LA in respect of the dismissal of any member of the staff of a maintained school shall not be met from a school’s budget share for any financial year except in so far as the authority have good reason for deducting those costs". So what good reason does the Council have for making Forest Hill School pay £0.5 Million in redundancy costs itself?

10) The Scheme of Delegation also states that  "any amount payable by the governing body to the local authority may be met out of the school’s budget share for any funding period if the governing body is satisfied that meeting the amount out of the school’s budget share will not to a significant extent interfere with the performance of any duty imposed on them by provisions specifically of section 21(2) Education Act 2002 (conduct the school with a view to promoting high standards of educational achievement)". Are the Governing Body satisfied that these significant staffing cuts will still allow them to carry out this duty to promote such high standards?
Posted by Martin at 18:59 No comments:

Email ThisBlogThis!Share to TwitterShare to FacebookShare to Pinterest
Labels: FHS

PRESS RELEASE - 19 May 2017
Martin Powell-Davies, NUT London Regional Secretary, said:
“The NUT, with the support of the Forest Hill Parents’ Action Group, has spent the last two months campaigning, leafleting, lobbying councillors, holding rallies and meetings, and also having to take eight days of strike action. All of this has been done to try and persuade Lewisham Council to recognise the damage that £1.3 million of staffing cuts is going to do to Forest Hill School and to act to prevent that damage.
Unlike other employers who have acted to resolve similar disputes and provide additional financial support, for example as Greenwich Council have done in relation to Plumstead Manor School, Lewisham Council have remained intransigent. As a consequence nearly 40 posts will be being cut from the school from September cutting vital support for Forest Hill students.
No teacher takes strike action lightly. Forest Hill NUT members have been striking because they know that cuts to jobs and working conditions mean cuts to the education of the Forest Hill boys that they have put so much time and dedication into supporting.
Teachers know that the next few weeks when external exams are taking place are particularly important for students. That is why Forest Hill NUT members had already voted to withdraw strike action notified until 15th June and have informed the Headteacher of their decision.
However, teachers know that the lasting damage will be caused by the £1.3 Million staffing cuts, added to by the budget cuts having to be made to pay the £0.5 million in redundancy costs that have resulted from losing so many teaching and non-teaching posts at Forest Hill. That is why they are certainly not ending their campaign, and will return to strike action if necessary.
NUT members do not wish to return to strike action but neither are they willing to sit by and see both the Council and, regrettably, the School Management, denying the damage being caused, failing to answer to the financial decisions they have taken, and refusing to reconsider their proposed cuts. NUT members are also angered that, while the School management can present their arguments directly to students and parents, NUT members views are being misrepresented or simply not heard at all.
That’s why the NUT has challenged the School to agree that, in the interests of a clear and open debate and to make sure parents are fully informed of what is happening at their children’s school:
•          A statement from the NUT is sent out to parents via the school’s official written channels outlining the NUT’s position
•          A member of the Senior Leadership Team attends a parents’ forum, preferably to be held at the School, and debates with representatives from the NUT and the FHS Parents’ Action Group