In April, Education Secretary Gavin Williamson announced that he wants all schools to become academies. While educators have rightly learned to treat Williamson’s ill-considered pronouncements with disdain, it was nevertheless a warning that this Government still plans to push further towards doing away entirely with any kind of democratic local control over education through elected Local Authorities.

A push for further academisation by Ministers risks more Governing Bodies wondering if they should ‘jump before they are pushed’ into joining a Multi Academy Trust, particularly if the Labour Party’s previously firmer opposition to academisation weakens under its new leadership.

Meanwhile, the legislation that forces unwanted academisation onto schools deemed to have been ‘failed’ by Ofsted will continue to do its damage.  But the tenacious struggle by staff and parents at Moulsecoomb Primary in Brighton to defend their community status shows how firm opposition can  – and must – be built and given our full support.

Instead of allowing further academisation, educators, parents and unions need to step up our calls for an end to academisation and for the return of schools to genuine democratic local control where they can work together in meaningful partnership, funded to fully meet needs, and with all staff employed under national agreed pay and conditions.

5 reasons to oppose an academy transfer:

The academisation of schools has been just one aspect of a global drive to break-up state education and impose an education market of competing chains of schools. In England, Ofsted, SATs and exam league tables have been the weapons used to unfairly grade and compare both schools and school students, creating a culture of ‘failure’, instead of genuine school improvement.

Aside from the right-wing ideologues that believe in the magical powers of the ‘market’, it will come as no surprise to most people that the research evidence has consistently shown that academisation does NOT result in improved educational attainment.

The results of a four-year evaluation published by researchers at the UCL Institute of Education in 2018 concluded that “there is no positive impact on the attainment and progress scores of pupils in MATs when compared to equivalent non-MAT schools”. It also noted that “pupils in larger MATs did worse, particularly in secondary schools”.

The research also pointed out the damaging effect of the marketisation of schools on education as a whole: “Schools are facing pressure to get good exam results and Ofsted grades, or face being taken over by a MAT. Many schools have felt the need to narrow their curriculum and focus relentlessly on test outcomes in response”.

The Education Policy Institute’s analysis of primary school results also noted that while “Local authorities make up 15 of the top 20 school groups at Key Stage 2 … academy chains are over-represented in the lowest performing groups”.

This mirrors the findings of the House of Commons Education Committee that “We have been unable to locate any evidence ... of a relationship between primary academy status and raised attainment”.

2. Academisation and the ‘market’ in education have increased inequality

Instead of encouraging genuine school improvement, through sharing of good practice, reduced workload, better training and support, and funding to meet needs, the marketisation of schools has done the opposite.

The pressure of league tables and Ofsted gradings has encouraged schools to ‘game the system’, changing their intake to improve results at the expense of their ‘competitors’, rather than genuinely improving education for all. Research has shown that Multi-Academy Trusts have particularly failed to meet the needs of disadvantaged pupils.

Fragmentation, and the undermining of national pay and conditions and facility time arrangements through academisation, has also increased inequality for staff as well.

The marketisation of education has to be reversed, including reversing academisation.

The authors of the 2018 UCL Institute of Education research spelt out what is happening:

“The system is hard-wired to encourage selfish behaviour, because the consequences for schools of a drop in exam scores or Ofsted grade can be so catastrophic. At present we see a chaotic system of winners and losers, with increasing incoherence and a loss of equity as a result”

"Lower-status schools frequently face a concentration of challenges including under-subscription, movement of pupils throughout the school year and disproportionate numbers of disadvantaged and hard to place children. These schools were also most likely to report a negative impact as a result of austerity cuts to wider local services for the most vulnerable children, previously provided by local authorities."

Research from the Sutton Trust concludes that “Two-thirds of academy chains perform below the national average for all state schools on key measures of attainment for disadvantaged young people.  Improving their educational achievement was [supposedly - MPD!] the original reason why academies were set up.  In this regard they have not succeeded”.

The British Journal of Sociology also found that academies are more likely than other schools to employ teachers who are unqualified. “The greatest increases are among those structured more like businesses — academies run by government-approved sponsors or belonging to a chain of schools”.

Pay inequality for staff working in academies is also consistently shown in the Government’s school workforce data. The latest Government report confirms that “Average salaries for classroom and other leadership teachers are higher on average in LA maintained schools than academies”. However, pay inequality is also greater within academies too. The school workforce report also notes that: “The average salary for headteachers is however, higher in academies than in LA maintained schools”.

Of course, MATs have not just been spending their budgets on increasing Headteacher pay. Schools Week have dubbed the extortionate top salaries in some MATs as an “emerging ‘super league’ of academy trust CEO pay”. Here is their “top ten”:

3. Becoming an academy will not protect your school from budget cuts

Just as in the NHS, imposing a market on schools was supposedly meant to improve ‘efficiency’. The lack of accountability that comes with privatisation instead risks spending being diverted to cronyism and pay rises for those at the top.

But, overall, the break-up of state education has been a mechanism to cheapen the cost of education, both by making it easier to cut the Local Authority services that schools used to be able to rely on, and by driving down staffing costs. That’s because the fragmentation of education into so many different employers has helped to weaken trade union organisation and to undermine nationally agreed pay and conditions.

While, in the initial drive to encourage academy transfers under Tony Blair, financial incentives were provided to encourage schools to convert, academisation is certainly no longer a way for governors to protect themselves from budget cuts. In fact, without the support of a Local Authority, an academy leaves itself more exposed. The most recent National Audit Office report into schools’ financial sustainability – last compiled in 2016 – confirmed that a greater proportion of academies were running annual deficits than local authority maintained schools: 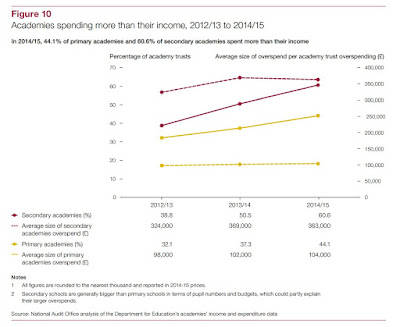 Criticism over the extent of “related-party transactions” being carried out by academies - payments to individuals or organisations with which senior staff have relationships – led to a tightening of Government regulations. But, without genuine democratic oversight, the issue is not going to go away.

For example, the TES reported on one expanding Multi Academy Trust based in Wakefield spending nearly £40,000 on related-party transactions in 2018/19 alone.

Academisation was sold to schools as a way of giving them ‘freedom’ from the ‘bureaucracy’ of a Local Authority. Certainly, when schools are returned to   local democratic control, it must also be done in a way that ensures there is a genuine voice for schools, staff, parents, unions and the wider community. For example, the recent proposals from the Socialist Education Association call for an elected education committee or board.

In reality, academisation has provided no genuine ‘freedom’ at all. Instead it has allowed greater Government centralisation and the growth of unaccountable Multi Academy Trusts where parent, staff and student voices are rarely heard.

Once converted, schools become a commodity that can be transferred from one MAT business to another without their say.

Supporters of academisation continue to argue that MATs can just takeover the roles that Local Authorities used to provide, including the educational partnerships and collaboration needed for genuine school improvement.

But, as the 2020 UCL research quoted above puts it: “MATs are commonly referred to as a form of partnership, but we argue that this is inappropriate … We argue MATs are best understood in terms of ‘mergers and acquisitions’, with prescribed models of governance and leadership largely derived from the private and, to a lesser extent, voluntary sectors”.

Those models of governance leave key decisions in the hands of a small Trust Board. Individual school governing bodies within a Trust have little power, if, indeed, they are allowed to exist at all by the MAT.

As a 2019 House of Commons Public Accounts Committee report explained “Parents and local people have to fight to obtain even basic information about their children’s schools, and academy trusts do not do enough to communicate and explain decisions that affect the schools they are responsible for and how they are spending public money.”

But if parents and Governors want to change their mind and return to Local Authority maintained status, it’s too late. The current legislation means that a decision to become an academy is irreversible. What’s more, once that transfer has happened, the Government is entitled to then transfer a school to a new Trust, without any further say by staff, parents and Governors. Over a thousand academies have been ‘re-brokered’ to new trusts in the last five years.

And, of course, the tendency is towards ‘monopoly’ – with smaller MATs being taken over by a few larger corporate MATs who would then dominate public education without any real democratic oversight.

5. Schools will do far better in partnerships without becoming academies

The real solution to ending the chaotic and damaging fragmentation of state education in England is to return all schools to democratic local control. But, until then, remaining maintained schools need to resist the pressure to convert and develop their own school partnerships instead.

While educational research continues to show that the academisation is failing education, it also shows that what really works is genuine partnership between local schools within a Local Authority.

For example, the successful school improvement initiatives around the London Challenge from 2003-2011 were based on local support for teaching and learning, not academisation.

Some groups of schools are working well in partnerships as local authority schools.

For example, in response to Gavin Williamson’s announcement in April, Harry Kutty, Chair of the Aspire Community Trust, a group of maintained schools in Southampton, tweeted “It’s not all about MATs. It’s about collaboration, culture and a pursuit of the very best experience and outcomes for all. Suggesting that only MATs can create systems around these principles is simply not true”.

Of course, if Local Authority services and education budgets continue to be cut, then the resources needed to meet all students’ needs, and to develop genuine partnership and school improvement, will be even harder to find. That’s why, in opposing academisation, we also have to fight for education funding and oppose cuts to local authority services.

We must make clear that academisation doesn’t provide any way forward. In fact, it is part of a deliberate strategy to help governments drive down the costs of education. Instead, we have to organise to defend all schools fighting academisation and demand a return of all schools to democratic local control, funded to meet the needs of all. 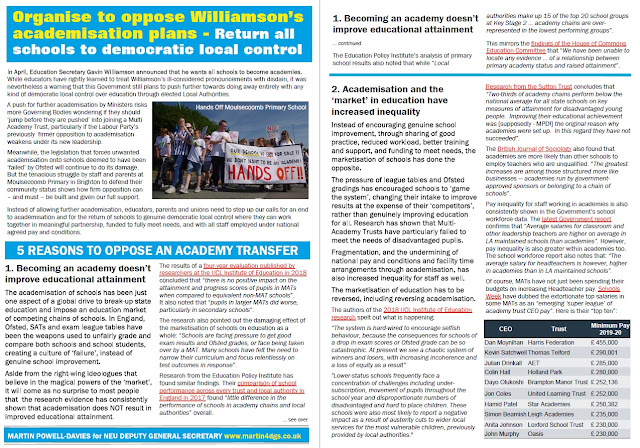 And visit my Martin4DGS campaign website for further information here. 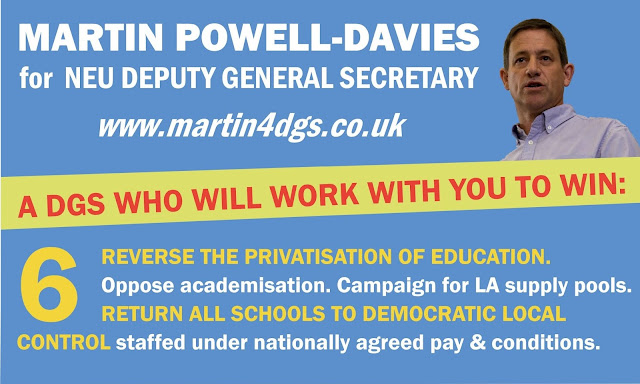