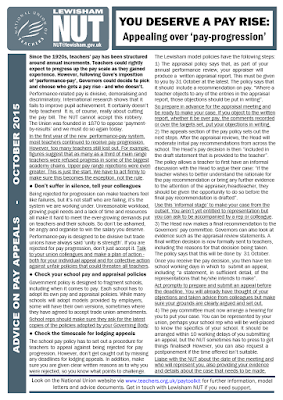 Further detailed advice follows which can be downloaded as a leaflet or, for copying to use elsewhere, downloaded as a text file from https://goo.gl/kdhx9c
Posted by Martin at 17:55 No comments:

A weekend when the pendulum swung back to the left

This has been a historic weekend. For decades, Westminster politics has been dominated by right-wing, pro-big business policies. Now, after the crushing victory of Jeremy Corbyn in the Labour Party leadership election, that pro-austerity consensus has been shattered. 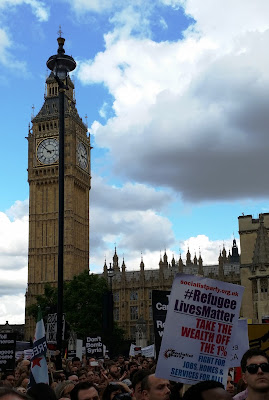 For years, the press and the Tories, echoed by those in the New Labour machine (like Tristram Hunt the now EX-Shadow Education Secretary!) and even some in the trade union movement, have been telling us that 'anti-austerity is unpopular'. That's just not been true, it's just that the real mood of the majority has never (certainly south of the border) had a significant outlet. Now it has!

The news of Jeremy's victory coincided with a march of perhaps 100,000 through London in defence of refugees. That alone showed that the real public mood is in sharp contrast to the anti-migrant rubbish that is printed in too much of our press. Of course, the 'divide-and-rule' propaganda will resurface but a battle against austerity and for jobs and homes for all can help make sure it is cut across successfully.

I volunteered to steward on behalf of the NUT and, as luck would have it, was stationed by the stage when Jeremy Corbyn came to give his first public speech - just hours after his election. Here's my footage of the opening of his speech:

The confidence boost that Corbyn's victory had given to trade unionists was also visible at today's packed pre-TUC rally in Brighton hosted by the National Shop Stewards Network, addressed by many of the main left trade union leaders. A determined note was struck by all who attended - that we won't allow the Tories to steal away our rights and that we must strike together to defend any trade unionist who falls victim to these new laws - just as we have in the past. 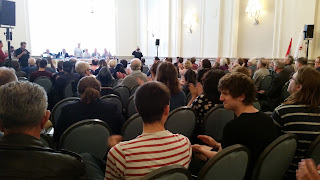 A different period now lies ahead of us. Things will certainly not move in a straight line in building a mass anti-austerity movement - as Greece has shown. The old guard of New Labour will fight tooth and nail to keep hold of what they won for big business. There are some in the new Shadow Cabinet, not to mention the rest of the Parliamentary Labour Party, that cannot be relied on to stand firm. A battle will have to be fought both inside and outside the Labour Party - as Hannah Sell of the Socialist Party explained on Sky News:


Jeremy Corbyn’s victory has lifted the confidence of all those who oppose austerity and has already dealt a blow to the establishment. Now teachers have to take heart, take courage and take action to fight for our pay & conditions and for education.
Posted by Martin at 22:31 No comments:

TUC research released today reveals that "the number of people working excessive hours (more than 48 hours per week) has risen by 15 per cent since 2010".

As the TUC explains:  "Regularly working more than 48 hours per week is linked to a significantly increased risk of developing heart disease, stress, mental illness, strokes and diabetes. Illnesses caused by excessive working time put extra strain on the health service and the benefits system, as well as impacting on co-workers, friends and relatives. Many people are working unpaid overtime and at least a million report that they want to cut their excessive hours".

There is an alarming rise in the numbers working these excessive hours in a number of professions - including teaching. The TUC reports that many employees report that they feel pressured to ‘opt-out’ from the 48 hour limit ( legislated for under the "EU Working Time Directive" ) - as individual opt-outs are currently allowed by law. However, for teachers, there is no such contractual opt-out - the Working Time Directive is included in the Schoolteachers' Pay and Conditions Document. It's just that schools are ignoring the law!

As I wrote on this blog earlier this month, "Perhaps in the past, teachers have felt wary about complaining when they know that the issue of ‘teachers’ long holidays’ will be thrown back at us. However, even assuming (completely wrongly) that teachers only work during term-time (and never in their holidays) then a 60-hour week for 39 weeks a year amounts to 2340 annualised hours. Someone in a different job working as much as 40 hours for 46 weeks a year still works only 1840 annualised hours. That’s broadly equivalent to teachers working the supposed ‘legal maximum’ 48-hour week for all 39 weeks of term-time. If the worker was contracted for a more reasonable 37 hours a week for 45 weeks a year, that would come out as 1665 hours – equivalent to a teacher working 43 hours over 39 weeks ... The issue is complicated by the Regulations stating that workers have to calculate their average hours over a 17-week ‘reference’ period, which would then include holiday periods. However, even including holidays, surely most schools are breaching the Working Time Regulations in the demands they are putting on teachers over all but the summer break?"

Kevin Courtney, deputy general secretary of the NUT, responded in the TES that the TUC figures were “alarming” and that “so much of teachers’ extra work is unproductive ... the work is done to feed the accountability machine, not to help children grow intellectually. That makes it all the more outrageous.” Kevin adds that "schools faced a “quadruple whammy” of teacher-supply problems: rising pupil numbers, rising numbers of teachers leaving the profession, fewer people entering the profession and a growing economy that would make other jobs more attractive to potential teachers. Teachers’ heavy workload would worsen the problem".

Of course, these figures will be of no surprise to teachers. They only continue a trend of increasing workload that has been continuing now for years. The question is, what action can teacher unions take to stop it?

The NUT's 8-point action programme called on Nicky Morgan to "adopt an immediate target for a reduction in teacher working hours across England and Wales and begin the phased introduction of binding limits on teacher working time". She failed to introduce any such limit and, as today's TUC figures show, the problem is getting worse, not better.

Nobody can teach to their best when they are working 60 hours a week - yet even Government figures concede that this is typical for many teachers. To protect our working conditions - and children's learning conditions - we have to start taking action - whether at a school, employer-wide or national level -  to start to make that demand a reality.

How can we build the action needed? Come and join the discussion at the next LANAC Steering Commitee on Saturday Oct 3, 12 to 4pm, Jack Jones House (Unite the Union building), 2 Churchill Way, Liverpool L3 8EF. Even better, stay overnight and join the Lobby of the Tory Party Conference in Manchester the following day! 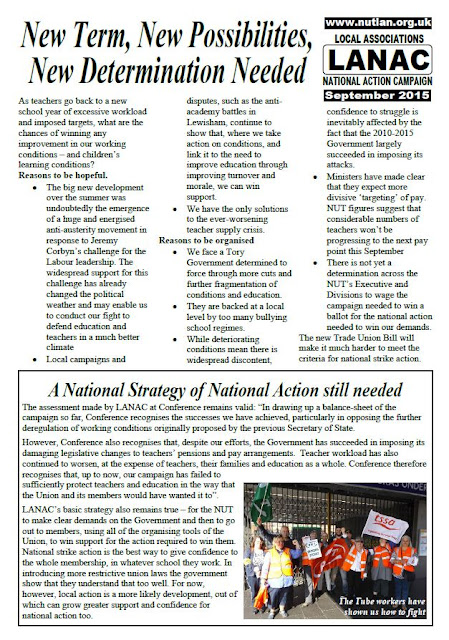 The NUT recognises that a fair appraisal system can support staff development needs as well as improving pupil outcomes. However, linking appraisal to performance-pay presents a very real danger to both teachers and education.

International research warns that performance-pay fails to improve pupil achievement. It divides, discriminates and demoralises, distorting teaching  and undermining collaborative work. It is, of course, really about cutting the teachers’ pay bill. 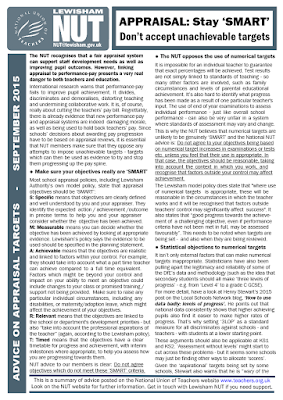 Regrettably, there is already evidence that new performance-pay and appraisal systems are indeed  damaging morale, as well as being used to hold back teachers’ pay. Since schools’ decisions about awarding pay progression have to be based on appraisal reviews, it is essential that NUT members make sure that they oppose any attempts to impose unachievable targets - targets which can then be used as evidence to try and stop them progressing up the pay spine.

Lewisham NUT has issued an advice document to its members, based on various reference documents on the national NUT website. It can be downloaded here or, in a text version to adapt for use in other areas.
Posted by Martin at 09:24 No comments: