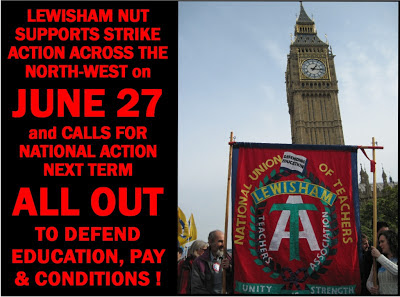 Another week, another attack from Michael Gove. This time he’s set out for the School Teachers’ Review Body (STRB) a list of the next attacks that he wants them to recommend: This time it’s about slashing our working conditions, on top of cutting our pay and pensions.


A WORD version of this information can be downloaded from the Lewisham NUT website on http://local.teachers.org.uk/templates/asset-relay.cfm?frmAssetFileID=11007

His evidence to the Review Body runs to over 100 pages. However, it can be summarised in one sentence: Gove wants to remove every significant contractual workload protection we have in order to cut public spending.


Significantly, a large section of the evidence is about the economy: “The UK’s fiscal vulnerabilities argue strongly in favour of maintaining a credible path of deficit reduction. Despite significant progress since 2010, the UK is forecast to have the largest deficit in the EU in 2013/14. Among the G7, only the US and Japan are forecast to have larger deficits in 2013/14. Uncertainty in the global outlook reinforces the case for stability in the Government’s plans for fiscal consolidation. Clear and credible consolidation plans remain essential for reducing the risk of a costly loss of market confidence in the UK”.


In other words, the cuts aren’t working, so we’re going to keep on cutting.


It states clearly enough that the “Secretary of State’s objectives for the reform of teachers’ terms and conditions are:


In other words, budgets will be cut, jobs will be lost, and teachers are going to be bullied into working even harder and even longer.


Why should a ‘professional’ need contractual protection from excessive workload?! Apparently, “Detailed central prescription of what teachers and headteachers should do and how they should spend their working time limits the scope they have to demonstrate their professionalism” !


Of course, “detailed prescription can limit a school’s ability to make decisions about how teachers are deployed and so restrict its capacity to get the best value from its teaching staff and use their skills to achieve maximum impact for their pupils”.


In other words, remove all contractual protections – then we can make teachers work until they drop – then replace them with another victim to be worked until they can take no more as well.

Gove says, “There is evidence that the principle of PPA time for teachers has been welcomed, but that the current provisions are overly prescriptive in their approach, requiring schools to allocate it in half hourly blocks and on a weekly basis. This is unhelpfully restrictive for schools that are seeking to manage their teaching staff and plan their timetable as effectively and efficiently as possible. We believe the STRB should consider recommending the removal from the STPCD of the detailed specification of how PPA time should be allocated”.


In other words, there might no longer be any properly timetabled non-contact time, just the chance for a quick break between lessons, meetings and other duties if you’re lucky.

Gove says: “There is a strong case for a reform of the current working time provisions in the STPCD to give schools more scope to determine how they organise the school day and the school term in the best interests of children, parents and teachers”.


The words are clear: “We believe the STRB should consider removing the central specification of teachers’ working days and hours from the STPCD”.


But don’t worry, Gove is on our side really: “If the current overall limits on working time were removed from the STPCD, this would not mean that teachers and headteachers had no protection - the Working Time Directive would continue to apply” ... “which provide for an average weekly limit of 48 working hours and minimum rest periods of 20 minutes per six hours worked; 11 hours per day, and one [un]interrupted break of 24 hours every seven days."


This is an attack on education. How exactly could teachers be expected to prepare, plan, assess, provide high quality education (and perhaps even occasionally sleep!) with that kind of working week?

* Update: In practice, as the Working Time Regulations state that the 48-hour average has to be calculated over a 'reference period' of 17 weeks, which would include school holiday periods, even these limits could not be enforced during a working week in term time

Under the existing national STPCD conditions, “Teachers must be allowed one break of reasonable length ... between 12pm-2pm” and “No teacher may be required under their contract of employment to undertake midday supervision”.


Gove says: “Removal of [this] provision would enable headteachers to be more flexible in their timetabling” and “might make it easier for headteachers to cut costs by requiring teachers to undertake midday supervision".

Back to invigilating examinations – and sack the invigilators of course

“Teaching is out of step when compared to other high status professions in setting out in statute a list of tasks that it would be considered inappropriate for one of its members to perform ... In the context of exam invigilation, for example, the involvement of a teacher who is known to the children could be less stressful for them than engaging another member of staff who they don’t know”.

“We believe schools need to feel confident that they can legitimately ask teachers to provide cover for colleagues and that greater flexibility would be welcome. ... We recommend that the STRB considers the removal of “rarely cover” from the STPCD”.

Remember, your reward for all this impossible workload will be earning less for a worse pension too:

“The Government is therefore clear that any changes to public service pensions, including the progressive increase in contributions from 2012-13, do not justify upward pressure on pay”, plus, if a school ‘restructures’ your post and/or removes your allowances, “we would wish the STRB to consider the implications of reducing the period for which safeguarding is payable or removing the safeguarding provisions entirely”

Read it for yourself ...