Build Co-Ordinated Action in the Autumn - Lobby the TUC! 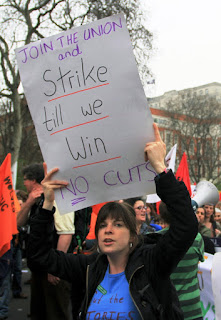 LOBBY THE TUC
SEPTEMBER 11 2011
Assemble 1:30 pm for Rally
in Friends' Meeting House, Euston
Speakers: Mark Serwotka, Bob Crow and other leading trade unionists
An excellent meeting last night,  hosted by the National Shop Stewards Network in London, brought together a platform of leading trade unionists in the capital from the CWU, FBU, RMT, PCS - and myself from the NUT - to discuss how we build for joint action in the Autumn.

Update: VIDEO of meeting on http://www.youtube.com/watch?v=i8qQ_PDq3Es

It had been another day dominated by news of further resignations and revelations exposing lies and corruption amongst the press, police and politicians. It may have taken our pensions action off the front-pages but it should give trade unionists confidence that, when we return to action, it leaves us facing a discredited and weakened Government.

Mark Palfrey (CWU), Ben Sprung (FBU) and Steve Hedley (RMT) all explained the particular attacks in their industries - over cuts, privatisation and pensions. Importantly, they all held out the definite prospect that their unions might be able to proceed to co-ordinate action with the NUT and other unions in October / November.

Chris Baugh from the PCS and I outlined the success of June 30 and  our unions' plans for further co-ordinated action in the Autumn. We both warned about the 'divide-and-rule' tactics from Government, intending to split united public-sector opposition into separate scheme-specific negotiations and deals.

Unfortunately, some unions seemed prepared to go down that route, running the risk that they would settle on a poor 'deal' that damages every other scheme's negotiations at the same time. For example, they might win a slight reduction in contribution increases (although perhaps at the expense of other schemes), but would accept the unacceptable increase of the retirement age to 68 and the change from RPI to CPI .

The TUC Conference - taking place in London in September - has to be put under maximum pressure to stop unions striking separate deals but, instead, uses its influence to call on all public sector unions to strike together in co-ordinated action - in short, for a 24-hour public sector general strike.

That's why I'll be calling on teachers and other trade unionists to build the Lobby of the TUC on 11 September, starting with a mass rally in Friends Meeting House, 173 Euston Road, NW1 at 1.30 pm.

Teachers, enjoy the summer break - and return ready for action !
Posted by Martin at 18:24