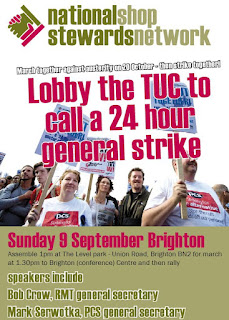 Await news from the NUT Executive on September 7

Lobby the TUC in Brighton on September 9

I hope most teachers have had a good break because we know that last year was tough, but this year could be even tougher - unless we stand up together for teachers and education!

On top of the continuing threat to cut our pensions and increase retirement ages to 68 or more, another barrage of attacks is coming our way. From this term, Michael Gove wants schools to adopt DfE model policies that could fast-track teachers onto formal capability procedures and would leave us open to unlimited classroom observations.

On top of a pay freeze and increased pension contributions, we also face ‘pay-cuts-by-performance’. Gove wants the Review Body to recommend that appraisal judgements are used to block our pay-rises - or even to pull us back down the pay scale!

On top of harsh classroom observation judgements, some schools will also seek to use the new ‘Teachers’ Standards’ to find fault with their staff and pile even more pressure on hard-working teachers.

As the scandal over the marking of the English GCSEs has shown so well, the standards that teachers and schools are judged against are also  open to political manipulation too.

We face a Government that seems intent on blocking opportunities for our students, trashing teachers, cutting our pay and pensions and widening school privatisation - just  as Gove announces that Academies won’t even have to employ qualified teachers any more!

I’m sorry that this a grim picture to paint so early in the term - but the important message to send to our colleagues is that “it doesn’t have to be this way!”

The NUT and NASUWT, making up over 80% of teachers, are working together on a joint programme of action to oppose these attacks. If this unity is used correctly to escalate action - and not to hold it back - then this can be a powerful force that can be used to successfully defend teachers and education.

Joint NUT/NASUWT checklists have just been issued covering appraisal and classroom observation policies. (Copies can be found on the national NUT website via http://www.teachers.org.uk/appraisal).

With some managers already getting ready to bombard staff at upcoming INSET days with more targets and demands, it’s worth noting that the joint advice stresses that the new Teachers’ Standards must “not be used as a checklist against which teacher performance is assessed”.

On Friday September 7th, the NUT Executive will be meeting to hear the final result of our national action ballot. If, as I hope, the Executive votes to give the go-ahead for both national ‘strike’ and ‘non-strike’ action, then NUT school groups need to be ready to respond as soon as possible. Local NUT divisions and school groups urgently need to be fixing dates for meetings to bring staff together to discuss how to implement action in their school and Association.

‘Non-Strike’ action raises lots of possibilities - but will raise just as many questions as to how it will work in practice. It is vital that school reps raise their views with their Division Secretaries and Executive members and report on issues in their school. Different school managements, both across Local Authority schools and in Academies, may take very different approaches to adopting any new appraisal, capability and/or observation policies.

The latest letter to NUT representatives from Christine Blower, NUT General Secretary,  states that: "The NUT is currently in dispute with the Secretary of State and, in Wales, the Minister for Education. In part this dispute is about the failure to negotiate a satisfactory system of appraisal and observation with sufficient protections. NUT members are currently being balloted for national industrial action in relation to this dispute. If the ballot is successful and action goes ahead, then members will be supported in refusing to cooperate with all aspects of a schools appraisal policy if it does not meet the terms of the joint NUT/NASUWT checklist and observation protocol. Where schools continue to refuse to adopt the provisions of the joint checklist and observation protocol the NUT and NASUWT will issue, in accordance with the required legislative procedures, a notice to the employer, to take further action"

But unifying national strike action is also needed - and pressure will need to be applied to make sure it happens. While unions like UNISON may have voted to settle on the Local Government Pension Scheme, other unions like the FBU firefighters and POA prison officers have voted to reject the Government’s proposals (see: http://www.shopstewards.net/news.htm)

That's why it's vital that the TUC Congress meeting in Brighton next week, agrees to support co-ordinated action against attacks on pay and pensions, as well as building for a mass turnout at the October 20th demonstration in London. October 20th can’t just be about letting off steam - it needs to be a springboard to determined united action. That should include building for a 24-hour General Strike right across the private and public sectors that can pile the presure back on this hated Government - instead of them piling pressure on us!

If you agree, then join NUT members and other trade unionists at 1 pm on Sunday 9 September at the Lobby of the TUC being called by the National Shop Stewards Network. Bob Crow (RMT), Mark Serwotka (PCS) and Steve Gillan (POA) will be just some of the speakers.

Transport is available from across the country with train tickets being available for just £5 return from London to Brighton (see details of transport arrangements on http://www.shopstewards.net/TUC.lobby.htm.

So make the most of any summer holiday you've got left - and then let's get ready for action!