Strike to stop performance-pay - and help stop privatisation too


This morning's news of a 'secret memo' revealing the "full extent of Michael Gove's plans to revolutionise education" will come as no real surprise to teacher trade unionists.  However, this timely reminder that Gove's real agenda is for full privatisation of academies, allowing big business to make profits out of school budgets, is a key message that also needs to be publicised as part of our campaign against performance-pay.

As we have said from the very start, Gove's performance-pay plans are about cutting costs to help his privatising friends. If big business wants to make a profit out of schools, it needs to cut the main budget heading - the salary bill.

So Gove's performance-pay proposals are another step along the route towards school privatisation - with the added bonus that he hopes PRP will divide the workforce and undermine collective trade union action too.

The NUT needs to make clear to parents how the PRP campaign and anti-academy campaigns are so closely linked. A strike against PRP is also a strike to help stop privatisation - both part of a battle to defend education.

The Mid-Staffs hospital scandal is also a stark reminder of what can happen to public services when they are dominated by targets. That same culture is already gripping education - and PRP will make it even worse.

But time is running short to stop Gove's pay proposals becoming implemented.  Agreement across London Region NUT for a demonstration against Gove on Wednesday March 13 is a good way of mobilising for national strike action - but when will that national action be called? 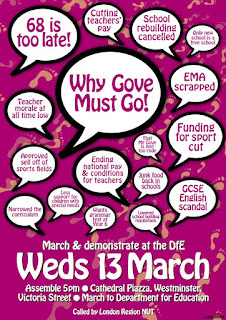 March 13 could, and should, have been the first day for a national strike - but that was narrowly rejected at the last meeting of the NUT Executive.

Rather than retreat again, the next National Executive meeting on February 28th needs to correct its mistake and call a first day of national strike on Wednesday March 20. That should be followed by further national action early next term. Calling a two-day strike on April 30 and May 1st - May Day - would show teachers and Gove that we are serious about stopping these disastrous PRP plans.

That's why Warwickshire NUT and Liverpool NUT have added their names to the list of London Associations who are not only building for the March 13 demonstration but who are also building for a Lobby of the NUT Executive on February 27th as well. 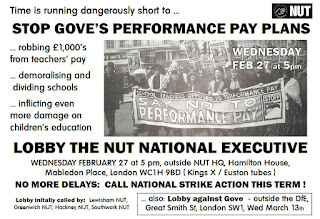 Those Lobbyists will be trying to get the message across to National Executive members that we need to announce our plan of national strike action as soon as possible - and starting this term - so that teachers can start to budget ahead for loss of pay and so that Local NUT Associations can spread publicity and build hardship funds and so schools can alert parents and students, especially those preparing for exams.

We're battling for the future of education - we can't afford to hesitate any longer!

News of Gove's academy plan can be read via this link:
http://www.independent.co.uk/news/education/education-news/secret-memo-shows-michael-goves-plan-for-privatisation-of-academies-8488552.html

... and in further bad news for Gove, with evidence that the bullying culture that is gripping education starts at the very top, a Guardian article alleges that Gove may have misled Parliament over a bullying complaint at the Department of Education:
http://www.guardian.co.uk/politics/2013/feb/09/michael-gove-bullying-claims-payout1
Posted by Martin at 11:41