Defend pay and conditions, stand up for education, strike and rally on 5 July!

A message to teachers:

Over the last few weeks, thousands of NUT members have been voting in our national ballot to defend school funding and teachers’ terms and conditions.

The result of that ballot has now been declared: an overwhelming 91.7% majority of the votes returned were in support of taking strike action. In response, the NUT’s National Executive has therefore backed a first day of strike action on Tuesday 5 July.

The Government’s proposed cuts to school funding – especially here in London – threaten job losses, even greater workload and teachers losing out on pay progression. They also threaten the educational opportunities of the children you teach.

That’s why I am calling on members to support the Union’s strike call so that, together, we can make a stand to demand:
* increased funding to schools and education,
* guaranteed terms and conditions in all types of schools,
* resumed negotiations on teacher contracts to allow workload to be addressed.

Please also help us make the biggest impact we can on the day by joining teaching colleagues, governors and parents on our March and Rally for Education on 5 July:
11 am - assemble in Portland Place, London W1A 1AA (outside the BBC)
12 noon - march to Westminster through central London
1:30pm - rally in Parliament Square


Do you want to know more? - listen to Kevin Courtney:

A message to parents: 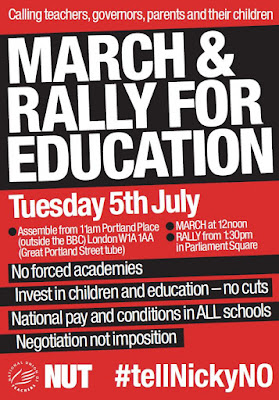 With so many teachers being driven out of the profession by excessive workload - exacerbated in the capital by the cost of housing - schools already face a recruitment crisis.

To make things worse, schools now also face significant spending cuts. In London, budgets could be cut by as much as 20% over the next few years. That would have to mean staffing cuts, bigger class sizes and less support for children - as well as cuts to teachers' pay, terms and conditions.

The Government has, predictably, already accused the NUT of 'playing politics'. No, we regret the disruption that our action will inevitably cause to parents on the day, but it is the politics of this Government that are causing the permanent damage through worsening morale, rising teacher shortages, budget cuts and forced academisation. We hope our action can help persuade the Government to think again.

I would appeal to parents to join us in our March for Education on July 5th so that, together, we can Stand Up For Education.


Do you want to know more? - listen to my interview on BBC Radio London tonight:

Email ThisBlogThis!Share to TwitterShare to FacebookShare to Pinterest
Labels: July 5