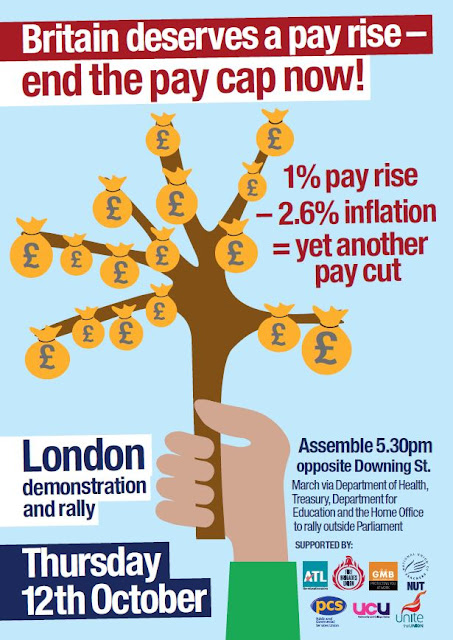 Today's report from the School Teachers' Review Body has done nothing to 'break the 1% pay cap' as some initial reports have stated. No, only new teachers on the very bottom of the main pay range will get a 2% increase (and even that is still less than inflation - so still a cut in real terms). For everyone else, it's a performance-related award.


If you are no longer on the main pay range, it's definitely 1% only. But, even for most main pay range teachers, there's no guarantee of a 2% increase - the STRB want that to depend on your 'performance' and the state of your school's budget.

Even though the maximum of the range (M6 in most schools) will be increased by 2%, it doesn't mean that eligible teachers will automatically receive it. The STRB have already trialled in a previous report the divisive idea that only some M6 teachers get the full award - others might get a lower increase, depending on their appraisal. Today's report is a further twist of the damaging performance-pay knife and another attempt to atomise national pay scales through school-by-school decisions.

The STRB say they are worried about teacher morale*, recruitment and retention. But how much more divisive and demoralising could they have been than to recommend this?!

The key paragraphs from the Report are quoted below but, in summary, the STRB are saying effectively that there's not enough in school budgets to give everyone 2%, even on the main scale, so schools should pick and choose who 'deserves' it most:

5.26 "Our remit requires us to consider the affordability of our recommendations. The Secretary of State emphasised to us that there will be no additional funding for schools to implement a pay award. We recognise that implementing a pay uplift of more than 1% within their current funding allocations may require some school leaders and governing bodies to take difficult decisions"

5.27 "As we have stated in previous reports, uplifts to the minima and maxima of the various ranges in the national pay framework do not automatically translate into the same level of uplift to all individual teachers’ salaries in payment. Pay decisions for teachers (including those currently paid at the maximum of their pay range) should be made locally in line with the school’s pay policy and related to an annual appraisal of performance, subject to all being paid between the minimum and maximum of their pay range. This allows school leaders and governing bodies to set pay policies that enable them to make differentiated pay awards, when justified by performance or local circumstances, and which allow them to make best use of their budgets".


NUT Divisions in London, with the support of other trade unions, have already announced a response:

NOTES:
* Even the STRB state that NEOST, representing the employers, commented to them (para 2.50) that "schools would prefer to avoid making differential performance-based awards to avoid any negative impact on morale as they believe that this would outweigh any positive impact on individuals". It seems that the STRB has even ignored the employers' evidence.
* For an update on Justine Greening's false promises over funding, see this article
Posted by Martin at 23:44