"To support an effective career pathway for school leaders, the level of pay on offer must be sufficient that people stepping up to such leadership positions feel that they are being fairly remunerated for the additional responsibilities and pressures they are taking on", (para 4.17, STRB Report, July 2018)

1. The Government have refused to accept the STRB recommendations in full 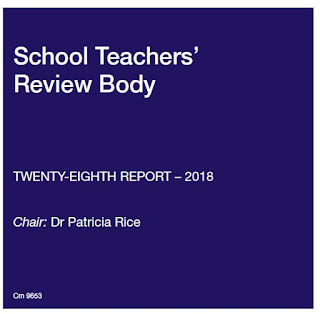 But 60% of teachers are paid on higher scales. Damian Hinds is recommending they receive less than the 3.5% uplift recommended by the STRB – and less than the current rates of inflation (CPIH 2.3%, RPI 3.4%). Instead, Damian Hinds announced that “the minima and maxima of the upper pay range will be uplifted by 2% and on the leadership pay range by 1.5%”.

Warning: As teachers in East Sussex have recently had to strike to expose, last year’s 2% uplift was only statutorily applicable to the minimum and maximum points of the range. Some academies are not bound by the STPCD in any case. Even some maintained schools didn’t pay 2% to teachers on the intermediate points M2-M5. Could this happen again with the 3.5% uplift?

2. The Pay Award will NOT be fully-funded by the DfE – and certainly not by the Treasury

Damian Hinds’ statement went on to say: “We will be supporting schools in England to implement the award with an investment of £508 million through a new teachers’ pay grant of £187 million in 2018-19 and £321 million in 2019-20 from the existing Department for Education budget. This will cover, in full, the difference between this award and the cost of the 1% award that schools would have anticipated under the previous public sector pay cap”.

Warning: Even if the pay grant announced is really sufficient to pay for the DfE recommendations, already overstretched school budgets will have to fund the costs of the 1% portion of the award.  But there might be more to pay. The Treasury has made clear it is not paying the DfE bill for the additional £508m but this will have to be found from elsewhere within DfE resources. That could mean schools then having to pay for vital services that are cut from other parts of the education budget which schools rely upon.

3. The STRB wanted 3.5% across the board for a good reason – for teacher retention

This is what the STRB had to say about ‘Career progression and school leadership’: “In addition to ensuring that a sufficient number of good teachers can be recruited and retained in the profession, the teachers’ pay structure must also provide the right incentives for suitable teachers to progress to middle and senior leadership roles”.

“On our school visits, few of the classroom teachers we speak to aspire to become senior leaders, and few of the deputy or assistant heads we speak to wish to become head teachers. Many are put off by the responsibility and accountability that comes with such roles. To support an effective career pathway for school leaders, the level of pay on offer must be sufficient that people stepping up to such leadership positions feel that they are being fairly remunerated for the additional responsibilities and pressures they are taking on. We see evidence of emerging problems in recruiting and retaining school leaders, which indicates that this may not be the case”.

4. The STRB Report contains clear evidence as to why teachers’ pay needs a substantial increase

Here are just some of the charts within the Report that speak for themselves: 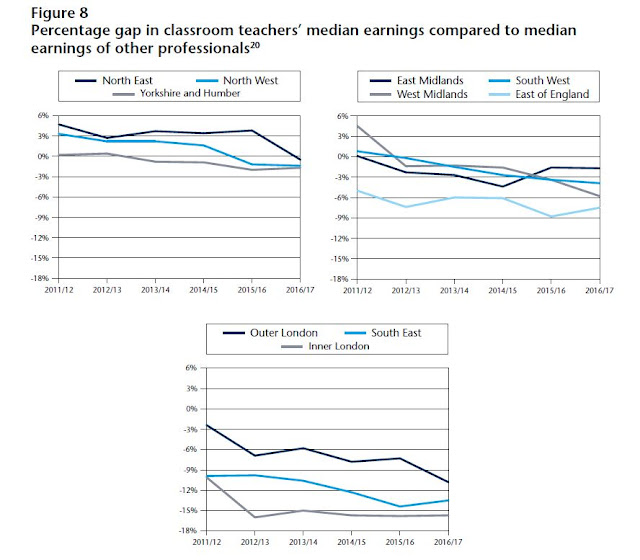 Figure 8 shows that the relative position of classroom teachers’ median earnings has continued to deteriorate. “All regions have seen a worsening position over the period from 2011/12 to 2016/17. In the last year, large drops were seen in the North East, West Midlands and Outer London. For the first time classroom teachers in the North East had median earnings below that for other professional occupations”. (That now means that in every region, median earnings are beneath those for other professional occupations). 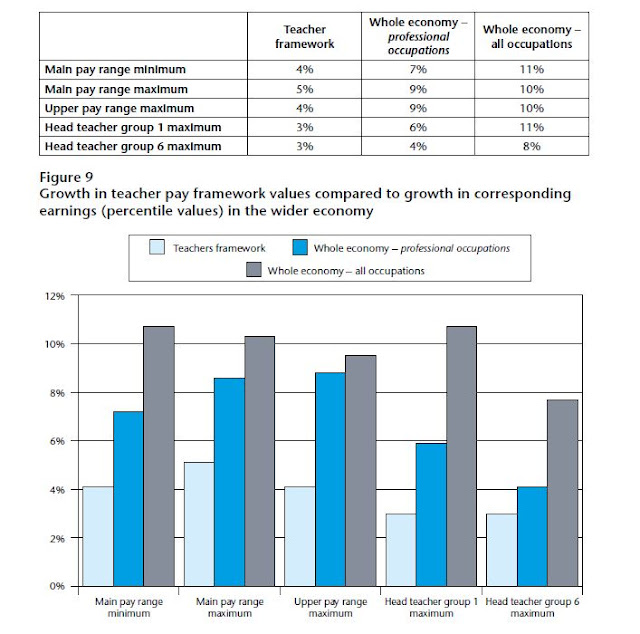 Given the Government’s decision to only recommend a lower increase on the Upper Pay Range, it’s worth noting that the biggest gap in the growth in pay between teachers and other professionals is at the Upper range! 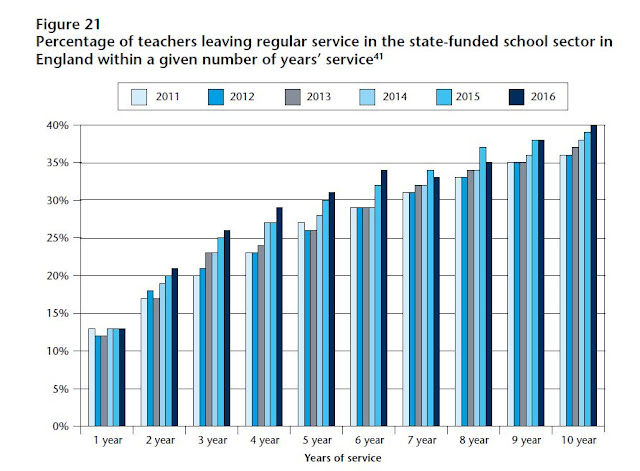 Figure 21 shows how that deteriorating pay contributes to an ever increasing ‘wastage rate’ – just at a time when pupil numbers, and so demand for teachers, is increasing. “Between 2011 and 2016, the percentage of teachers leaving within three years’ service increased from 20% to 26%, while the percentage leaving within their first five years increased from 27% to 31% over the same period”.

5. You will now earn more as a M6 teacher in Inner London than a U1 teacher in Outer London

If that 3.5% had been also applied to a U1 teacher in a neighbouring Outer London Pay area borough, the difference would have been slim – but at least they would still have earned more (£40,903).

Given the hoops that too many teachers have to go through to 'cross the threshold', many Outer London teachers will wonder whether it's worth the hassle and will look to move to an Inner London paying school instead. Even more Outer London schools will be struggling to retain their experienced staff.
Posted by Martin at 22:27