Education under a Labour Government 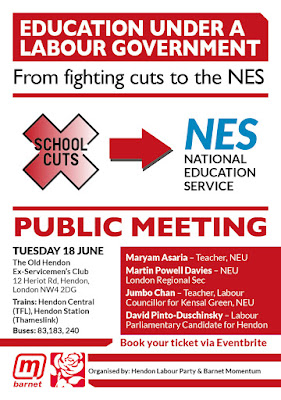 "Education has always been a key question for the labour movement – and rightly so.

If you go back to the pioneers of our movement, to the self-educated Chartists and the founders of mass trade unionism, to the first victorious Labour candidates fighting for seats on the London School Board, to Marx and other socialist theoreticians, then the struggle to win genuine education for the working class has always been a key part of the wider struggle for a better future, for a socialist future.

After all, the struggle for better pay and conditions, for better housing and health, are not ends in themselves – but to provide the environment in which the human personality can genuinely flourish, where the skills and talents of all individuals can be developed to their maximum for the benefit of society as a whole – to coin a phrase, for the many, not the few.

The National Education Union, formed from the merger of the ATL and NUT unions, although not affiliated to any political party, is proud to say we stand in those traditions of struggling for a better future and for a high quality, comprehensive education system for all.
As a union of over 450,000 members, we have the potential strength to influence the debates needed around education and to organise to make the changes necessary. In London, our density is greatest of all – with 75,000 members, largely teachers but also support staff.

Barnet – with over 3300 in-service members, is our largest London District of all – although that brings both its complications and its strengths.

The NEU welcomes Labour’s commitment to develop a National Education Service which, alongside policies needed to eradicate poverty and inequality, has the potential to transform education and the lives of children and young people.

However, we have to recognise that those policies will only be won, and implemented, through a struggle against those who do not share our common values, who stand not for equality, but for inequality and austerity.

That means understanding how the consensus in favour of a well-funded comprehensive education in the interests of a society as a whole was broken at the end of the post-war boom, From a time when even Margaret Thatcher could preside over more grammar schools becoming comprehensive than under any other Education Secretary, capitalism entered stormier times where education for all was a luxury it no longer saw fit to afford.

The gains of comprehensivation – while far from perfectly implemented – were wrecked by the imposition of neo-liberal education policies implemented in Britain – and internationally – with the aim of cutting costs by making schools compete in an education marketplace, while opening up education as another source of income for private companies and Academy Trusts.

The politicians first created that marketplace by making sure all schools could be compared like supermarket goods – through a prescribed National Curriculum and standardised tests to compare school – and teacher – performance. Then, instead of blaming Governments for failing to address poverty, for failing to fund education, the blame could be placed on individual schools, Heads and staff – and their trade unions - for failing to perform as well as their competitors. Just to make sure, Ofsted was created to label the failures and make sure they were turned over into the hands of the Academy Trusts.

For a while, that ideological attack – where, I am afraid, there was a new consensus that included Conservative and New Labour politicians succeeded. Education spending has been cut, locally accountable community schooling has been dismantled in many areas, SATs and Ofsted have forced up stress and workload on staff and students alike.

It’s not just the NEU that understands the reality of education cuts. Just today, the Institute for Fiscal Studies has produced an analysis of Conservative leadership contenders’ claims about providing extra spending for schools (although the fact that the Tories have to talk about it shows the pressure they are under). They confirm that existing government plans for departmental spending forecast further cuts – not increased education expenditure.

Buildings maintenance, staff training and learning resources have been cut across the sector. That’s bad enough - but the large majority of a school budget is spent on staff. So school cuts have meant cutting TAs, not replacing teachers as they leave, meaning larger class sizes, needs left unmet, even higher workload for those staff left. The Government’s own workforce statistics show that, while England’s schools have had 137,000 more pupils, schools have had 5,400 fewer teachers to support them - and similar reductions in support staff numbers too.

But now parents and voters are seeing through the spin and realising what is at stake.

The same goes for high stakes testing like the SATs tests at 7 and 11 and the baseline, phonics and multiplication tests used to compare schools.

More and more staff and parents are beginning to realise that these tests are nothing to do with improving education – they are in fact unreliable and unnecessary – giving parents little of the real information they want and need about their child’s progress. Of course teachers and schools have always relied on assessment to inform their work – and to inform, children, their parents and carers – but imposed high-stakes testing is to label children, not help them.

Their purpose lies in the marketisation of education, putting pressure on staff to teach to the test, narrowing the curriculum and, in turn, putting pressure on young children, all because of the threat of failure – personal failure leading to capability threats and rejected pay progression – and institutional failure through Ofsted grading and their position in league tables.

Again, the tide is turning – and the fact that Jeremy Corbyn announced to NEU Conference in April that an incoming Labour Government would scrap SATs is welcome testament to that change.

But, as with cuts, an appeal to reason won’t change the mind of a Tory Government – why would they be electing any of their leadership candidates if good sense was anything to do with it!

That’s why the NEU are presently conducting an indicative ballot of all our primary members asking members whether they would be prepared to take action to boycott high-stakes testing next year.

The ballot ends on July 2nd – and any help you can give in supporting Barnet NEU in contacting its primary members would perhaps be one of the most urgent and concrete steps that could come out of this meeting tonight.

In conclusion, decades of market-driven education policy – and the twin attacks of spending cuts and high-stakes testing, have damaged the well-being and life chances of too many young people. We need to stop those attacks – and win a Government that will look after the interests of the billions, not the billionaires – and not least, the interests of our young people by constructing the education of the future".
Posted by Martin at 17:18