UK schools to close - what needs to be done now

The Government have had to bow to the inevitable and announce the closure of all schools from Friday until further notice, except for children of key workers and the ‘most vulnerable’.


Making the announcement, Boris Johnson unconvincingly attempted to make this decision sound as if it was all part of a clear plan. In reality, it has been another rushed decision that he has had to take under growing pressure from the National Education Union (NEU) and Headteachers who really understood the impossible position facing schools as the virus spreads in our communities.

Growing numbers of schools were already having to announce closure and that they were moving to online learning where they could. This was because of falling staffing levels as staff followed advice to self-isolate. As the Head of one of the first schools to close, Stretford High in Manchester, explained in her letter to parents on Monday, “the impact on staffing means it is not operationally possible to run the school safely … Staff members who have symptoms are not being tested … . I do not know if one, none or all have the virus … The government make the point that the virus does not seriously affect children and young people. However, this does not mean that they won’t become carriers. They then risk taking the virus home to their families. Families with pregnant mothers, families with elderly relatives, family whose members might be poorly”.

Of course, school workers worry about the impact that closure could have on the vulnerable, on families of essential workers, pupils with exams and those on free school meals. That’s why the NEU, while calling for closure, also called on the Government to use schools as community hubs to help lead on this community support.

Johnson has had to take notice. He has announced that this summer’s exams will not take place. Year 11 and 13 students will be worrying about what that means for them. The government should agree that teacher assessments should be used instead. The pointless primary school SATS should just be scrapped. The government must instruct broadband providers to provide it free so that children can access the online resources that schools have been compiling.*

The Government has also promised that arrangements will be made to provide free school meals through schools or by the provision of vouchers. Schools have also been asked to remain partially open to provide childcare support for key workers and the most vulnerable children.

But, once again, Johnson has provided no clear plan. Which staff are expected to report to work? Who decides which children and families will be supported and which are not? How will special schools or others with particularly high levels of needs be safely staffed ?

School leaders and school union reps, in consultation with local authority services and parents, need to urgently meet together to plan out what can be safely provided, and how much additional support they will need in terms of staffing and resources. Trade unions must have oversight in drawing up the plans in every school.

Many staff will be willing to volunteer to be in the workplace but others with health needs, vulnerable relatives or their own childcare difficulties, will not be able to. The decision on whether to be in the workplace or working from home must be voluntary, not enforced. Either way, all staff should continue to work on full pay, especially those on agency contracts who otherwise stand to lose substantially when schools close.

Local Authorities should establish their own centrally-employed supply pools providing staff who can be directed to schools where there are staffing shortages.

Staff need to be able to work safely, with sufficient cleaning and all other necessary safety measures being put in place.

Budget pressures must not be a barrier to doing what needs to be done. The Government needs to be held to its promise to ‘do whatever it takes’ and guarantee all additional costs will be met in full. They also urgently need to deliver on their promise to provide coronavirus testing for NHS, carers and school staff so that public service workers are no longer working in the dark as to whether they are passing on infection to service users or not.

These critical decisions cannot be left to a Government that has shown itself to be incompetent in the face of crisis. It will have to be for schools, school unions and their staff to work out what now needs to be done and to take the necessary urgent action.

*Broadband demand added after initial posting  - thanks to colleagues for suggesting this important addition. 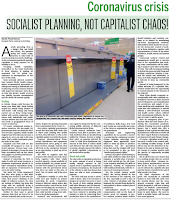