For the last few weeks, NEU Branch Officers and school reps have been working hard to encourage teacher members to respond to an online survey about pay. In the end around 70,000 members, a little under 30% of those who had been polled, responded to the texts and emails sent to them nationally.

This was a very good initial turnout, particularly given that a turn towards campaigning on pay had only recently been made by the Union. A 0% ‘pay freeze’ had been imposed on teachers paid under the School Teachers Pay and Conditions Document for the previous 2021 pay award without the Union responding in the way that is now being done. Despite the short lead-in to the survey, 74% of those voting were already saying they would support strike action over pay.

Two NEU branches, East Riding and Redbridge, even managed to exceed the 50% turnout that would eventually be needed in a formal strike ballot under the anti-trade union legislation, showing how other branches could also improve their turnout with the right approach, support and organisation.

The Executive agrees we will need to ballot – but when?

On Thursday, 10th February, a special meeting of the NEU Executive met to discuss the overall response and to plan the next steps in the pay campaign. Important steps were agreed but, in my view, a key step was missing, and that was to agree a clear timescale for proceeding to a ballot for strike action.

A timescale for a ballot is not just a small detail, it is a key part to any pay campaign. Of course, NEU reps and officers can, and will, encourage members to take part in the demonstrations, rallies and other activities that were agreed by everyone on the Executive. However, in all those activities, it will be important to explain to members that we will need to vote for, and firmly enact, strike action if we are really to influence this Government and warn off its big business backers calling for Ministers to maintain ‘wage restraint’.

A timescale provides a sense of urgency and an assurance to members that it’s important for them to attend the demos and rallies, because they are part of a serious campaign to win our pay demands - of an 8% pay rise over both of the next two years across all points on the pay scales. It also gives a clear idea to busy branch officers, reps and staff as to what priority needs to be given to updating addresses, holding meetings and other preparations.

When I heard that the Executive had not agreed any timescale, and posted criticism on my personal Facebook page last week, I received angry responses from members of the majority ‘NEU Left’ group on the Executive including accusations that I was ‘misrepresenting’ what was agreed.

This has since been followed by an article on the NEU left blog that criticises “some in the union who don’t support [the agreed] strategy, calling instead for an immediate indicative ballot. Some of those people have said that the Executive have ruled out strike action. Nothing could be further from the truth. We question the motivation behind this spreading of misinformation”.

Now that’s quite a serious accusation and, although nobody is specifically named, presumably aimed in part at me. So let me explain further as to why, no, I am not spreading misinformation [on the contrary, as I explain below, no Executive amendment actually called for an “immediate indicative ballot”] but, yes, I am raising questions and concerns. I do so not light-mindedly, but because, at a time when prices are rising so rapidly, alongside pay cuts through national insurance increases, a failure to win on pay would be so serious for so many members.

What was agreed by the Executive – and was voted down

What was agreed by the Executive was a commitment “to put every effort nationally, regionally and locally to put ourselves in a position to call and win a national ballot at the earliest possible opportunity”.

But the Executive still needs to clarify what timescale they are looking at and how that relates to the timetable for the Government and the Review Body to make decisions over teachers’ pay.

As has now become their standard practice, the Government are likely to announce the next pay award in late July. But, this time, they are going to impose a two-year pay award for 2022/3 and 2023/4. Therefore, our strategy needs to have maximum impact before July. 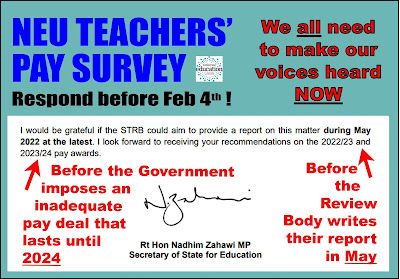 Recognising this, a ballot timetable crafted to allow strike action to take place in July was put to the February Executive. It proposed that the next half-term, up until Easter, should be used to share best practice amongst reps and branches and identifying areas in need of further support.

Meetings, rallies and demonstrations, such as the one now called by the TUC on 19 March, could be used to increase confidence and engagement, building on members' concrete experience of rising bills and falling incomes.

All these steps would be preparation for launching an indicative ballot from April’s Annual Conference. The indicative ballot would then have been followed by an emergency National Executive meeting on 14 May, hopefully agreeing it was in a position to move to the formal ballot needed to sanction strike action before the end of term.

However, this proposal was only supported by a minority of Executive members. This decision effectively rules out any chance of building for national strike action by July. This, I believe, is a missed opportunity and presents a complication. The Union will now have to take action to persuade the Government to reverse its decision, rather than before it is made.

A clear announcement needed by the Union

I appreciate that the NEU Left majority on the Executive believe the Union would not be ready to win the necessary turnout and majority by July. But when do they think “the earliest possible opportunity” will be? What timescale is the Union working towards?

The NEU left blog concludes that the agreed strategy “will include moving to an indicative ballot – whether in the autumn term or sooner if we judge the mood is strong enough and we can win it”. Leading NEU Left member Alex Kenny has written to officers in London stating that “the fact that we may be looking at a two year pay award gives us a longer timeframe over which we can map this campaign”. But will a full ballot be launched early enough to give members confidence that an inadequate two-year pay deal can be reversed, and not become seen as a fait accompli?

Postponing a national ballot doesn’t guarantee generating greater momentum, delay can also see it being lost. By constantly telling activists that a majority can’t be won, and postponing action to some undefined future date, there is a danger that some in the Union conclude that national action can never be taken. Our strategy then becomes only one of building workplace-by-workplace, following the Union’s long-term ‘VEVE orientation’, but never brings members together in united action.

This would be a one-sided strategy that risks demoralising activists and failing members. Of course, we need to build workplace strength and rep density and organisation but the key drivers of pay, workload and funding cannot be tackled at a workplace level alone, they require national action. A serious campaign for a national ballot can help build at workplace level and vice versa.

After responding in such high numbers to the initial survey, NEU members now need a clear message about how the Union intends to, not just protest, but win on pay, reversing any two-year pay cuts imposed on teachers in July. It also needs to make clear to support staff members how we are planning to organise around their pay award as well.

Now that a timetable seeking to take national action before the pay award is announced has been rejected, is it not now time to make clear to members, and the Government, that the NEU will however ballot for action in the autumn term if our pay demands are not met? Such an announcement would give the whole union a timescale to build around.