FAQs - why NEU members should vote for action

With the preliminary ballots for NEU Support Staff members, and in Sixth Form Colleges already open, the NEU's electronic vote for teachers in state schools opened this weekend. Already tens of thousands have voted. Now we all need to drive that vote up until we smash through the 50% threshold that will be needed in the further, fully postal ballot required to call a strike under the Tories' anti-union legislation. 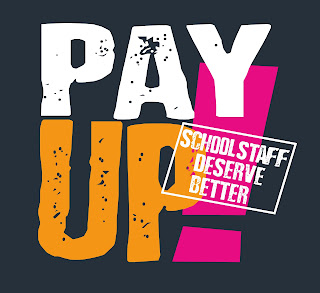 Many members understand straight away why they need to vote for action but some may have a few queries before they do. Here's answers to four of the questions that I have come across in speaking to members in my District:

WILL STRIKING MAKE ME LOOK BAD WITH MY HEAD AND PARENTS?

No. There's no reason to feel awkward about taking strike action. It's your legal right to do so, as long as we win the ballot with a high enough turnout. Our action would be a national strike to campaign to win a fully-funded pay rise. It's not directed against your Head or your school, in fact it would help your school by making sure they had improved funding and fewer problems with retaining and recruiting staff.

Of course, parents will be inconvenienced by a strike but, as railworkers and postal workers have found when they have taken strike action over the summer, with everyone's cost of living rising, there's a widespread understanding that trade unions have no choice but to take action. We will also produce information for parents and governors so that they can read the facts about our campaign.

CAN WE AFFORD TO STRIKE?

With the cost of energy, transport, food and housing rising steeply, and inflation forecast to rise even further by 2023, can we afford not to? If we don't take action - especially when other unions are - that will only encourage this government to think they can keep cutting school budgets, holding down our pay, and piling on yet more scrutiny and workload.

Strike action has already won victories for trade unions in a number of local disputes. Even the threat of action has just won an improved pay offer for Scottish council workers - including school support staff - and over £400 million in extra funding to pay for it too.

HOW CAN SCHOOLS AFFORD TO PAY MORE?

The government's 'mini-budget' has shown it has money to spend - but it will need action to persuade them to direct some of it into education, instead of towards tax cuts for the wealthy.

It's not a question of ‘either’ pay ‘or’ school funding - our campaign is to win both. So, don’t be put off voting for a pay rise because you fear school budgets won't be able to cope. The battles for better pay and for better school funding are two sides of the same coin. Strike action is the most powerful way of winning both.

Yes. With support staff unions consulting over pay, and the NASUWT teaching union also talking about action, NEU members can vote for action with confidence that our action could be taken across school staff, and alongside other unions in the public and private sectors too.

We won't be alone. With inflation rising, the government is under growing pressure to act. Our action can make it think again on pay.

So, keep talking to your colleagues and make sure everyone has voted - and voted YES to action. EiS members in Scotland have just secured a 78% turnout, with 91% voting in favour of strike action - can we do the same?

You can download a Socialist Party in Education bulletin containing some of the key information about the ballots here. 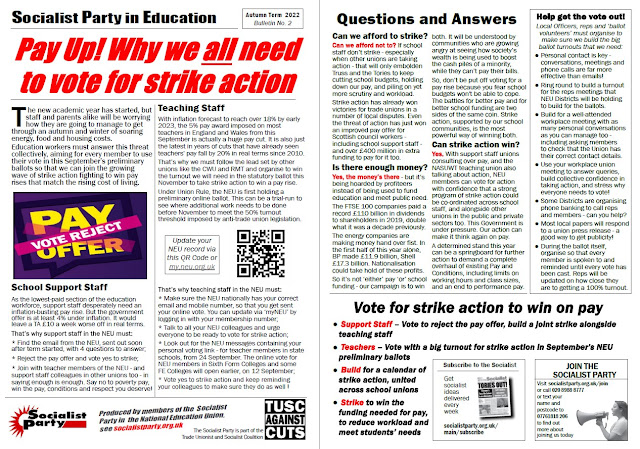