A week on from the riots, 'Youth Fight for Jobs' organised an excellent meeting in Tottenham last night to discuss the way forward for the community and local youth. The meeting was introduced by Steve Hedley from the RMT and Vik Chechi from Youth Fight for Jobs (YF4J) but, refreshingly, most time was left for those in the audience to give their own opinions. 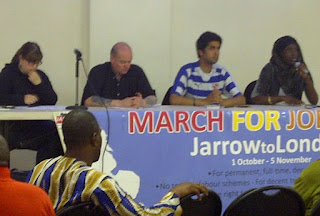 Contributions from a wide range of ages and backgrounds all reached a similar conclusion - that youth had every reason to be angry but that rioting helped nobody. However, unlike the hypocritical condemnation being spouted by the press and politicians, everyone who spoke wanted to seriously reflect on why the riots had broken out and, crucially, suggest ways to help the youth and community productively organise action over the many grievances facing working people across all of London's communities.

Before the meeting, YF4J had held a protest against the closure of youth services by Haringey's Labour Council. Plans were outlined to organise further demonstrations to oppose council cuts in the future.

David Lammy, Tottenham's Labour MP, came in for strong criticism for his failure to explain the real grievances facing local people and for not speaking out against the cuts and the stop-and-search harassment suffered by local youth. Calls for community campaigns and trade unions to stand their own anti-cuts candidates in the London Assembly elections were applauded.

The vindictive sentences being handed out on rioters were contrasted with the 'looting' of our services and taxes by the wealthy - with Osborne now suggesting he will even abolish the 50p tax rate for the wealthy.

A local youth, Young Deacon, performed "Failed by the System" that has so much more to say about the riots than the demonisation of black youth being spouted by many of the tabloids. Have a look on: http://www.opendemocracy.net/ourkingdom/ourkingdom/young-deacon-failed-by-system

Zoe, a young teacher, spoke at her anger about the way that youth were being scapegoated in the media and for the way many pupils were labelled as 'failures' at an early age. Others pointed out that the killing of Mark Duggan by the police, the incident that had sparked the riots in the first place, must not be forgotten. Youth Fight for Jobs have been calling for an independent trade-union and community led enquiry into his death.

Trade unionists also spoke about the need for unions to show a way forward by taking strike action against cuts and austerity - especially by continuing and extending the action against pensions in the autumn. Many present said they would be be attending the NSSN Rally and Lobby on September 11th to call on the TUC to organise co-ordinated strike action across the public sector. Nina Franklin, NUT President, will be speaking as well as Bob Crow from the RMT and Mark Serwotka from the PCS.

When teachers return to school in September, both teachers and school students will undoubtedly be discussing the shocking events of August. We certainly don't need lectures from the press, politicians and the powerful to follow their high moral standards!

Teachers, as ever, will be trying to offer genuine support and help to young people so that they can make the most of the opportunities open to them and not follow the dead-end of rioting. However, teachers and students alike will be increasingly asking what opportunities are really available to embrace the many talents of our youngsters? It's not enough for Ministers to condemn 'criminality', it is their responsibility to provide decent jobs, training and education for our school leavers.
Posted by Martin at 09:27