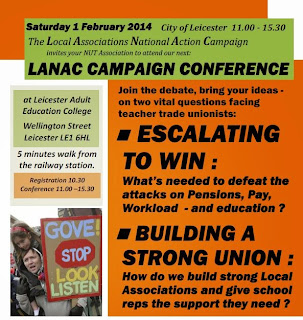 If we are going to successfully stop the attacks on our pay, pensions and conditions, then the start of 2014 is going to be a vital time for teaching unions to organise a firm response to Gove’s attacks. On top of the attacks we already know about, the STRB is soon to report on plans to deregulate conditions too.

After June and October’s well-supported regional actions, national strike action planned for November was postponed, supposedly because we had won ‘meaningful talks’ from Michael Gove. In reality, those talks were only ever meant to be about “implementation of Government policy” and so none of us will be surprised that no progress has been reported from December meetings.

The latest NUT circular informs us that reports of any further developments, both from talks, and on the prospect of joint national strike action, will follow in January. The NUT and NASUWT had agreed that their plan was that, if there were no significant progress before the end of 2013, then there should be a day of national strike action before 13 February 2014. However, no firm date has yet been announced and a special meeting of the NUT National Executive has been set for 16 January to decide on what the NUT needs to do. LANAC argues that the decisions shouldn’t just be about the next action date but should also map out a calendar of action that can show both Michael Gove and our members that we have a serious strategy to defeat these attacks.

In this context, LANAC’s Conference in Leicester on Saturday February 1st will be an important opportunity to discuss the situation we face, the strategy needed to win and the plans we must make to build strong Local Associations and to build firm national action to defend teachers and education.