Solidarity with the "Umbrella Revolution" ! 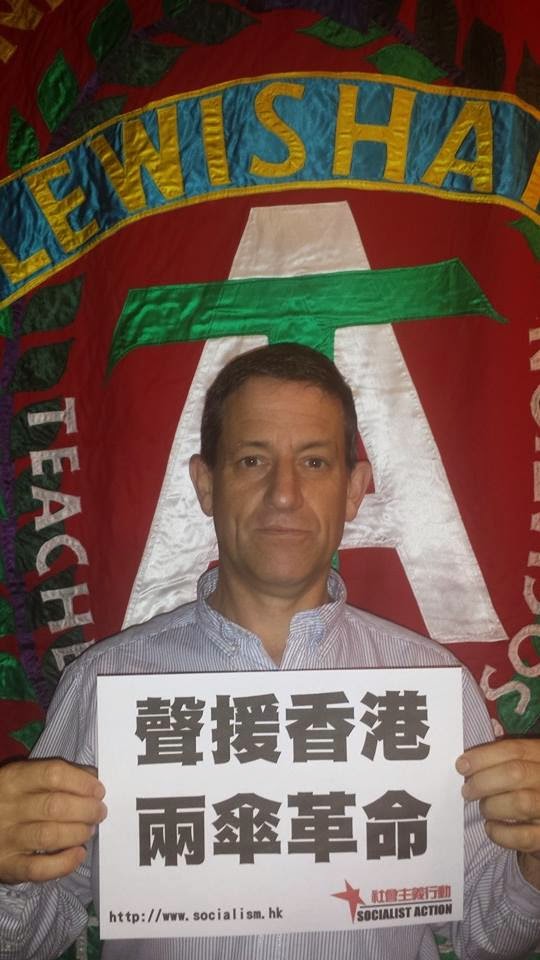 "This was the weekend that changed everything in Hong Kong. Mass popular resistance on the streets, by night and day, with mass gatherings of 100,000 and up to 180,000, spearheaded by the youth and a weeklong student strike, has forced the unelected Hong Kong government and thousands of heavily armed riot police to beat a retreat."

The inspiring struggle on the streets of Hong Kong, led by youth but with the support of other workers, especially teachers, is being supported by trade unionists across the world.

Thanks to chinaworker.info we have been able to download posters to send messages of support to Hong Kong - and here's ours from Lewisham NUT.

For a socialist analysis of the struggle from those in the midst of the battle, read further on:
http://chinaworker.info/en/2014/09/30/8245/


At today's meeting of the NUT National Executive, members signed the following petition, which can also be found on ipetitions:
We, the undersigned, support the right of Hong Kong citizens to decide who they want to vote for as Chief Executive rather than just to have a choice of candidates who are vetted and approved by Beijing.
We strongly condemn the Hong Kong police’s use of tear gas, pepper spray, batons against the protesting students and the public who only had towels, cling film and umbrellas to protect them.
We support Hong Kong teachers and other workers, who are taking strike action against police brutality and for the right for Hong Kong citizens to choose their own candidates.
我们签名支持香港市民自决权：选举特首需要人民自我决定，而不是在北京钦定的人选里做出选择!
我们强烈谴责直接听命于特区政府的香港警察使用催泪瓦斯，喷雾胡椒, 警棍暴力驱散只有毛巾，保鲜膜，雨伞保护自己的学生和示威民众!