TUSC launches its manifesto - "the only 100% anti-austerity party"

Today TUSC launched its manifesto in Canary Wharf - "in the belly of the beast" as national TUSC chair Dave Nellist described it.


The Trade Unionist and Socialist Coalition is fielding an historic working class challenge on 7 May. Across England, Wales and Scotland a coalition of trade unionists, working class campaigners, and socialists will stand in over 135 seats. That's one in five parliamentary constituencies. TUSC is also standing in around 650 council seats too.

Here's some information on the manifesto issued in TUSC's 'press pack':

TUSC is fielding the fastest growing general election challenge, standing in over 130 parliamentary seats and over 600 council seats on May 7. It is the newest political party to have an election broadcast this year; and TUSC’s rapid growth is down to its unique anti-austerity policies.

The Trade Unionist and Socialist Coalition has the distinction of having never supported cuts or privatisation, and of all the other significant general election campaigns is the only one not to commit to support austerity in the next parliament. TUSC councillors, spread around the country in Southampton, Walsall, Leicester, Warrington and Hull, have moved no-cuts budgets and refused to back attacks on jobs and services at a local level, and this is a policy TUSC is committed to continuing at a parliamentary level. Internationally, it is an anti-austerity appeal that has seen Syriza in Greece and Podemos in Spain reach such prominence.

Standing up for workers

TUSC has the backing of one of Britain’s most militant unions, the RMT (Rail, Maritime and Transport Union) and was co-founded by the late Bob Crow, that union’s former general secretary. The RMT, with 80,000 members, has subsequently endorsed TUSC at three consecutive conferences. In total, 15 national trade union figures are standing as part of TUSC: from Unison, the National Union of Teachers (NUT), Usdaw (retail and distribution union), PCS (Public and Commercial Services Union), NAPO (National Association of Probation Officers) and Joe Simpson, the assistant general secretary of the Prison Officers Association (POA). This is the largest number of leading trade unionists to stand for any party – and three quarters of our general election candidates are trade union activists; and the rest are active housing campaigners, anti-fracking activists, student campaigners, anti-racist activists.

TUSC is endorsing the NUT education manifesto, the Unite housing workers’ manifesto, the Blacklist Support Group and the Trade Union Freedom bill, as well as actively supporting strikes and workers’ struggles across Britain.

Whenever key TUSC policies are polled, there is huge support. 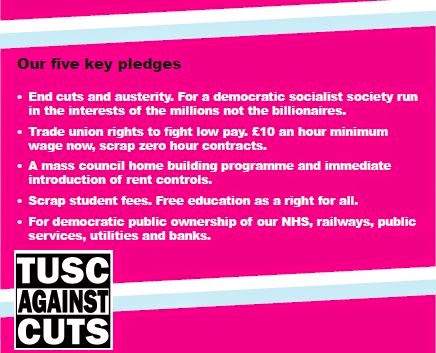 The Con-Dem government has inflicted five years of savage austerity on working class people. Unfortunately there is no prospect of this changing beyond the general election, as the leadership of the Labour Party has made it clear that a Labour government would not mean an end to austerity.

The Trade Unionist and Socialist Coalition (TUSC) argues that working class people should not pay for a crisis that we did not cause. That was why TUSC was set up in 2010, co-founded by the late Bob Crow, to show that there is a clear left-wing alternative to policies of public sector cuts, privatisation, militarism and environmental degradation.

TUSC has accepted from its start that there will be some Labour candidates who share our socialist aspirations and will be prepared to support measures that challenge the austerity consensus of the establishment politicians. But it is also committed to standing candidates or supporting others if that is the only way a working class anti-austerity socialist alternative can be articulated at election time.

Our coalition, of trade unionists, community campaigners and socialists, is united on the need for mass resistance to the ruling class offensive, and for an alternative programme of left-wing policies to help inspire and direct such resistance: