Today, NUT members at the John Roan school took their second day of strike action as part of the ongoing dispute over workload and new appraisal and teaching and learning policies being introduced by the school.

The response to today's action was even greater than the first action last week. Around 60 NUT members, parents and others gathered at the school gates to show their support for the strike. Alongside other speakers, I thanked NUT members for acting with such determination but also explained that, following talks that an NUT delegation had attended on Tuesday, negotiations were ongoing to see whether the dispute could be resolved. 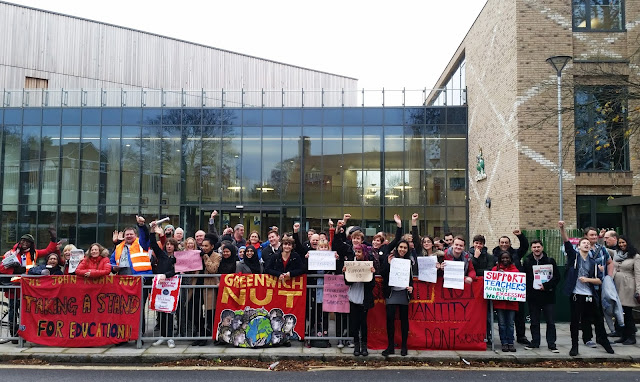 It is, therefore, extremely disappointing to then find that a provocative article has been posted on the South London Press website today which carries misleading statements that could damage those ongoing negotiations.

The NUT was not given an opportunity to answer this one-sided story by the SLP. For our part, we do not wish to be provoked into a 'war of words'. However, and having discussed with Greenwich NUT this evening, I feel that some facts need to be put on record:


"Urging teachers to attend talks"
The article starts by creating a false impression that governors are having to plea to the Union to attend talks. The headteacher and governors know full well that they met with the NUT negotiating team as recently as Tuesday evening and that the Union are awaiting revised proposals following those talks.

"Policies have been nationally approved"
The disputed teaching, learning, assessment and appraisal policies are not nationally agreed policies but ones which have been drafted by the John Roan school alone. They are new policies which change those that were previously in place at the school. That's why there is a dispute at the John Roan. We have explained that, as originally drafted, the policies are in breach of not only national NUT guidelines but even aspects of the national clarification for schools issued by Ofsted. We hope that negotiations can resolve these differences.

"Taking the right action ... to revitalise the school"
It is disappointing that the Chair of Governors chooses to describe his own school as 'mediocre' when students, parents and staff know that the John Roan is a good school. Teachers want to provide the best education for their students but do not agree that increasing workload and levels of scrutiny will achieve those aims. Instead, the NUT have outlined a number of proposals which we think will help address some of the specific issues that contributed to a recent dip in GCSE results.

"We want to resolve this matter swiftly"
The NUT certainly does. Yes, as Ms Powrie says in the article, "we have some amazing teachers here and a long tradition of inspiring students". What the NUT wants is to agree policies that allow those teachers and students to flourish in an atmosphere of trust and with teachers being given their contractual right to a reasonable work/life balance.

"The majority of John Roan staff support the changes"
The repeated assertion that the dispute is supported by only a minority flies in the face of reality. The NUT represents around 70% of teaching staff at the school. The school has now been twice closed to most year groups through NUT strike action. There is no evidence to justify the claim that most staff support the changes. Colleagues, including those not in the NUT, have expressed concerns about the policies. Again, we hope negotiations can address those concerns.
Posted by Martin at 22:57