What we are striking for - collective bargaining, class size limits, reduced workload, pay progression and fixed pay scales for all schools and academies

Below are two resources being circulated from the National Union which you may find useful for building the strike ballot.

The first is a short explanation of the dispute highlighting, in particular, the demands the NUT made in the dispute letter sent to the Secretary of State last month. Below that, is a link to a new PowerPoint for meetings updated to take into account the latest developments:


Stand Up for Education: teachers stood up, parents stood up, MPs stood up… Now let’s build the ballot to keep up the pressure!!

On Friday 6 May, Nicky Morgan was forced into the third major policy climb-down in the last month. This was a result of NUT members working with allies, campaigning against the incendiary white paper proposals. While this is undoubtedly a tactical victory for the NUT and a serious setback for the Secretary of State, it is clear that her course of direction remains the same, as shown in her public remarks over the weekend.

Her announcement made no concessions on the matters about which we wrote to the Secretary of State on 21 April to declare the dispute. In that letter we demanded she provide additional funding and take other necessary steps to ensure:

Nicky Morgan has said nothing to resolve our dispute. Real term cuts in funding will have major effects on schools and teachers, whether academy or maintained. They will further erode terms and conditions, increase workload and impede pay progression for teachers. As more schools become academies, the coverage of the national STPCD and Burgundy Book will narrow and these protections will gradually wither away.

Therefore we remain in dispute and building for the ballot remains the most important and urgent priority. We will ballot members in all schools and academies for “discontinuous” strike action, and intend to call a one-day strike in early July and to announce an additional autumn term dates as well.

The ballot opens on Monday 23 May and will close on Wednesday 22 June. We need a big turnout and a huge YES vote.

We have updated the materials available for you to use in your member and rep meetings.

At the same time our Stand Up For Education campaign continues and we can use the momentum we have generated to press for real changes in policy direction.

That is why the NUT campaign to Stand Up for Education continues.

Teachers stood up. Parents stood up. MPs and councillors stood up. Even the Institute of Directors stood up and the CBI has said the way schools are measured does not make sense.

Stand up for Education:
Let’s keep up the pressure. 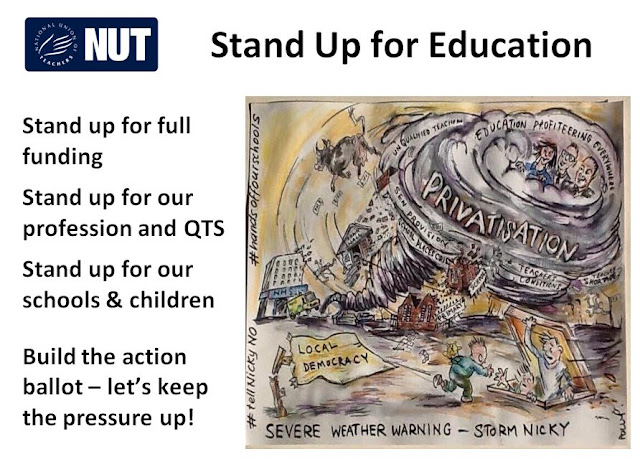 The full updated PowerPoint can be downloaded here 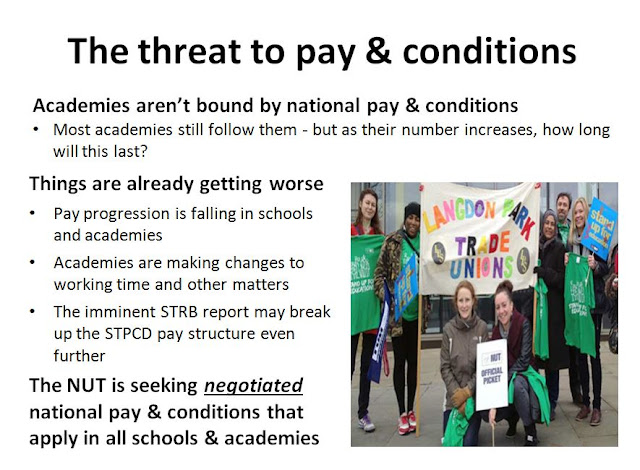