£550 million cuts to London schools can't be 'managed', they must be fought

The Government had accused funding campaigners of scaremongering, but the updated figures are even worse than we previously predicted.  98% of schools face a real terms reduction in funding for every pupil.

Unlike the illustrative figures published alongside the DfE’s December 2016 school funding consultation, the website estimates are expressed in real terms per pupil, using the 2015/16 funding as the baseline. The calculations were made using the following evidence:

A bleak picture nationally, but especially in London
Nine out of the ten worse-hit constituencies are in London. Every school in Justine Greening MP’s constituency of Putney will experience real terms cuts, with an average loss of £655 for every pupil. 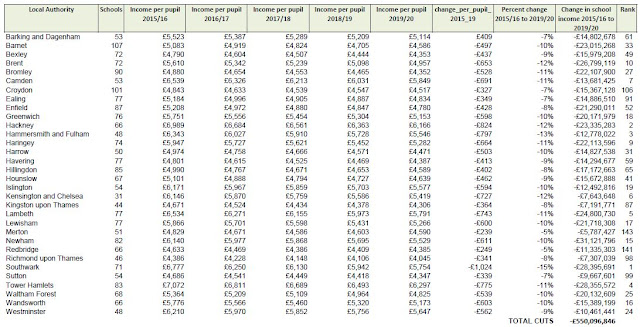 “With 70 per cent of London schools set to receive less money, by as much as 3 per cent, from 2018/19, there will be considerable concern amongst school leaders about how this can be managed and the possible impact on school standards. While some may argue this is a relatively small amount and schools should be able to absorb this easily, it is unlikely they will be able to do so in addition to the wider budgetary pressures highlighted recently by the National Audit Office”.

London Councils are correct to warn about the impact but the 11 January 2017 House of Commons Report on “School Funding in England. Current system and proposals for 'fairer school funding' " makes clear that even the 3% ‘floor’ is not any kind of permanent protection from ongoing cuts:

“Losses will be limited to a maximum of 1.5% per pupil in each of 2018-19 and 2019-20. This means that at some schools –the biggest ‘winners’ and ‘losers’- transitional protection will apply for some years. The full impact of the new funding formula will not be felt at these schools until this transition period is over”.

London Councils correctly say that “The NAO’s report into the financial sustainability of schools found that schools in England face a £3 billion funding shortfall by 2020” and that “The NAO estimates that over 60% of secondary academies had a budgetary overspend in 2014/15. Therefore, even a school that will have an uplift as a result of the introduction of the NFF is likely to have an overall budgetary deficit in this financial climate”.

The NAO report confirms that many maintained schools are also already in this vulnerable position. 59% of maintained secondary schools spent more than their income in 2014-15. 15% were already actually in deficit with the average deficit as high as £326,000.

In the six-union press release of 16 January 2017, Russell Hobby, General Secretary of the National Association of Head Teachers, says:  “School budgets are being pushed beyond breaking point. The government's £3 billion real terms cut to education funding must be reversed or we will see education and care suffer. Already heads are being forced to cut staff, cut the curriculum and cut specialist support. A new funding formula is the right thing to do, but it cannot be truly fair unless there is enough money to go round in the first place.”

London Councils report that: “the DfE has also committed to allocating an additional £200m in 2018-19 and 2019-20 (a total of £400m over a two year period) on top of the current value of the schools block. This money has been found to provide protections for schools facing reductions”.

However, the latest House of Commons Report points out that “The Coalition Government provided an additional £390 million in funding in 2015-16 to what it described as the least fairly funded local authorities”. So top-up funding of an additional £200m a year will have a very small effect, especially in comparison to a £3billion real terms shortfall.

This echoes the DfE’s Executive Summary (para 60) stating that “London, along with other inner city areas, faces high levels of deprivation and pupils with EAL. Under our formula, schools in inner London will attract 30% more funding per pupil than the national average. This is because funding will be matched to need, and so London schools will continue to receive significant funding to help them support their pupils with additional needs”.

However, as the April 2016 ‘Long-Run Trends in School Spending in England’ report by the IFS explains “Local authorities in London have for a long time received higher levels of spending per pupil than the rest of England, with inner London receiving the highest levels. Spending per pupil in inner London is 40% higher than outside London, reflecting higher levels of social deprivation and costs in London (e.g. higher teacher salaries). However, this differential was higher in the early 1980s, at around 60%”.

So the new factors represent a further cut in the relative funding for Inner London schools. 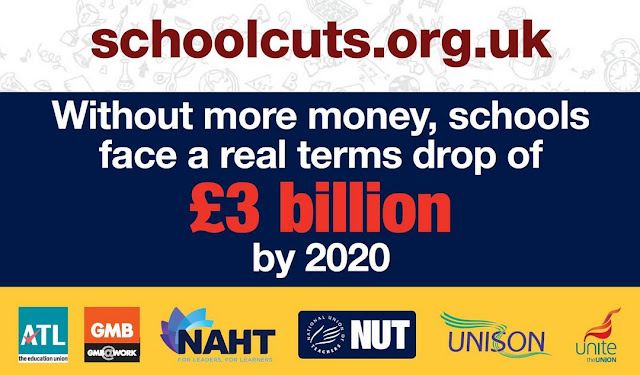 
The DfE modelling underestimates the real effect of their cuts on schools across the country - and especially in London and other areas of higher disadvantage. The six-union backed ‘school cuts’ figures best illustrate the bleak picture facing schools.
Cuts of this scale cannot just be 'managed' by employers and school leaders. We have seen how, for example with 'social care', such an approach leads to disaster for those needing support. Our children deserve better. That's why everyone who values education must campaign together to reverse these cuts.
If necessary, schools and Local Authorities should use their powers to set licensed deficits to protect education while fighting to demand genuinely 'fair funding' that is sufficient to meet every child's needs.
Posted by Martin at 14:07