Please see below both a press release and a statement to parents from the NUT in relation to the ongoing dispute at Forest Hill School in Lewisham.

The ninth day of strike action will take place on Tuesday. NUT General Secretary Kevin Courtney will be attending the picket line outside the school in Dacres Road, SE23 from 8 am.


UPDATE: PHOTOS FROM THE DAY: 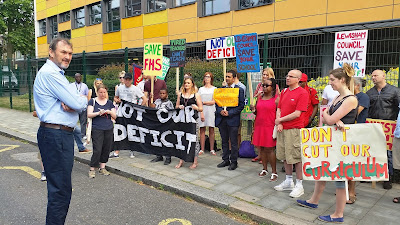 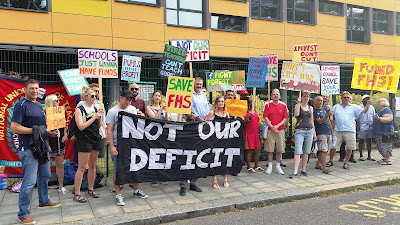 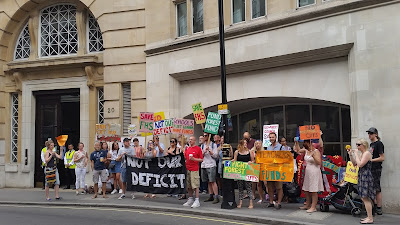 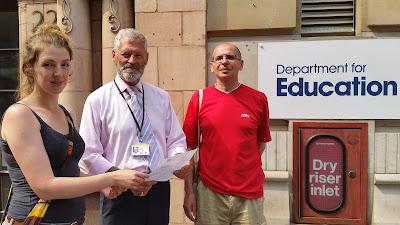 A group of school-age parents with their striking NUT teachers take their picket line to DfE offices at 10.30am today to tell Justine Greening to stop underfunding all schools and release emergency funds for Forest Hill School, an 11-18 boys school in Lewisham, south-east London.

Nationally, schools are facing the largest real terms cuts for 30 years (i) and there is strong evidence to suggest that expenditure levels directly impact pupil performance (ii). Locally, Lewisham Council instructed Forest Hill School (FHS) to recover an estimated £1.3 million pound deficit (iii) and a further £1 million cuts are scheduled to be made by 2022 (iv). 2017 savings are being made through staffing cuts which has caused 23 administration and classroom support staff posts to be cut and 15 teaching staff posts to be cut (v). In response, FHS NUT members have been on strike for 9 days so far this academic year.

All FHS teachers face increased teaching workload and a pay cut for many responsibility post holders. 23 teachers, many of them with more than 15 years experience at the school, have decided to resign rather than go through redundancy procedures or accept proposed changes. As a result, staff turnover will involve at least a third (30%) of teaching staff this academic year. This is before further planned changes to the national funding formula (vi).

The parent action group have held two public meetings, both with over 100 attendees, indicating the level of frustration with what they believe could be destructive changes to an otherwise excellent school. Parents have questioned why the school should prioritise the annual near £1 million pounds (vii) payment on its Private Finance Initiative contract above retaining experienced staff. Parents and teachers both claim that the success of the school, particular an inner-city boys school, is dependent on stable relationships built over time. They argue that these proposed changes, particularly increased workload and reduced non-contact time, will erode space for those vital relationships which many call the “Forest Hill spirit”. 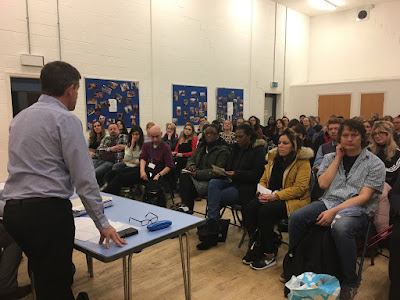 Phil Beadle from Channel 4’s Unteachables and a FHS parent said:
“Parents, staff and the council all agree that the education of the boys at Forest Hill is paramount. As parents, we believe these draconian cuts can only have a negative impact on the educational outcomes of the boys and on the lives of profoundly valued members of the community: our children’s loved and respected teachers”

Saraid Dodd, NUT rep at Forest Hill School, said: “We are chanting ‘not our deficit, it’s our school don’t mess with it.’ Our students deserve better than this. We are striking to defend our school and to make clear to local and national government that we believe the value of education goes beyond numbers on balance sheets.”

For further information contact Martin Powell-Davies of NUT on: M.Powell-Davies@nut.org.uk

i “Long-run comparisons of spending per pupil across different stages of education”, Chris Belfield, Claire Crawford and Luke Sibieta, The Institute for Fiscal Studies, 27 February 2017, https://www.ifs.org.uk/publications/8937

ii “The Effects of Resources Across School Phases: A Summary of Recent Evidence”, Stephen Gibbons and Sandra McNally, London School of Economics, 2013, http://cep.lse.ac.uk/pubs/download/dp1226.pdf 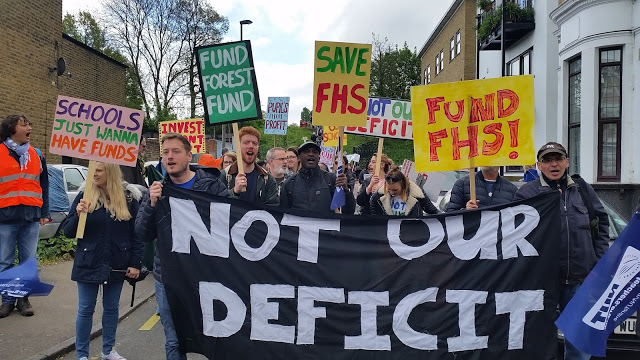 As an NUT group, Forest Hill NUT members agreed to withdraw strike action for the main exam period and in the hope that management and employers would agree proposals that would allow us to settle the dispute without further strike action. Sadly, there has been no such settlement and all parties have not agreed to meet with us as we have requested, so we are continuing with action.


The intervening weeks have brought a positive change – a General Election result that makes it me likely that we can persuade a weakened Government to reverse school cuts – and should therefore persuade the Council to relax their demands on FHS. However, they have also brought the sad confirmation of what we have been warning all along – that a failure to act on jobs and workload would result in many staff voting with their feet to leave. We have been informed that 23 teachers have resigned for the end of term on top of 5 teacher redundancies and 3 temporary contracts not being renewed. Together with support staff, that means over 50 staff will have left this year.

Forest Hill needs more staff
The NUT’s figures show that the cuts package has been based on a faulty analysis from the start. It was argued that FHS spent disproportionately more on staffing and therefore staffing budgets had to be disproportionately hit. This was never the case. That mistake needs correcting by agreeing to restore some of the staff cuts.
We are seeking assurances that the school will recruit:
1. More teachers to allow a reduction in teacher contact time
2. More staff to reverse the most serious cuts, particularly to SEN and pastoral provision.

We want to continue to go above and beyond for our students. Good education relies on strong relationships. We can’t reverse those resignations now, but we can keep putting pressure on the council to improve our conditions to prevent further resignations next year and allow us to give our students the quality of education they deserve.

The Local Authority and School CAN act to provide additional staffing
Up to now, the Council and the School have both insisted that it has no room to manoeuvre. We have shown that this is simply not the case. For example:
1. The school budget forecasts include a £100,000 figure for 'contingency'.
2. While staffing has been cut, a number of non-staffing payments are being increased significantly. This could provide scope for redirecting budgets.
3. The School has had to find an additional £0.5 Million from its own budget to pay for redundancy costs. NUT Solicitors have now written to the Council to challenge this decision
which we think is based on an unlawful Council policy.
4. There is increasing pressure on the Government to find additional funding for schools. The Council could postpone some of the cuts while the national campaign to reverse school cuts continues.
5. As other Councils have shown, there are clear mechanisms open to the Council to reduce the funding pressures on FHS, particularly by agreeing to extend the time that it has set for the licensed deficit to be repaid from the school budget.
6. Other Councils have also supported schools through directing funding towards them for specific purposes. Lewisham Council could also do the same.