Supporting schools, staff and families left with the consequences of Grenfell

Hundreds of schools are taking part in #GreenforGrenfell events today to show support, sympathy and solidarity with all those affected by last week's horrific fire. 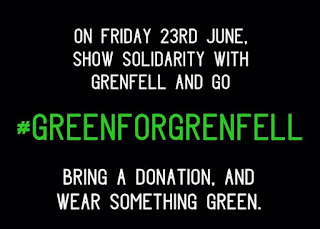 The consequences of the fire will, of course, last long after the immediate events and publicity. As key parts of their local communities, schools will have a particularly important role to play but, against a background of school cuts, will need the resources to be able to provide the support required.

School staff themselves have been directly affected by the fire and, across London and beyond, teachers will be sharing the same anger and concerns as others will, both about this avoidable disaster and the need to ensure the safety of all schools and homes in future as well.

On behalf of the London NUT Regional Office, I issued the following statement to our Divisions earlier this week:

We have all been shocked by the disastrous fire at Grenfell Tower last week.


You have already received information about ways that NUT Divisions and schools can show their solidarity and support for those affected including ‘Wearing Green For Grenfell’ this Friday 23rd June and details of charities working in the area. However, I wanted to make sure you were also updated on how NUT members have been affected by the fire.

As trade unionists are part of their local community, it should be no surprise that a number of trade unions, including UNITE and PCS, have already reported that they had members living in Grenfell Tower. I can inform you that two NUT members were also Grenfell residents. They both managed to escape from the building that night but both will be grieving for neighbours who did not. The Union is, of course, offering these colleagues our help and support.

Schools in the area now have to support children and families in very difficult circumstances. We are liaising with the ‘Triborough’ Divisions of Hammersmith & Fulham, Kensington & Chelsea and Westminster to assist NUT members in making sure that schools and families have the support they need. A national joint union statement was released at the weekend calling for urgent action “to provide for the security, shelter and well-being of North Kensington’s children”.

Of course, it won’t only be in West London where staff and children will have concerns and fears about the safety of their homes and schools. A second joint union statement was released yesterday “seeking urgent reassurances about fire safety in schools in light of the tragic and avoidable fire at Grenfell Tower”. I would encourage Divisions to approach your Local Authority to seek reassurances about steps being taken by them to secure fire safety in schools and tower blocks locally.

If you have specific concerns and/or if you hear of NUT members who may have been directly affected by the fire, please do contact the London Regional Office for support".
Posted by Martin at 11:34

Email ThisBlogThis!Share to TwitterShare to FacebookShare to Pinterest
Labels: Grenfell