The NEU has published a summary of recent scientific papers that clearly confirm that the start of any ‘phased return’ of additional pupils to schools in the UK would be unsafe to staff and risk a ‘second wave’ of infection in our communities. 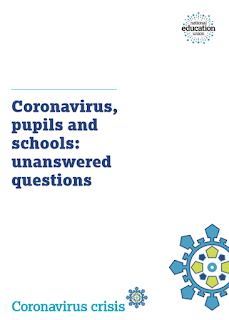 'Children may be as infectious as adults'


Scientific knowledge of this new virus continues to grow. However, it seems increasingly certain from the latest research quoted by the NEU that children of school age do play a significant role in the transmission of the virus. As the conclusion of one German study based on an analysis of SARS-CoV-2 viral load puts it “children may be as infectious as adults”.


At a time when there are still both substantial numbers of infected individuals in our communities and, in turn, non-infected individuals susceptible to the virus, steps that increase the likelihood of transmission would risk a new increase in numbers of infections – and deaths. The NEU research also confirms that opening schools would be a particularly dangerous step to take.


Extending the numbers of children in schools will extend that risk immediately to staff, and then to families of both staff and other children’s families. Those family clusters are likely to then be places where there will be further transmission and damage to public health generally.


As another German study quoted by the NEU explains “Schools are a natural place of contact for the children and teachers … they are also a major location to spread the infection within the municipality”. Its modelling suggested that “if the population still contains a large number of susceptible individuals and sufficient infected individuals, then a selective opening of locations (such as the opening of schools) … can lead to a severe second wave of infection”.


The research also confirms that, as the European Centre for Disease Prevention and Control puts it, “contact tracing in conjunction with robust testing and surveillance systems, is central to control strategies during de-escalation”. Yet those systems simply will still not be ready – certainly not comprehensively and robustly – for some time yet.

In short, it is too early to start any ‘phased return’ of schools. Instead, the necessary resources must be found both to put the robust testing and tracing strategies in place and to continue to support children's education through other means, as teachers and schools have done from the start of the 'lockdown'.


Union tests have not been met


The research confirms that the conditions set out by the NEU in its ‘5 tests’ – and then clarified in the joint school union ‘key tests’ have not been reached.


Along with other important points, the joint letter on behalf of TUC-affiliated unions GMB, NAHT, NASUWT, NEU, UNISON and Unite rightly stated that:


·         There must be clear scientific published evidence that trends in transmission of Covid-19 will not be adversely impacted by the reopening phase and that schools are also safe to reopen. The NEU research shows that, on the contrary, the existing evidence shows the opposite.


·     There should be no increase in pupil numbers until the full rollout of the government’s “test, trace and isolate policy”, with testing targets consistently met over a number of weeks and case numbers falling consistently. Again, it is clear that no such full and consistent rollout is yet in place.


·       Governing Bodies and School leadership teams should continue to make decisions to close schools in cases of local outbreaks/upsurge in Covid-19 cases. Schools will need local data as part of the government’s testing and tracing strategy. Not only is the data not yet available, neither are clear protocols in place, as set out in the NEU’s ‘Test 4’: “to test a whole school or college when a case occurs and for isolation to be strictly followed”. These agreed protocols must be set out, resourced and agreed in any risk assessment before any increase in the numbers of pupils on site.

Unions must assess risks based on this research


The fact that children may be as infectious as adults but rarely show serious symptoms, must be taken fully into account when drawing up risk assessments.


Some returning children – and staff - will be carrying the virus without showing any symptoms such as a fever or cough. That’s why it is not sufficient to rely on detecting symptoms such as temperature readings nor to only test and isolate children or staff showing symptoms.


As NEU ‘Test 3’ sets out, schools will need to have arranged “comprehensive access to regular testing for children and staff to ensure our schools and colleges don’t become hot spots for Covid-19”. It would be unsafe to restrict that regular testing only to those with symptoms.


In discussing the role of testing in Covid-19 control, an Imperial College report quoted in the NEU Research states, in the context of health care workers, that weekly screening of all staff, including those without symptoms, would be significant in preventing onward transmission.


A similar approach needs to be adopted for school staff, with resources provided for trained health staff to be carrying out regular testing of all school staff. In turn, those test results should be linked to the protocols in place for contact tracing and isolation of close contacts, which might have to include school closure, as set out in the joint union letter above.


Regular testing of children may be more difficult to carry out as nasal swabbing can be uncomfortable and upsetting if carried out properly. However, children could certainly be included as social contacts of staff that test positively, and as part of contact tracing protocols that include their families.


Of course, there are many other issues that will also need to be considered in detailed risk assessments. Because of aerosol transmission in confined spaces, it cannot be assumed that PPE is only required by staff in specialist settings. Risk assessments must also cover scheduling of regular cleaning of surfaces and hand washing, for example.


Above all, if the Government or employers proceed to try and increase pupil numbers through a ‘phased return’ leaving staff to work in unsafe conditions, then rights under Section 44 of the ERA 1996 must be understood and implemented. These rights are set out in the leaflet produced by ‘Socialist Party in Schools’, although the content is transferable for wider trade union use. 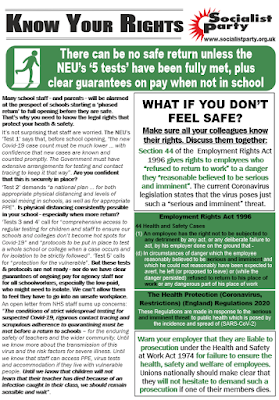