We can't go back to unsafe schools

Boris Johnson's announcement that he intends primary schools in England to re-open to Early Years, Reception, Year 1 and Year 6 from the beginning of June was met with disbelief and anger by school staff and parents alike.

Primary schools fully back by end of June?

The full ‘Plan to Rebuild’ released today shows that their plans are even worse. Yes, it says the return can be ‘phased’ at first – but not for long. Just a few weeks later, they are aiming for “all primary school children to return to school before the summer for a month”. That would mean full classes and full primary schools before the end of June!

A plan to open even for Year 6 alone was hard enough to accept when infection rates are still so high. Medical research is clear that re-opening schools now will lead to a ‘second wave’ of infections and deaths in school communities. Their reckless rush towards a full return of primary schools in a few weeks shows a callous disregard for health and safety.

A callous disregard for health and safety

It will be impossible to stop transmission of the virus amongst young children, particularly in settings where education is so dependent on play and sharing of toys and equipment. It will be impossible to maintain consistent physical distancing in full primary schools. Parents will be bringing their children to and from school, further accelerating the transmission of the virus from children to adults and from one family to another.

Having got primary staff back, the plan is also for secondaries to start soon afterwards, starting with Years 10 and 12. Policing distancing of teenagers will also be difficult.

Schools unsafe until union tests are fully met
If Johnson was seriously concerned about safety and the danger of a second Covid-19  ‘spike’ he wouldn’t even be contemplating such dangerous proposals. In reality, he is simply responding to the wishes of big business to make sure childcare is in place so their workforce can be called upon to generate their profits again.

If the Tories were serious about ending the lockdown safely, they would first make sure that the tests set by the NEU and jointly by all the TUC affiliated school staff unions were met. They set out what’s needed to ensure safety in a school context – a low level of infections in the community, regular testing of staff, a “test, trace and isolate policy” fully up and running, clear protocols for isolation of adult and child contacts when positive tests are recorded, safeguards for vulnerable pupils and staff, PPE, cleaning, and all the other measures needed to minimise the risk of transmission of the virus.

Safety reps should demand firm risk assessments drawn up on the basis of these key tests from any managers planning to implement Johnson’s plan. Staff should refuse to go into school to carry out any such preparations.

Our message must be - we’re not going back
You don’t need a detailed assessment to know that Johnson’s plan is unsafe. It’s absolutely clear that those tests cannot be met in the next few weeks. It’s equally clear therefore that schools will not be safe environments for staff, children or parents. That’s why the message to Johnson must be clear, swift and overwhelming – we’re not going back!

Unions need to respond quickly and firmly to make sure Johnson has to back away from his unsafe plans. It’s now clear that Ministers have only been pretending to listen to union concerns while all the time weighing up their chances of enforcing a return, riding roughshod over union opposition. They mustn’t be allowed to succeed.

Correctly, the NEU Press Release in response to Johnson’s statement immediately threatened that “if schools are re-opened to blatant breaches of health and safety, we will strongly support our members who take steps to protect their pupils, their colleagues and their families”. But unions need to be clearer still – there is no ‘if’ here, Johnson’s plan clearly represents such a blatant breach. All unions must fully back members who assert their rights under section 44 of the Employment Rights Act not to return to a dangerous workplace.

Organise to jointly protect safety - and pay
But time is short. Reps and Officers must make sure urgent online meetings are organised with their members. They must explain the threat to their safety, their rights under the legislation and discuss together how to jointly protect themselves. At the same time, unions should be immediately asking reps to urgently check and update workplace membership records in preparation for industrial action that may be needed at a later date to defend union members and staff health and safety collectively.

Unions must also oppose any ending of the furlough scheme and organise support for agency workers and low-paid staff in hardship. No worker should be forced through poverty back into an unsafe workplace.

Parents, Heads and Governors too!
Parents should also organise together to defend their community safety too. Headteachers and Governors should also be making clear that they cannot assess the risks in Johnson’s proposed return as acceptable and will be refusing to implement Johnson’s wishes.

If Johnson realises that he faces the prospect  of a mass refusal to go along with his reckless plan, he can be forced to backdown.

Safety must come before ‘childminding’ -  which is all that Johnson is interested in. It is too early to start any phased return of schools. Instead, the necessary resources must first be found both to put robust testing and tracing strategies and other safety requirements in place. Until then, staff should continue to support children's education through rotas and distance learning, as schools have been doing from the start of the 'lockdown'.

● Reckless Johnson's proposals are unsafe for our staff, children and communities
● Trade Union ‘Key Tests’ can't possibly be met by June
● Unions must fully back members' right to protect their own safety
● Let's all make clear, we're not going back to unsafe schools 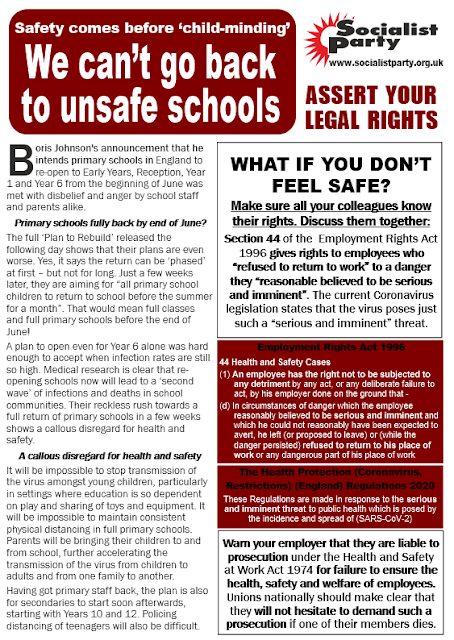