The Government, assisted by their media allies, are piling on the pressure to get schools fully opened for September. It’s clear that they want to abandon any effective social distancing so that full classes are packed into classrooms. They expect staff and parents to ignore the obvious risk of infection being spread and schools becoming the “institutional amplifiers” of the virus, as independent SAGE have previously warned.

Yet the key part of any public health plan for a genuinely safe return to schools and to workplaces in general is still missing – effective testing and tracing. Independent SAGE issued a damning report on June 18 that confirmed that the existing contact tracing arrangements are simply “not fit for purpose”.

Independent SAGE’s latest Report re-emphasises that “a strong Find, Trace, Test, Isolate and Support (FTTIS) system underpins the safe reopening of our economy and our lives without letting the pandemic spread out of control” and that “the situation is becoming increasingly urgent as social distancing measures are relaxed against scientific advice”
The NEU have highlighted earlier warnings from independent SAGE about wider school opening. Now the Union needs to do so again about the ongoing failure by the Government to meet the Union’s “5 tests”.

“Test One" rightly demanded that the case count shows a "sustained downward trend and confidence that new cases are known and counted promptly. And the Government must have extensive arrangements for testing and contact tracing to keep it that way".

"Test Three" called for "comprehensive access to regular testing for children and staff to ensure our schools and colleges don't become hot spots for Covid-19”.

Neither of those tests have been met – yet they remain essential for schools to be able to fully re-open with safety for both staff and the wider school community.

Testing and tracing “chaotic and haphazard”

The drive back to schools is being justified on the basis of falling rates on infection and mortality. Thankfully, yes, the numbers in the UK are clearly well below what they were at the ‘peak’ of the pandemic, but it is far from certain that they are low enough to drastically reduce social distancing measures without risking a second wave of the virus. More to the point, without an effective testing regime, how can schools and communities be sure what actual case levels are? Without effective contact tracing, how can any outbreak be controlled?

As Independent SAGE state, “lockdown has come at great cost, both financially and in terms of the health and wellbeing of those particularly vulnerable … at some point, we must reduce these restrictions. However, to do so, we must try to find every new case, test them, trace their contacts, and then ask the new case and their contacts to isolate for two weeks to prevent further spread, with the support they need to continue with their lives in these new circumstances”.

“We have no idea how many people contacted are actually isolating and what health and other support they are receiving. Nor do we know how many contacts go on to become symptomatic and subsequently test positive”.

“Out of 200 tracers at my agency we have only had four contacts to call between us in four weeks. There is no data, test results are not being passed to tracers. It’s an absolute scandal” - Anonymous contact tracer during ISAGE public consultation 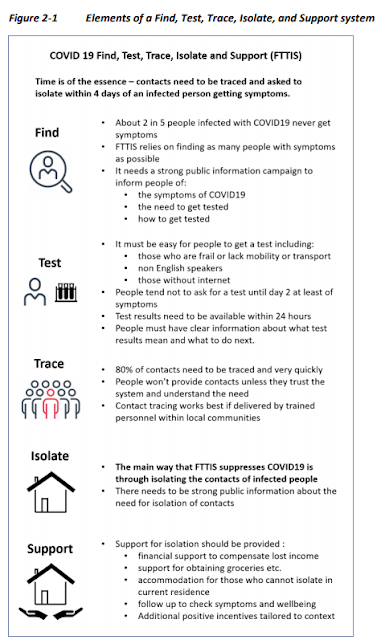 Income and accommodation for those being asked to isolate

Again, independent SAGE are clear in their advice:

“The willingness of people to report symptoms, especially at an early stage, will be affected by the practical implications of doing so … Equally, people will be less willing to provide names of contacts if they fear that these will be disadvantaged in terms of employment, housing or immigration issues. However, the greatest problems are likely to be at the stage where contacts are asked to self-isolate, particularly as they will likely be feeling physically well” (Remember, as the Report points out, around 40% of those infected will never get symptoms).

“Many BAME and deprived families live in multigenerational families. These families need to be supported and provision for alternative accommodation should be made available for multigenerational families, key workers and those who are homeless. This will also need to include provision for food and essential amenities. If individuals are to comply with isolation, employers will also need to ensure that those isolating are paid during isolation and do not suffer financial hardship”.

Using the Crisis to widen privatisation

The Government have been using the crisis as an opportunity to strengthen the grip of private interests in running public services, instead of prioritising public health needs. Their latest plan to employ low-paid tutors hired through selected private agencies, rather than increasing school funding directly through Local Authorities, is all part of the same agenda.

Independent SAGE are highly critical of SERCO’s performance saying it “raises serious questions about the efficiency and value for money of the contracts and highlights the vital role being played by the public health teams in track and trace”.

It also points out that “the lack of PHE tracing and testing capacity to cope with a large pandemic was noted back in February. Rather than an immediate investment in existing systems, there was a 3-month delay before the announcement of a new Test and Trace system on 27th May – during which time the UK suffered one of the highest death rates in the world”.

The Report makes three recommendations “to build a protective shield against further outbreaks or, worse, a second wave”.

Firstly that “testing and tracing alone using a centralised system alone simply will not work. We need local involvement and ownership using our existing public health and primary care teams, GPs, local hospital laboratories, school nurses and environmental health officers to ensure we can respond quickly to outbreaks and to build local trust”.

Secondly, sustainable “Find, Test, Trace, Isolate, and Support (FTTIS) as recommended by the World Health Organisation” including “GPs should be involved in testing hubs and ordering of tests as quickly as possible and results returned within 24 hours for the system to work” and “Rapid isolation of cases and contacts is critical” and “Successful countries provide facilities available for those asked to isolate including food and finance for vulnerable groups, and appropriate guarantees from employers. Clinical support for monitoring the health of suspected cases, cases and contacts in the community is vital”.

Point the finger at the Government, not the unions

Independent SAGE’s warnings about the ongoing lack of a properly functioning ‘Find, Test, Trace, Isolate, and Support’ system needs to be a key part of the NEU’s counterarguments against the reckless drive to a full return in September.

Instead of the public being encouraged to blame the unions for simply doing their job - to protect staff and community safety - the unions should be encouraging the public to place the blame squarely where it lies – with the Government and its failing private sector allies.


The Full Report can be read here:
https://www.independentsage.org/wp-content/uploads/2020/06/FTTIS-12.42-160620-names-added.pdf
UPDATE: 22/06/20
Independent SAGE has also issued further concerns, via Twitter, about the proposed reduction of Social Distancing measures from 2m to 1m - see below: 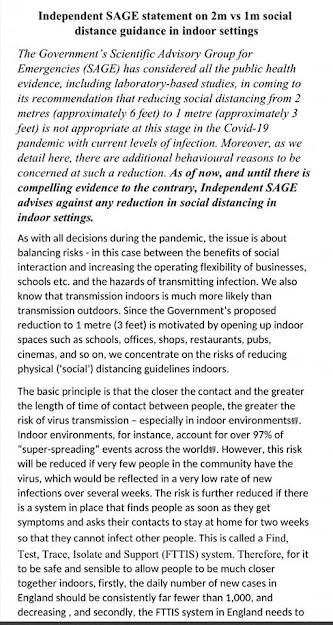 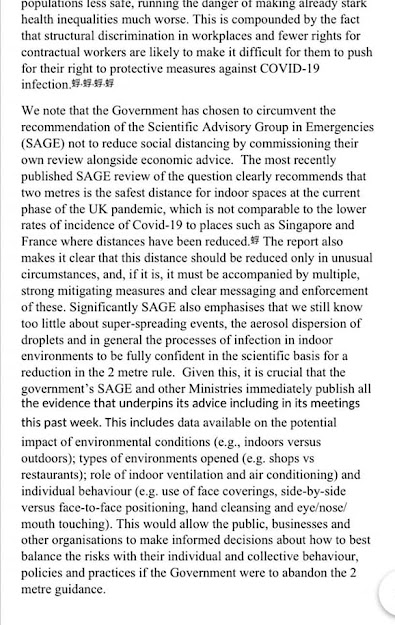