Following news of another retreat by the Tories over full reopening of primary schools, Socialist Party in Schools has issued this leaflet today. It can be downloaded here. 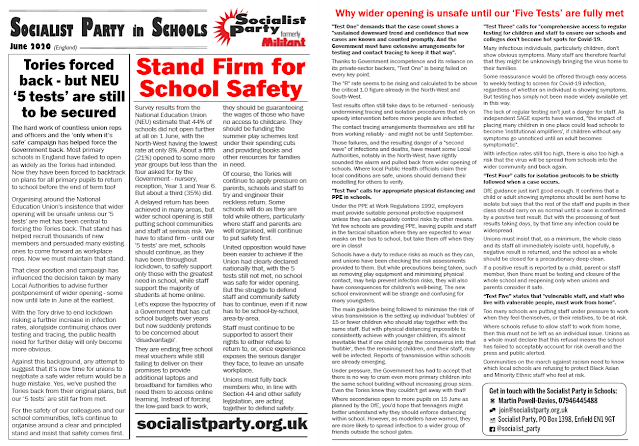 The hard work of countless union reps and officers and the ‘only when it’s safe’ campaign has helped force the Government back. Most primary schools in England have failed to open as widely as the Tories had intended. Now they have been forced to backtrack on plans for all primary pupils to return to school before the end of term too!

Organising around the National Education Union's insistence that wider opening will be unsafe unless our '5 tests' are met has been central to forcing the Tories back. That stand has helped recruit thousands of new members and persuaded many existing ones to come forward as workplace reps. Now we must maintain that stand.

That clear position and campaign has influenced the decision taken by many Local Authorities to advise further postponement of wider opening - some now until late in June at the earliest.

With the Tory drive to end lockdown risking a further increase in infection rates, alongside continuing chaos over testing and tracing, the public health need for further delay will only become more obvious.

Against this background, any attempt to suggest that it’s now time for unions to negotiate a safe wider return would be a huge mistake. Yes, we've pushed the Tories back from their original plans, but our ‘5 tests’ are still far from met.

For the safety of our colleagues and our school communities, let's continue to organise around a clear and principled stand and insist that safety comes first.

Survey results from the National Education Union (NEU) estimate that 44% of schools did not open further at all on 1 June, with the North-West having the lowest rate at only 8%. About a fifth (21%) opened to some more year groups but less than the four asked for by the Government - nursery, reception, Year 1 and Year 6. But about a third (35%) did.

A delayed return has been achieved in many areas, but wider school opening is still putting school communities and staff at serious risk. We have to stand firm - until our '5 tests' are met, schools should continue, as they have been throughout lockdown, to safely support only those with the greatest need in school, while staff support the majority of students at home online.

Let's expose the hypocrisy of a Government that has cut school budgets over years but now suddenly pretends to be concerned about 'disadvantage'.

They are ending free school meal vouchers while still failing to deliver on their promises to provide additional laptops and broadband for families who need them to access online learning. Instead of forcing the low-paid back to work, they should be guaranteeing the wages of those who have no access to childcare. They should be funding the summer play schemes lost under their spending cuts and providing books and other resources for families in need.

Of course, the Tories will continue to apply pressure on parents, schools and staff to try and engineer their reckless return. Some schools will do as they are told while others, particularly where staff and parents are well organised, will continue to put safety first.

United opposition would have been easier to achieve if the Union had clearly declared nationally that, with the 5 tests still not met, no school was safe for wider opening. But the struggle to defend staff and community safety has to continue, even if it now has to be school-by-school, area-by-area.

Staff must continue to be supported to assert their rights to either refuse to return to, or, once experience exposes the serious danger they face, to leave an unsafe workplace.

Unions must fully back members who, in line with Section 44 and other safety legislation, are acting together to defend safety.

"Test One" demands that the case count shows a "sustained downward trend and confidence that new cases are known and counted promptly. And the Government must have extensive arrangements for testing and contact tracing to keep it that way".

Thanks to Government incompetence and its reliance on its private-sector backers, "Test One" is being failed on every key point.

The "R" rate seems to be rising and calculated to be above the critical 1.0 figure already in the North-West and South-West.

The contact tracing arrangements themselves are still far from working reliably - and might not be until September.

Those failures, and the resulting danger of a "second wave" of infections and deaths, have meant some Local Authorities, notably in the North-West, have rightly sounded the alarm and pulled back from wider opening of schools. Where local Public Health officials claim their local conditions are safe, unions should demand their modelling for others to verify.

Under the PPE at Work Regulations 1992, employers must provide suitable personal protective equipment unless they can adequately control risks by other means. Yet few schools are providing PPE, leaving pupils and staff in the farcical situation where they are expected to wear masks on the bus to school, but take them off when they are in class!

Schools have a duty to reduce risks as much as they can, and unions have been checking the risk assessments provided to them. But while precautions being taken, such as removing play equipment and minimising physical contact, may help prevent infection risks, they will also have consequences for children's well-being. The new school environment will be strange and confusing for many youngsters.

The main guideline being followed to minimise the risk of virus transmission is the setting up individual 'bubbles' of 15 or fewer children who should stay together with the same staff. But with physical distancing impossible to consistently achieve with younger children, it's almost inevitable that if one child brings the coronavirus into that 'bubble', then the remaining children, and their staff, may well be infected. Reports of transmission within schools are already emerging.

Under pressure, the Government has had to accept that there is no way to cram even more primary children into the same school building without increasing group sizes. Even the Tories knew they couldn't get away with that!

Where secondaries open to more pupils on 15 June as planned by the DfE, you'd hope that teenagers might better understand why they should enforce distancing within school. However, as modellers have warned, they are more likely to spread infection to a wider group of friends outside the school gates.

"Test Three" calls for "comprehensive access to regular testing for children and staff to ensure our schools and colleges don't become hot spots for Covid-19.

Many infectious individuals, particularly children, don't show obvious symptoms. Many staff are therefore fearful that they might be unknowingly bringing the virus home to their families.

Some reassurance would be offered through easy access to weekly testing to screen for Covid-19 infection, regardless of whether an individual is showing symptoms. But testing has simply not been made widely available yet in this way.

The lack of regular testing isn't just a danger for staff. As independent SAGE experts have warned, "the impact of placing many children in one place could lead schools to become 'institutional amplifiers', if children without any symptoms go unnoticed until an adult becomes symptomatic".

With infection rates still too high, there is also too high a risk that the virus will be spread from schools into the wider community and back again.

“Test Four” calls for isolation protocols to be strictly followed when a case occurs.

DfE guidance just isn't good enough. It confirms that a child or adult showing symptoms should be sent home to isolate but says that the rest of the staff and pupils in their class should carry on as normal until a case is confirmed by a positive test result. But with the processing of test results taking days, by that time any infection could be widespread.

Unions must insist that, as a minimum, the whole class and its staff all immediately isolate until, hopefully, a negative result is returned, and the school as a whole should be closed for a precautionary deep clean.

If a positive result is reported by a child, parent or staff member, then there must be testing and closure of the whole school and reopening only when unions and parents consider it safe.

“Test Five” states that "vulnerable staff, and staff who live with vulnerable people, must work from home".

Too many schools are putting staff under pressure to work when they feel themselves, or their relatives, to be at risk.

Where schools refuse to allow staff to work from home, then this must not be left as an individual issue*. Unions as a whole must declare that this refusal means the school has failed to acceptably account for risk overall and the press and public alerted.

Communities on the march against racism need to know which local schools are refusing to protect Black Asian and Minority Ethnic staff who feel at risk.

*Update on "Test 5": In this evening's NEU call for secondary reps, there was discussion about how Section 44 doesn't only cover a danger to yourself - but to others too.
Section 44 (1) (e) extends the protection against detriment to "circumstances of danger which the employee reasonably believed to be serious and imminent, he (or she of course!) took (or proposed to take) appropriate steps to protect himself OR OTHER PERSONS from the danger".
So, for example, if your Head insists that staff who feel they are at greater risk come into school instead of being able to work from home, this does not have to be left as a concern only for those colleagues. It is a breach of NEU "Test Five" and means the school would be failing our overall checklist too.
The Union has issued model letters today to allow staff to express their support for colleagues at higher risk - such as Black colleagues - which hopefully can prove sufficient.
However, if it turns out that the only way to avert the serious danger to these colleagues is for other individuals to refuse to go into work in order to make sure the workplace does not open at all, then your Head needs to be made aware that Section 44 (1) (e) includes that right. 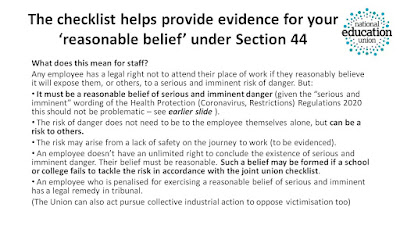