Denial of Covid transmission in schools must be challenged

The second Covid wave is accelerating globally. In the UK, infection rates in many areas are now at such high levels that the "R rate" is well above 1 so that the rate of increase continues to climb yet further.

Urgent action is needed to slash onward transmission but the response from the UK Government is only a confused and unfunded tiered lockdown that closes pubs but leaves schools and most workplaces open. It will leave affected workers in the worst-hit areas unable to pay their bills yet does little to convince anyone that it is actually seriously tackling viral transmission.

Even the Government's SAGE scientists seem unconvinced that Johnson's latest proposals are going to have the required effect. The SAGE minutes from 21st September warned that "the rate of increase in infections is expected to accelerate in the near future as the impact of school, college and university openings, and policy changes with respect to return to workplaces, and entertainment and leisure venues, filter through". Of course, that's exactly what has since taken place.

The main incidence of outbreaks is in schools

The latest figures from Public Health England (PHE) show that the main incidence of outbreaks is in educational settings and workplaces - not pubs! Figures from the previous week's Report also showed that, while college and university outbreaks are also significant, by far the largest numbers of confirmed clusters or outbreaks are in school settings: 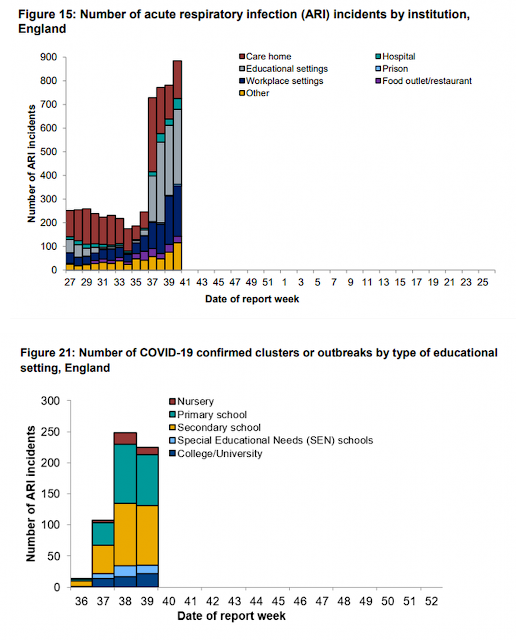 Just to emphasise that this isn't just a UK finding, Le Monde has similarly recently reported that the main incidence of outbreaks in France is also in educational settings.

Teenagers and young adults have the highest test positivity

The PHE Reports, alongside a further set of figures from ONS, confirm that the highest test positivity rates are amongst 10-19 and 20-29 year-olds, not older people. 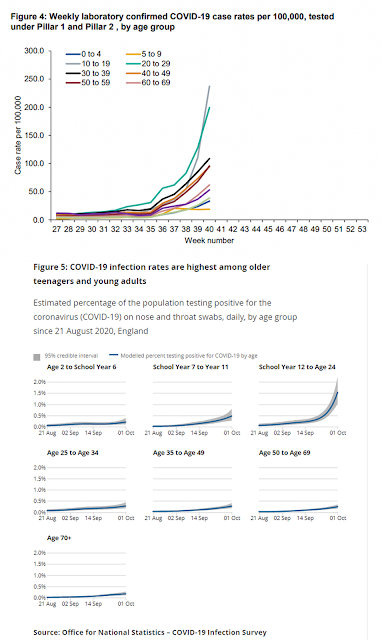 The ONS Report is clear in its conclusion that: "highest rates appear among older teenagers and young adults (school Year 12 to age 24), where rates have grown very rapidly in the most recent weeks. The second highest rates are seen in the secondary school age group (school Year 7 to school Year 11). Increases are also apparent across the other age groups, but to a much lesser extent"

This provides important confirmation that, while the elderly may be at the greatest risk of serious ill-health and death, it is young adults and teenagers that are likely to be the main source of viral transmission within communities.

With limited testing in the UK targeted to those who are symptomatic, this important finding was previously missed because most younger people show only mild or no obvious symptoms. It must no longer be ignored.

The National Education Union have produced a video where Kevin Courtney summarises these figures. It makes the point that PHE have stressed that viral airborne transmission risks are greatest in "poorly ventilated spaces if individuals are in the room for an extended period of time" - which, as Kevin correctly states, is a perfect description of our classrooms, where thirty or more individuals share one room for lessons.

Yet politicians, both Tory and Labour, alongside too many of their scientific advisers, seem to be in denial about the role of schools in viral transmission.

SAGE, in their latest published September minutes, advised (before the latest data had been released of course) that "it is still not clear to what extent (if any) schools magnify transmission in communities rather than reflect the prevalence within the community". Now, of course, high community rates will cause higher prevalence in schools, as more infected individuals introduce the virus into schools from their communities. But how can there be any scientific basis for suggesting that the virus won't then be further transmitted within packed classrooms and then back out into the community again?

If test positivity suggests some young people may well be carrying the virus, and they are sitting together in classes without social distancing, usually without masks, and generally with only limited ventilation, it's surely inevitable that schools WILL act as "institutional amplifiers" of the virus.

The PHE and ONS data above only adds to other global research that confirms that there is every reason to expect that the virus shows no respect for what kind of environment it finds itself within. Rather than reproduce it in full here, the threads updated by Dr Zoe Hyde on Twitter list medical research papers that have concluded that:

* Adults and children are equally likely to be infected;

Those findings are backed up by swab testing results that show:

* The amount of viral RNA detected in swabs from symptomatic children was similar to (or higher than) that of adults;

* Asymptomatic and symptomatic cases were also found to have a similar viral load.

For too long, subjective wishes for schools to stay open have outweighed the objective facts about what's needed to prevent the rising "second wave". For some politicians, that's driven by the cold economics of providing childcare for the UK workforce, for others a more genuine wish for children to carry on receiving an education.

But if rising infection rates continue to drive more school outbreaks and consequent self-isolation of staff and children alike, those wishes won't be met!

Time for unions to take action

Unless serious plans are put in place to provide safe learning in schools - not to mention safe working conditions for staff, especially those at higher risk that could be working at home providing distance learning instead - they will continue to drive the disastrous spread of Covid-19.

Existing steps being taken in schools, largely limited to leaking "bubbles" and extra cleaning, are just not sufficient. Alongside a properly functioning system of testing, the serious action required is to ensure schools operate only with smaller class sizes. That's the best way to minimise transmission and increase social distancing within the school environment, just as we had in place in the "first wave" of the virus from March.

But Boris Johnson's confused lockdown announcements, which failed to even mention educational settings, show that the time for just appealing to the Government to 'do the right thing' is long past. They're not listening.

The NEU now has to act to defend public health where the Government won't. Mass members' meetings on Zoom should be called in the lockdown areas, where the risks are greatest, and the case put that action ballots now need to be started to force the Government to act. The arguments - as in Kevin Courtney's video above - are clear, now what's needed is for the Union leaderships to give that lead.

Trade unions and local communities need to demand their voices are heard - because they know far better than the Conservative government what steps are really required. School communities should decide how best to operate priority rotas for children who need to attend school and how best to operate distance learning for those who can be supported at home.

Trade unions must use their collective strength to force the Government to take the action it should already have put in place, with extra funding to support online learning, additional staff and teaching spaces, a functioning test-and-trace system, and full pay for those who have to remain at home through workplace closure or to support children learning from home.