Once again, staff and parents have been angered at the way ONS statistics are being erroneously used, by politicians and press alike, to push for schools to fully reopen before it's safe to do so.

The figures under debate are statistics comparing Covid-19 related deaths by occupation, released by the Office for National Statistics on 25 January. One of its findings, according to the ONS, is that deaths of those working "as teaching and educational professionals, such as secondary school teachers, were not statistically significantly raised when compared with the rates seen in the population among those of the same age and sex".

But that conclusion, jumped on by the BBC and others as evidence of 'school safety' is not as straightforward a 'fact' as it might seem. It certainly doesn't seem to sit easily alongside other ONS data that consistently showed that infection rates amongst school-aged children were the highest of all age groups at the end of last year. Or are school staff somehow magically immune from infection and death?

Looking through the full statistical download from the ONS myself, even their headline figure of "139 deaths involving the coronavirus (COVID-19) in teaching and educational professionals aged 20 to 64 years" underestimates the overall loss of education staff.

Firstly, figures for support staff are left out. I have added in the categories I could find in the overall tables, although there may be additional numbers subsumed under other headings such as 'cleaners'. That sadly increases the total to 221 overall.

Secondly, the data excludes deaths to those who were aged 65 and over. Now, while these additional numbers may include school staff who have retired, it is also quite possible that some serving school staff are included in these figures too.

While, as a teacher, I understand the need to include all school staff in an analysis of education deaths, I make no claim to be a statistician. However, mathematician Sarah Rasmussen has also cast her critical eye over the ONS occupation data. As she points out in a revealing Twitter thread, to arrive at the right conclusion, you need to ask the right question - and you also need to be aware of the limitations and context of the dataset you are looking at.

Importantly, she points out that "60% of covid deaths in this survey are from 9 Mar - 25 May" - a period when, of course, most schools weren't fully open. The delay from infection to registration of death will also mean that deaths linked to the last weeks of term leading up to Xmas, when school infections were rising most sharply, are also excluded from the data. It probably excludes most deaths resulting from new variants too. So this is NOT a dataset that can be used to make conclusions about the safety of fully opening schools in Spring 2021.

Sarah Rasmussen also points out that, given the small numbers of staff counted in each subdivided category, reliable conclusions cannot be drawn from the ONS data. The ONS analysis itself stated that "it was only possible to calculate a reliable rate for secondary education teaching professionals", where they concluded that rates of death "were not significantly different than those of the same age and sex in the wider population". However Sarah also questions that conclusion too.

A fair comparison can't be made between different occupations over such a wide age group, without considering the specific make-up of each occupational group. School staff are largely female. Teachers, in particular, are also often young. Therefore, for the same rate of infection, fewer deaths might be expected than compared to a profession with an older male demographic.

Sarah Rasmussuen therefore argues that a better analysis of risk would be to compare the ratio of covid deaths to deaths by all causes for each occupation over the same time period. 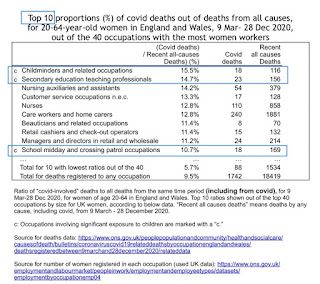 When that comparison is made using data for women , the grim ranking puts childminders first - but secondary school teachers second. This is also her finding when she ranks data using a measure called "Age Standardised Death Rates". 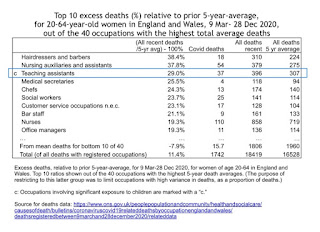 She also points out that, owing to a delayed rise in primary student infection, primary death counts may not have been so impacted until after the period that the ONS data covers. But school staff absence data shows that, in November and December, primary school teachers had nearly the same rates as secondary colleagues. Sadly, the resulting death rates are therefore also likely to be similar too.

Either way, these are very different conclusions to those drawn by the ONS.

No justification for fully opening schools

Sarah Rasmussen's analysis confirms that the ONS occupation comparisons data gives no justification for arguing that it is safe to now push ahead with fully opening schools.

For a start, the data is based on a period when schools were largely only partially open. Her analysis also shows that the conclusions drawn by the ONS on the risks to school staff are highly debatable.

But, of course, the NEU's insistence on school and college safety isn't just about our members, it's about the communities that we serve. Yes, fully opening schools while infection rates are still so high would result in further staff deaths but it would also result in many more infections and deaths in the wider community too. The growing concerns over 'Long Covid' will be an additional concern for staff and parents alike. 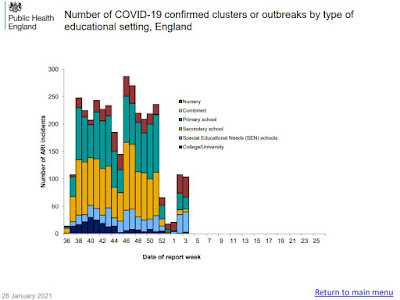 Just to take one last piece of data, politicians should study the data being provided by Public Health England on Covid outbreaks that are still ongoing in school settings. Yes, thanks to the U-turn forced on the Government by the NEU's insistence that our members would not return to unsafe workplaces, the numbers of outbreaks in schools has thankfully declined. But look more carefully. In SEN and Nursery settings - the places where Headteachers are being put under immense pressure to remain open to as many students as possible, the numbers of outbreaks are rising.

If schools are fully opened now, this will be the dangerous outcome across all settings. Once again, schools will act as the "vectors for transmission" that even the Prime Minister acknowledged had occurred with the new variant.

So let's insist politicians draw the right conclusion - keep school numbers at a safe level and keep our schools and communities safe.