Even just relying on SAGE advice - a mass return is unsafe

When Boris Johnson was making his announcement of a reckless 'big-bang' full return in all schools in England last Monday, he made a passing reference to the scientific evidence from SAGE that was being posted on the Government website.

As the evening went on, a long list of SAGE minutes and accompanying research began to appear on a page titled "Scientific evidence supporting the government response to coronavirus". But, when I started to read it, I realised it did nothing of the sort - it leaned clearly towards a phased opening instead! 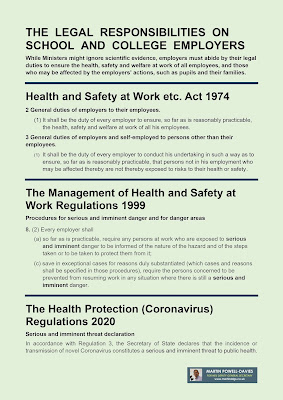 So, even though I have posted elsewhere about the even stronger advice on wider school opening from Independent SAGE, in this post, which can also be downloaded as a document, I will solely rely on the official Government SAGE evidence.

NEU reps and members should use this SAGE advice to explain to their employer why they must abide by NEU checklists if they are to meet their legal duties to protect the health and safety of both staff and also pupils, parents and others affected by their actions.

Use Collective Action if needed to apply the NEU Checklist

* "a staggered approach which does not increase local transmission rates, allowing schools to adopt phased returns and flexible rota systems";

* a "risk assessment process [that has] considered all the areas identified in DfE and joint union advice, fully evaluated the risk of harm, including local prevalence and identified the measures to apply in each area"

Some of the key issues that need to be considered are:

If these measures are not met, then NEU Executive policy, agreed on 24th February, states clearly that the Union will support branch officers, reps and members to:

* "support workplace groups, employer groups and LA branches in using collective action to seek a staggered reopening, based on local case rates and the scientific advice" 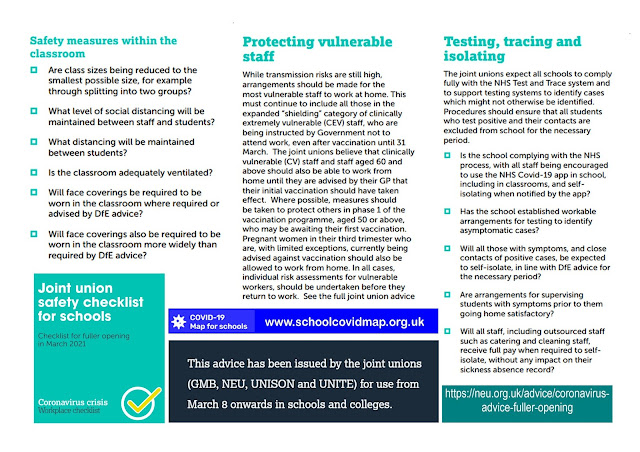 The evidence to the Children's Task and Finish Group on 17 December concluded that: 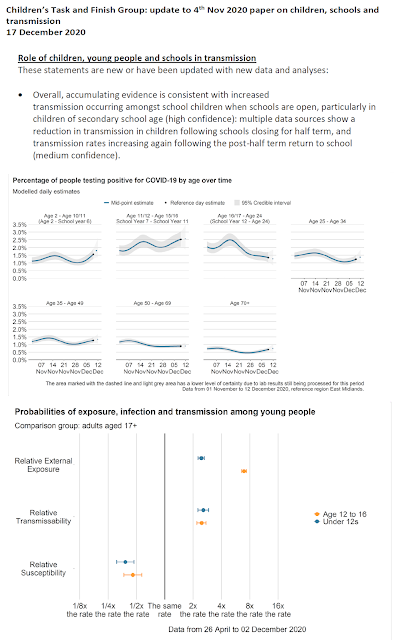 The ONS Infection Survey modelling for December, when schools were fully open, and new variants on the rise, also showed that school aged children showed the highest positivity rates of all age groups.

On 18 December 2020, SAGE issued a "plain language summary" of their advice on ventilation, originally issued in October 2020.

The subtitles below are mine but the quotes from SAGE:

a) 2m distancing is not sufficient to stop transmission

"The virus that causes COVID-19 is spread through very small aerosols and droplets released in exhaled breath. There is evidence to show that in some cases these aerosols can be carried more than 2m in the air and could cause infection if they are inhaled. This is most likely to happen in indoor environments when the ventilation in a room is poor".

"If people spend sufficient longer periods of time in the room, the virus can build up in air and people can inhale enough of it to cause infection. The risk appears to increase when people are performing activities such as loud talking that may cause them to breathe out more aerosols".

c) The risk will be higher if face coverings are not being worn:

"The risk is also likely to be higher in places where face coverings or masks are not worn, as these reduce the amount of virus that is emitted into the air".

d) Ventilation must be an important part of a risk assessment

"The ventilation in workplace or public spaces should be considered as an important part of the COVID risk assessment".

More information can be found on the NEU website. The NEU advises that risk assessments should:

* Identify any rooms which present a greater hazard either because they are smaller but contain the same number of pupils as larger classrooms, or because there are other factors preventing ventilation, and seek to agree that these are only used by smaller groups, or not at all.

e) Windows need to be open and breaks taken in lessons

"In workplaces that rely on natural ventilation it is important to keep vents open and regularly open windows especially in spaces that are shared with other people. Opening windows (and sometimes doors as well) intermittently, for example for 10 minutes every hour, can be effective at reducing the risk from virus in the air. If this is combined with a break where occupants leave the room (e.g. in meeting rooms or classrooms) this is even more effective".

f) To assess risk, carbon dioxide meters should be used

"It is very difficult to accurately measure ventilation, but in some spaces it is possible to use carbon dioxide (CO2) meters to estimate the effectiveness of the ventilation".

More information can be found on the NEU website. The NEU advises that CO2 monitors should be available so that measurements can be taken in all working areas and that:

* Carbon dioxide levels in a relatively well-ventilated room should be at 600 – 800 parts per million (ppm).  Over 1,500 ppm indicates very poor ventilation and action is needed. Where this is the case action can then be taken, whether opening a window/more windows, or reducing the number of people in the room

The federal "Centers for Disease Control and Prevention" has also just released guidance on ventilation for US schools here.

In January, the 78th meeting of SAGE specifically reported on the "Impact of School Reopening"

Again, the subtitles are mine but the quotes are from SAGE: 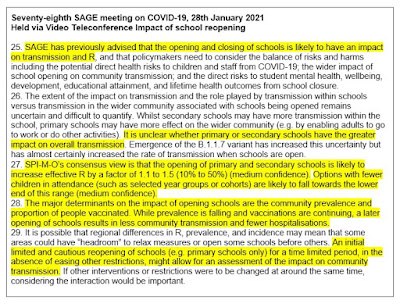 a) Children ARE susceptible to infection

“Evidence continues to confirm that children are susceptible to COVID-19 infection, with primary aged children having lower susceptibility of infection than older children"

"Emergence of the B.1.1.7 variant has almost certainly increased the rate of transmission when schools are open".

"There are significant benefits to reducing and delaying the spread of new variants. The most effective way to reduce the likelihood of new variants emerging in the first place is to reduce overall prevalence to the lowest possible level". (from SAGE 79)

"SPI-M-O’s consensus view is that the opening of primary and secondary schools is likely to increase effective R by a factor of 1.1 to 1.5 (10% to 50%). Options with fewer children in attendance (such as selected year groups or cohorts) are likely to fall towards the lower end of this range".

"An initial limited and cautious reopening of schools (e.g. primary schools only) for a time limited period, in the absence of easing other restrictions, might allow for an assessment of the impact on community transmission".

"The major determinants on the impact of opening schools are the community prevalence and proportion of people vaccinated. While prevalence is falling and vaccinations are continuing, a later opening of schools results in less community transmission and fewer hospitalisations".

"The impact on infections, hospitalisations and deaths is smaller if measures are released when prevalence is lower and if changes are made gradually. Relaxing measures later therefore has two benefits; it allows prevalence to be brought down further, and also allows more people to be vaccinated before R increases. The combined effect of these means a significantly smaller resurgence" (from SAGE 79).

g) Opening decisions should be based on local infection rates

"It is possible that regional differences in R, prevalence, and incidence may mean that some areas could have “headroom” to relax measures or open some schools before others"

The 79th meeting of SAGE on 4 February considered a ONS research paper that pointed out that:

a) A worrying proportion of people are reporting "Long Covid"

"22% of respondents were still reporting at least one symptom at 5 weeks following COVID-19 infection, while 9.8% had symptoms at 12 weeks".

"We estimate that during the week commencing 27 December 2020, 301,000 people in private households in England were living with symptoms that had persisted for between 5 and 12 weeks"

b) Long Covid is a risk for both staff and students

The 80th meeting of SAGE reported that:

a) Occupational risk is higher in environments like schools

"Evidence shows that people who work in some specific occupations and roles have increased risk of being infected, hospitalised or dying prematurely. This is higher in many occupations where people have to attend a workplace compared with people in occupations who can work from home. Occupations which involve a higher degree of physical proximity to others tend to have higher COVID-19 mortality rates"

b) Some communities may be at greater risk

"There is ethnicity-specific variation in testing, with children from minority ethnic groups having lower uptake of testing and being more likely to test positive than those from White population groups. Whilst rates are very low, Asian children were more likely to be admitted to hospital and intensive care for COVID-19 than White children and Black and Mixed/other children are more likely to have had longer hospital admissions"

The 80th meeting of SAGE also considered a technical report which pointed out that:

"[Our] consensus view is that the opening of primary and secondary schools is likely to increase effective R by a factor of 1.1 to 1.5 (10% to 50%). One modelling group has explored this further: 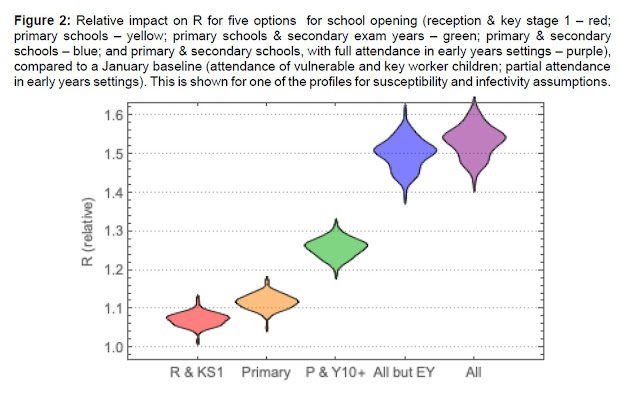 b) A 'big-bang' return compounds the impact of mixing pupils

"The largest relative difference arises from the return of non-exam years secondary pupils (the green to blue step in Figure 2). Rather than this group being key for transmission per se, this largely results from compounding the impact from other groups of pupils who have already returned"

The 81st - and last SAGE meeting before Boris Johnson pressed ahead with his 'big-bang' full return - discussed some detailed modelling of different scenarios for ending 'lockdown':

"All scenarios show an epidemic resurgence which results in a substantial number of hospital admissions and deaths, though there are differences in the scale and timing" 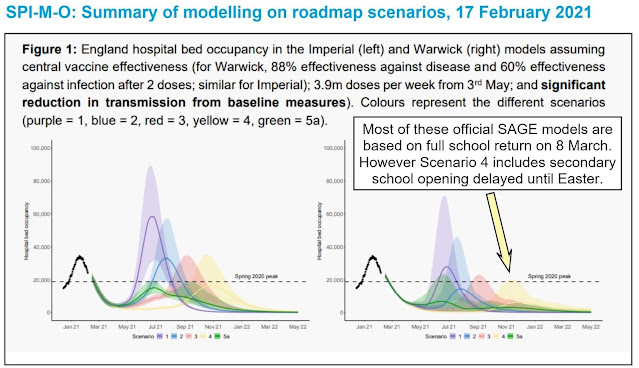 "There remain small areas where the number of new infections is not declining. As previously advised, these areas may be at higher risk when nonpharmaceutical interventions are relaxed, especially if they do not have high levels of vaccine coverage including in the most vulnerable groups"

"Given the level of uncertainty, decisions about changes to restrictions are best made based on epidemiological data rather than based on predetermined dates"

e) We need to get infection rates down further first

"Maintaining control of the epidemic is easier at low levels of prevalence than at high  levels because it gives more time to respond to increases before healthcare systems are overwhelmed; allows test, trace and isolate systems to operate more effectively; reduces the likelihood of needing to make unplanned interventions; and reduces the likelihood of new variants emerging"

The SAGE modelling warns Ministers - and us - that vaccination alone is not going to prevent  a further resurgence of infections once schools open, alongside the loosening of  other lockdown measures:

"Only around 79% of the population are adults, so even if coverage amongst them is 79%, only 62% of the population would be vaccinated. As the vaccines do not completely prevent transmission, the reduction in transmission that results would be expected to be lower than 62%. As a result, herd immunity is not likely to be reached in these scenarios without a further resurgence of transmission"

b) When transmission is high, a variant is more likely to evolve that vaccines may not be effective upon

"These models assume that the effectiveness of vaccines will remain high. Emergence of vaccine escape mutants would lead to decreasing efficacy. Whilst new vaccines can be developed, this will take many months".