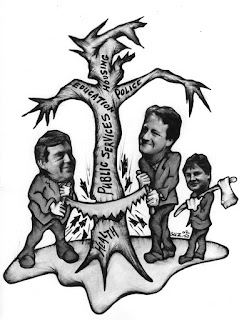 The government has promised £1.2 trillion to bail out the banking system. That is more than ten times the UK's annual spending on health. RBS, which is 84% owned by the taxpayer, is paying out £1.3 billion in bonuses. So why is that education and other council services have to pay the price? Like many Authorities, my own local Lewisham Council announced this week that they may need to make cuts of up to £70 millionover the next 3-5 years, due to what they describe as 'difficult times'. We need to prepare united action to defend our jobs, pay and pensions - and children's education.
Posted by Martin at 16:34