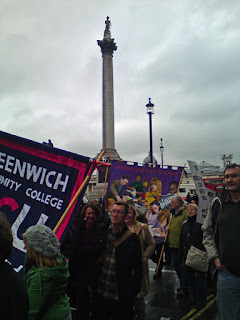 The National Union banner on today's march against cuts in Higher and Further education.

£2.5 billion of cuts to Higher Education are planned - out of a total budget of £12 million. These proposed cuts mean that many courses and colleges will struggle to survive. It also means the squandering of the potential of many thousands of school leavers who will not be able to find a college place.

Reports from those on the march who had been up early to join the BA pickets at Heathrow also reported the strength of feeling of UNITE/BASSA members there.
Posted by Martin at 18:14