Europe on the march! 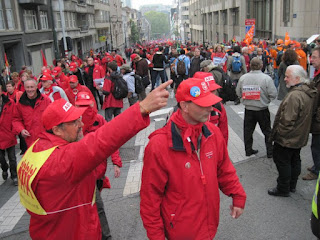 I was privileged to be able to be part of the NUT's delegation to the all-European march against austerity in Brussels last week.

It was a fantastic feeling to be part of a 100,000-plus demonstration of trade unionists from across Europe - Romanian police officers, Hungarian military officers, masses of French and Belgian unions in their union colours, RMT flags and other British union banners ... 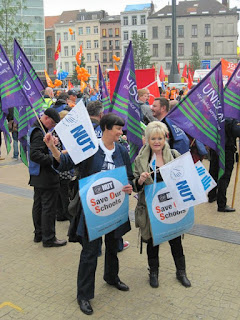 Now we have to build for a mass demonstration next year in London - as a preparation for united strike action against cuts and attacks on our pensions and public services.

The London demonstration on October 23rd is a step on the way to building that united response - I hope to see you there! 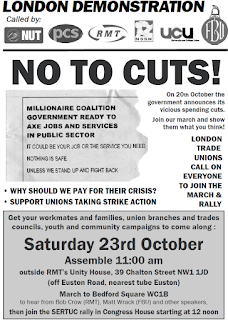 LONDON 'STOP THE CUTS' DEMONSTRATION - supported by NUT, UCU, PCS, RMT, FBU, NSSN and campaign groups across London:
Assemble outside RMT's Unity House at 11am,
March to Bedford Square, WC1 - speakers include Bob Crow (RMT) and Matt Wrack (FBU)
- move on to SERTUC rally in Congress House from midday
Posted by Martin at 10:39