The Con-Dems have confirmed that the number of places on degree courses in England will be cut by 10,000 by 2012. 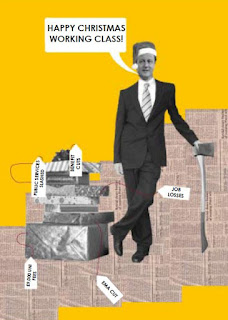 They have also confirmed further cuts to the teaching grant to universities by 2012, leaving universities to balance the books through cuts, attacks on staff  pay and pensions and through increased tuition fees.

Meanwhile, the supposed ‘U-turn’ on school sports turns out to be, at best, a shoddy attempt to save face and pretend that they are backing the ‘Olympic Legacy’. As the NUT have said “The ‘further’ £65 million announced today will be spread over three financial years and falls far short of the £162 million annual ring-fenced funding needed to continue the School Sports Partnership at current levels”. Mind, the fact that even this extra funding was found is an indication that the Government feels under pressure from the growing anger against their education and public sector cuts.

Meanwhile, what are these cuts achieving? Inflation is up and growth down. It isn’t just the snow that is keeping people out of the shops as their living standards fall and jobs are lost.

Last week, the Institute for Fiscal Studies tore apart Coalition arguments for cutting the Educational Maintenance Allowance. Their research pointed out that the costs of providing EMA would be outweighed by the higher wages - and taxes - that its recipients would go to enjoy in future. Of course, as they aren't thinking about building a decent future for all but just short-term profits for their financial friends - then this isn't going to interest the Con-Dems. No, it's the language of strikes and struggle that will make them listen.

Let’s have a good rest over Christmas and get ready for a renewed struggle in the New Year: January 15 is planned for local days of action against the cuts in the SE Region - and then the National Shop Stewards Network Conference on January 22nd in London will be a great way to discuss how we build a national campaign to defeat cuts and defend jobs, services and pensions  in 2011!
Posted by Martin at 22:25