Save School Sports from cuts !

Several hundred school students and their teachers were out in Whitehall today to protest about the proposed cuts to the Schools Sports Partnership. 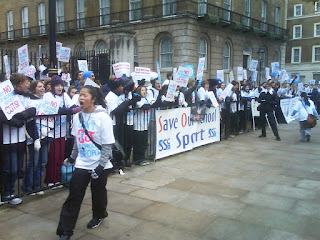 The SSP funding - costing only £162 million in total - helps finance school and student participation in sports programmes. Yet, while the Government pretends to be interested in the 'Olympic legacy', this funding is up for the chop. This hypocrisy has helped protesters to gather half a million signatures on their petition opposing the cuts in just a few weeks.

I was one of the NUT stewards at the lobby - but fellow stewards included a non-union PE teacher and a school police officer. However, all of us were there because of the deep anger against the effect of these cuts on young people. It was further proof that, while some people may at first go along with the argument at first that cuts are 'necessary' in general, once they see what specific cuts mean to their own lives, they can soon be out on the streets in protest. 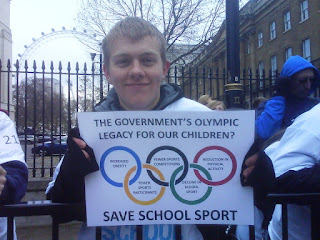 A PE teacher from Barcelona came up to take a photograph telling me, 'Olympics good but school sports better!'.  Things really started to liven up when London school students got all the youth chanting and then cheering as the delegation went in with the petition through the gates of Downing Street.

A few days ago, David Cameron seemed to be hinting that the Government might be considering a U-turn on the cut - but other reports suggest that these hopes will be dashed.

If the campaign succeeds, it will be a fillip to other anti-cuts campaigns. If it doesn't, the refusal will only fuel the growing anger against the Con-Dem's damaging cuts. Certainly, as with the protests against BSF cuts earlier in the year, today's example of teachers bringing their school students to a stewarded protest could set a useful precedent for the future.
Posted by Martin at 21:30