Don’t be fooled by Hutton – fight to defend your pension!

Lord Hutton’s second report into public sector pensions has confirmed the attacks that we have been expecting. He has recommended:
a) AN END TO FINAL SALARY PENSION SCHEMES – to be replaced by ‘career average’ schemes in order to cut the value of your pension.
b) RETIRING OLDER – the ‘normal pension age’ would rise first to 65 for all but increase further to 68 in future to track the rising state pension age.
This comes on top of the attacks we already know about, particularly:
c) PAYING MORE – with the Government wanting to increase pension contributions by 50% - robbing £100 a month or so from teachers just as we are about to be clobbered by a pay freeze and rising inflation.

Lord Hutton’s interview on Radio 4 this morning contained a series of distortions designed to confuse and divide opposition – we must not be fooled.

First, he claims that ‘there is no alternative’, that we’re all living longer and so we have to work longer to pay for it. Don’t be fooled. The financial statistics don’t back up their claims. As the NUT press release has stated: “The National Audit Office has confirmed that public sector pension costs are falling as expected due to the reforms already in place. Teachers are already paying more, the normal pension age has been raised to 65 for new entrants and employer contributions have been capped … Their plans are based on politics, not economics. Pensions have already been cut by changing their link from RPI to CPI inflation. As a result of this, next month’s pension increase will be 1.5% less than it should have been”

"Interesting tweet from Faisal Islam, Channel 4's economics editor, who's interested in the chart on page 23 of the report: "Hutton report table 1b shows that even in worst case scenario pensions costs/GDP will be LOWER in 2050 than now. Crisis?”

Second, he claims that public-sector workers can’t expect to carry on with final-salary pensions when most private-sector workers aren’t getting them. But why should we allow ourselves to be ripped-off in the same way as private companies are ripping-off their employees? The best way to defend all workers is for someone to put up a fight – and we are going to!

Lastly, as well as trying to divide public sector workers from private sector colleagues, he wants to divide classroom teachers from promoted colleagues by claiming that ‘career-average’ schemes will be ‘fairer’ to those lower down the scale. But what Hutton intends will be unfair to ALL of us.

He hasn’t made any recommendations on the technical details of the ‘accrual rates’ in any career-average scheme – and thereby hides the truth. In principle, a career-average scheme can be constructed in a way that maintains pension levels – but their aim is to cut pensions. These schemes will be constructed to give us LESS pension even though we'll be paying in MORE. There’s nothing ‘fair’ about Hutton’s proposals – they are just another part of this Government’s agenda of cuts and privatisation.


Telling point from Mark Serwotka in the Guardian: "Public sector pensions are being cut not because they are unaffordable or unsustainable but because there's a hole in the public finances. That hole was caused by the banking crisis and the recession that resulted. It was not caused by public spending, public sector workers or their pensions. As Mervyn King said earlier this week, "the price of this financial crisis is being borne by people who absolutely did not cause it" ".
Hutton did have to admit that there would have to be consultation and changes to legislation to bring in these changes. That means that we have a window – although it might be a short one – to organise the united action needed to stop these attacks.

Hutton’s report must be met with a quick response – a co-ordinated ballot across the public sector for strike action to defeat the pensions robbery.

Youth unemployment is rocketing but Hutton wants us to work until we're 68 - how does that makes sense? 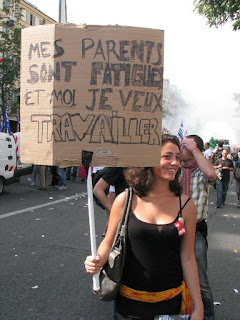