Half a million - and more - march against the cuts 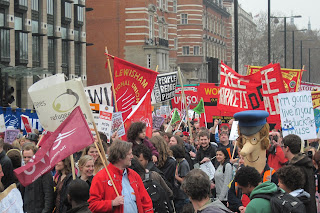 What a demonstration! The hundreds of thousands of protesters that flooded onto the Embankment came from right across Britain to show their anger against the cuts. 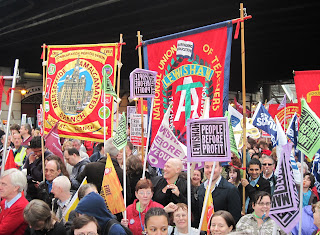 The demonstration was massive - estimates are of between half and three-quarters of a million. It certainly took Lewisham NUT five and a half hours to finally reach Hyde Park. We saw Birmingham NUT finally make it at 5pm - six hours after the start. 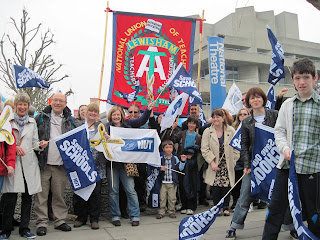 Up to 200 Lewisham NUT members followed the banner as we started out from the South Bank to cross Blackfriars Bridge and join the back of the demonstration. By 2pm we weren't much further than Embankment tube station - where the march had set out three hours earlier - and there were still many, many more marchers waiting behind us! 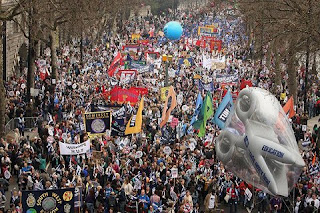 Text messages and calls from teachers who hadn't made it to the South Bank and chance meetings along the route shows that we may well have had as many as 300 Lewisham NUT members on the march altogether. 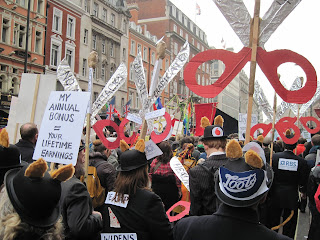 The last march of this size was the mass demonstration against the Iraq war - but this demo was different. It was a trade-union called event packed with thousands of trade union banners and flags. 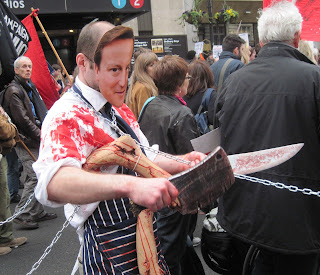 Now the urgent task is to harness the power of the movement - into co-ordinated strike action against the cuts to pensions, jobs and services!

Videos:
Mark Serwotka at the Hyde Park Rally - "Imagine what it would be like if we didn't only march together, we took strike action together" http://www.youtube.com/watch?v=6Ns_aksx1Cc
Christine Blower at Hyde Park: "We're going to stand together, march together - and, if necessary, strike together until we turn round these cuts"
http://www.youtube.com/watch?v=J9cCkz5GU74
Socialist Party - fantastic pictures showing the size of the demo - and a call for a public sector general strike to follow March 26 http://www.youtube.com/watch?v=vn4bOtDkW_0
There's even me being interviewed by Flemish TV about how a 'decent middle-class family' is being hit by the cuts!! Thanks to the local mums who backed me up on fighting library closures! http://www.deredactie.be/cm/vrtnieuws/mediatheek/programmas/journaal/2.14943/2.14944/1.989876 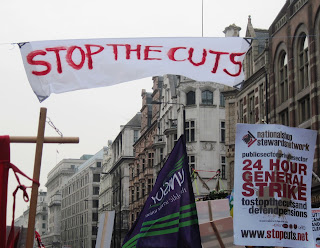 Please add me to the tally of members who ended up marching elsewhere - in my case, the Royal College of Midwives, Grandmothers against Greed and some very nice firemen. (Got stuck the wrong side of the river when they started closing the bridges.)
A truly memorable occasion!