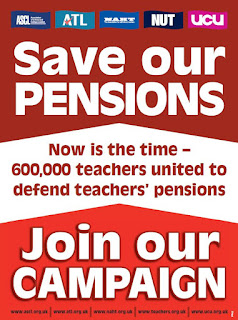 The latest reports from the Bank of England about falling growth and rising inflation only confirm what the NUT has been saying. Firstly, cuts don’t help the economy, they make things worse. Secondly,  a pay freeze combined with rising prices means another squeeze on our incomes.

That’s one more reason why NOW is the time to vote for  action to defeat the government’s plans to make every teacher pay in more - to end up with a worse pension!

Remember, these increased contributions aren’t going to help pay for retired colleagues’ pensions – but are just an extra ‘stealth tax’ to help bail out the Government’s deficit.

The ConDems have already budgeted for the £2.8 billion that they plan to rake in from this attack on public sector pensioners. They’re not offering any serious ‘negotiations’. All they want is for unions to decide amongst themselves who will be robbed the most – and how much less we’ll get in return through an inferior career-average scheme.

Strike action is needed to make them think again.

NUT Pensions Calculator spells it out

If any teachers are in doubt about what they stand to lose, make sure that they log on to the NUT Pensions Loss Calculator on the NUT website: http://www.teachers.org.uk/node/12872

What about holding your school NUT meeting in an ICT room so that staff can see for themselves?

The materials that will be circulated with the ballot papers will give real examples from teachers facing £100+ monthly pay cuts and showing the £100,000’s that will be stolen from their pensions over their  retirement if the Government gets away with their attacks.

These calculated losses are shocking enough. But news from the NUT Executive shows that, if anything, they are an underestimate of what we could lose.

More attacks coming – unless we act

With Hutton’s own figures confirming that the costs of public sector pensions are falling, the Government need to invent a reason for making us pay more into their     coffers. So they have announced a change to the ‘Discount Rate’ used to estimate the costs of our scheme. The details are complex but the intention is clear – to fiddle the figures to hike up our contributions.

The pensions loss calculator factors in the change from RPI to CPI and the proposed increase in retirement age. But the Con-Dems have another attack still to come. Hutton has also recommended a change from a final salary scheme to a career average scheme. This could make the attacks on our pensions  a whole lot worse.

For now, most teachers get a pension calculated on 1/80 of their final salary for each year of pensionable service.  So, if you manage to work for 40 years, you get a pension equal to half your final salary. Using a ‘career - average’ income would yield a lower pension – but that can be satisfactorily offset by using a higher ‘accrual rate’ than 1/80. For example, the Civil Service unions negotiated a career-average scheme that uses 1/43. But reports on the negotiations given to the NUT  Executive suggest that the Government has no intention of implementing anything as good as this. They may even try to make accrual rates worse. This wouldn’t just be pensions robbery, it would be assault and battery!

Be in no doubt, we are in for a serious struggle. June 30 needs to be a real show of strength. If the Government won’t back down, we need to be ready to go further and escalate our action next term with others, like the NAHT, then planning to join us in action too.

NOW is the time for action

The idea put forward by the NASUWT leadership that  unions should wait until negotiations are completed before unions start to ballot is, at best, naïve.  At worst, it risks allowing the Government to say unions are divided – when we need to show united opposition.

Fortunately, five other teacher, headteacher & lecturer  unions have agreed to issue the same united message – “now is the time to defend our pensions”.

But existing NASUWT members don’t have to wait for their union to finally ballot. If they sign a Direct Debit Form for NUT membership for 2012 they can join the NUT for free in 2011. Anyone joining the NUT right up to June 30 will be legally covered to join the strike action.

First of all we have to win the ballot - and the Executive heard that nearly 200 different reps briefings have been held over the last fortnight or so to build the campaign. However, we also have to look ahead and make plans for June 30 - planned as the first strike day. There will be a big march and rally in Central London with the route and venue now under discussion.

Striking teachers, lecturers and civil servants will be marching to defend their pensions. We hope other Londoners will also come and join us to show their opposition to the ConDem cuts too.
Posted by Martin at 13:33