I spoke today in Trafalgar Square at the rally organised to recall and protest against the brutal massacre of Tamils as the war in Sri Lanka reached an end two years ago. 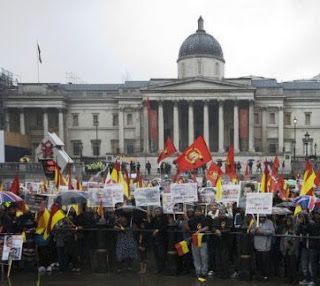 At the time, thousands of Tamils marched to publicise the crisis and to demand that the world's governments acted to stop the slaughter. I spoke at the protests in Parliament Square and brought the issue to the attention of the NUT Annual Conference.

Now, belatedly, a new UN Report confirms the horrific truth - of the murder of over 40,000 Tamils and the mass detention of 400 000 people.

As a teacher, I was shocked to read the UN Report listing the crimes against children, the complete breakdown of schooling, of horrific injuries, psychological trauma and acute malnutrition.

But, when Tamils protested in 2009 across the globe, the UN failed to act. Only now are they admitting what took place. Big business politicians have always put their own strategic interests ahead of the interests of the peoples of Sri Lanka.

The MPs who came to address the square from all three of the main UK political parties made promises to the crowds - but experience should warn the Tamil community about relying on capitalist politicians' promises.

Tamils, and all of us who support the right to self determination of the Tamil speaking people, must turn to our own organisations - and the organisations of working people - the trade unions - for genuine solidarity.

Just as Tamils marched in 2009, trade unions in Britain marched in 2011 against attacks on our jobs and services. We know the best way to make politicians listen is to take action, which is why we will also be on strike on June 30 to defend our pensions.

Those same attacks on working conditions are taking place in Sri Lanka through the proposed free trade zones. Trade union organisation will be vital to oppose the oppression and exploitation of Tamil youth and workers.

But the trade union movement in Britain also has a proud tradition of fighting injustice and oppression. It also has the strength to get its message out to millions across Britain. The message from the rally today - and the demands for a full independent enquiry into the massacres two years ago - must be taken up by trade unions here in Britain.

I pledge to take up that message within the NUT. But Tamil workers must also go to their union branches and speak up about the atrocities that took place. They should feel confident that they will get the support for their colleagues if they call for letters of protests and solidarity from their union branches.

Let's work together to make sure the truth is known - and to oppose poverty and oppression here and in Sri Lanka.
Posted by Martin at 08:54