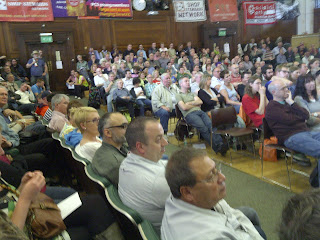 For a report of the NSSN rally and lobby of the TUC, visit http://www.socialistparty.org.uk/articles/12744/12-09-2011/nssn-calls-on-tuc-to-open-the-floodgates-of-mass-action

I must start by bringing the apologies of Nina Franklin, the NUT’s National President, who very much wanted to be at today’s Rally, but has had a pressing family commitment today.

I’m proud to speak in Nina’s place – and I’m certainly proud of the tens of thousands of NUT members who, on June 30, answered the Government’s attacks on our pensions with the argument that they can’t ignore –  co-ordinated strike action.
Those teachers will have returned from the summer break hoping for news that the Government has stepped back – but few will be too surprised to hear that the summer’s negotiations have been a sham. It seems that Ministers are determined to impose an artificial cost-ceiling on schemes that leaves no room for any genuine negotiation.
That’s because this Government is on a mission – on a mission to transfer wealth from working people to the rich, to cheapen the costs of pensions for the benefit of their big business friends that want to take over privatised schools and services.
But as the mass petition being launched by seven education unions makes clear, we completely reject the Government’s claim that our pensions are unaffordable and a drain on taxpayers.
No, who’s draining away our resources? – it’s those who wreck the economy and then expect us to bail them out, the big businesses who won’t pay their taxes and even have the cheek to object to the 50p tax rate – it’s certainly not the dedicated staff providing vital public services.
But today we are serving a warning on this Government – and calling on the TUC Congress next week to do the same. If you want to refuse to retreat – on your heads be it!
Because June 30 didn’t just raise the confidence of those who took strike action, it also raised the sights of millions more workers who wanted to know why they weren’t standing up for themselves too! It raised the pressure on every union leader that was still to declare for action to come on board as well – and that pressure is having an effect!
ATL and NUT are ready to act again. But, we already know that the UCAC teachers union in Wales is opening a ballot for action in September – so are the EiS in Scotland - and so are the NAHT Headteachers’ union.
Then, on Friday, we heard the welcome news from the Executive of the remaining classroom teachers’ union, the NASUWT, that they will also be balloting for action this term.
While we wait for those ballots to take place, those unions will also be working together to build a mass Lobby of Parliament on Wednesday October 26.
I hope that there will also be agreement that there will be a joint  demonstration before the Lobby so that trade unionists can march together to show that we are giving the Government one last chance – or we strike in November!
So urgent joint staff meetings need to be called in every school – yes to sign the petition but, above all, to convince colleagues in the NASUWT and other unions to vote for action.
Let’s hope that those ballots can include GMB, UNISON and UNITE. Because, if teaching unions are getting ready to strike together – then so should support staff colleagues too!
Of course, co-ordination between a range of unions is never straightforward – and strike action may have to be on a day later in November than first planned – but there must be no question of any further delay – and no excuse for any union to avoid co-ordinating action with others.
Let’s be clear, such a massive show of strength from public sector unions will raise the stakes on both sides. So, while we prepare for joint action in November, let’s also plan together for what comes next as well.
That’s why Friday’s NUT Executive didn’t just confirm our plan for the further day of co-ordinated strike action, we also agreed to consider plans for subsequent action, perhaps including rolling action involving every region.
This Government set out to wreck our pensions, wreck our services, ruin our children’s futures – but we can - and we must - force them back.
So let’s find those flags from June 30, dust off the banners, plan together for local joint rallies, levies and collections, leaflets and stalls. Above all, let’s plan together for united strike action – and let’s not step back until we win.
Posted by Martin at 09:00