Thousands of protesters gathered in Whitechapel, East London today to protest against a threatened rally by the far-right English Defence League. 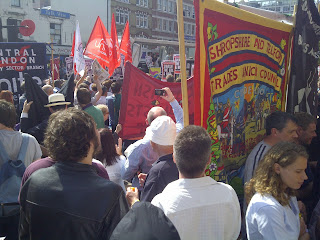 The EDL action was a deliberate provocation to try and stir up division in Tower Hamlets. The far-right has not been able to organise public activity in the borough since the morning when the BNP were driven out of the top of Brick Lane in 1993.

Now, with unemployment and poverty rising, there is again a risk that the EDL and BNP assist the billionaires in driving through their attacks by whipping up racism to divide opposition. But the protest today - and particularly the action taken by the RMT - shows that London trade unionists are not going to allow the Con-Dems nor the racists to divide us.

The RMT made clear that they were not going to compromise safety by transporting the EDL on tubes to Liverpool Street as they originally planned. The Guardian also reports today that "staff at King's Cross station closed the entrance to the tube, preventing the majority of the EDL supporters gathered outside from travelling to the demonstration around Aldgate East tube for around half an hour". http://www.guardian.co.uk/uk/2011/sep/03/english-defence-league-london-demonstration

Many protesters, locals and youth took copies of the NSSN leaflet I was distributing publicising next Sunday's Lobby of the TUC and calling on young people to 'get organised and link up with the unions'

One of the attacks on young people's chances is, of course, the cut to the EMA. An article in the TES by an East London Headteacher points out that  her school will now be given "a fifth of the money we got for EMA grants. If we award all those who were eligible last year they will get less than £5 a week".
http://www.tes.co.uk/article.aspx?storycode=6110547&s_cid=twtimes_paper_decisions

These kind of attacks will only be defeated by united mass action - not the divisive racism peddled by the English Defence League which only helps the Con-Dems get away with their cuts.