A rainy Wednesday was never going to be the easiest time to bring together NUT reps from across London, but tonight’s London Reps Meeting certainly proved worthwhile. 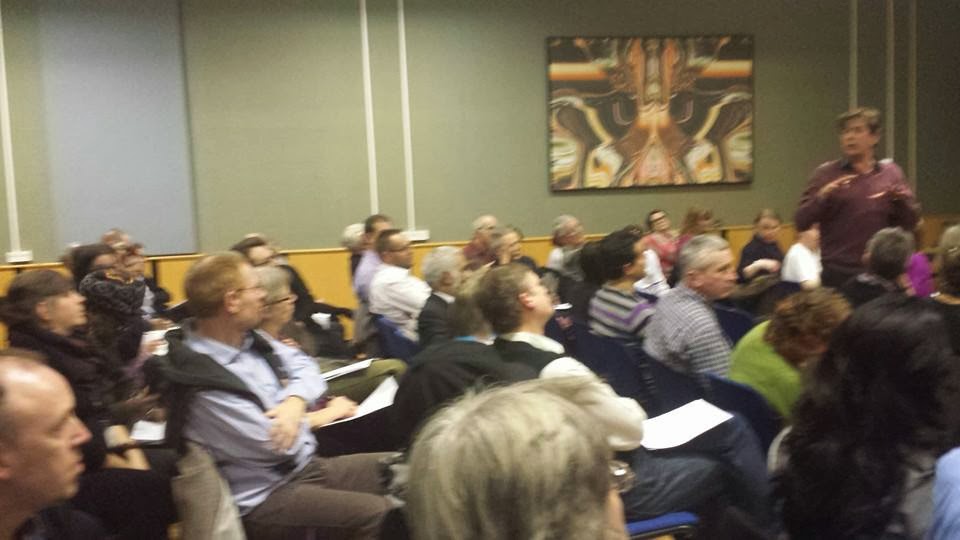 The meeting started with reports from individual disputes, starting with breaking news of an initial victory at STEM6 Free School in Islington. From a position where the school’s management had originally sought to refuse to even acknowledge the Union’s existence, the threat of strike action had led today to an agreement to union recognition and for meaningful negotiations to begin over teachers’ terms and conditions of employment.


Other reports included the solid strike action to oppose the worsening of teachers’ conditions at National Autistic Society schools, action against an unacceptable pay policy at Brampton Manor Primary in Bexley, the High Court victory over academisation at Warren School, and successes over changes to pay and appraisal policies both Lewisham and Greenwich.

Louise from Newham and James from Brent both spoke of the determination of their school NUT groups to win pay policies in line with Union checklists – but also how the confidence to take local action depended on teachers being sure that their Union was firm in taking national action too.

Jane from Islington spoke of the pressures on many young teachers to be able to afford to live in the capital and others stressed that the NUT needed to act against the pay cuts being imposed through the enforced increases in pension contributions. That’s one reason why, in my campaign to be re-elected to the NUT National Executive, I am calling for the Union to campaign for a £2,000 increase on all pay points, as well as defending annual progression for mainscale teachers. £2,000 still works out at only around a half of what many teachers have had stolen from them through the combined effects of the pension attacks and pay freeze. However, it is the kind of clear objective that we need to offer to teachers – to help  build an escalating campaign of strike action to stop Gove’s attacks.

Kevin Courtney, the NUT DGS, spoke to reassure reps that the NUT was determined to take action against Gove’s attacks and that the NUT Executive would be meeting to consider plans for further action tomorrow. That was welcomed but, given the continuing delay in making firm strike announcements, the mood from many of the reps who spoke was blunt. As one said, “Stop wasting time and name a date for strike action!” 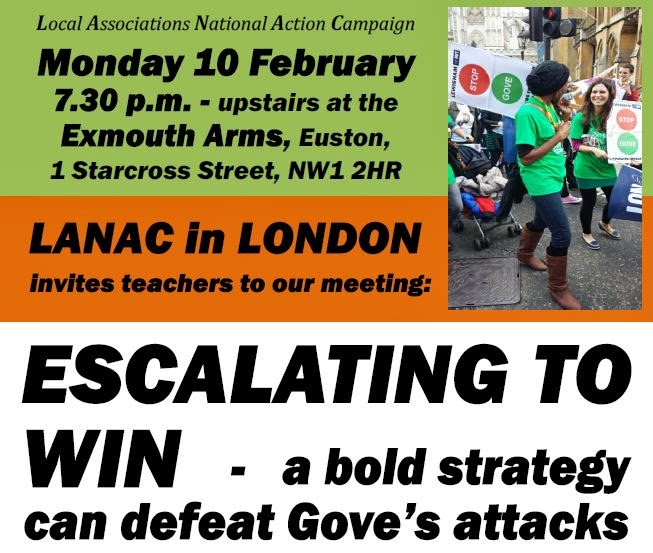 Leaflets were also distributed to build for a ‘LANAC in London’ meeting on Monday 10 February. As the leaflets state, “Now we need to build for action again - but not just for another isolated strike day. If we are to stop Gove, LANAC believes we need a clear calendar of national action, escalating from one to two-day action - and warning Gove that more could follow. LANAC also wants to make sure that, in the NUT elections this year, we elect a leadership that will enact such a bold strategy”.
Posted by Martin at 23:11