Motions now out for next week's LANAC Conference

As promised, motions for discussion at next Saturday's LANAC Conference - and open to amendment - have been publicised on the LANAC website http://www.nutlan.org.uk/?q=node/57227. 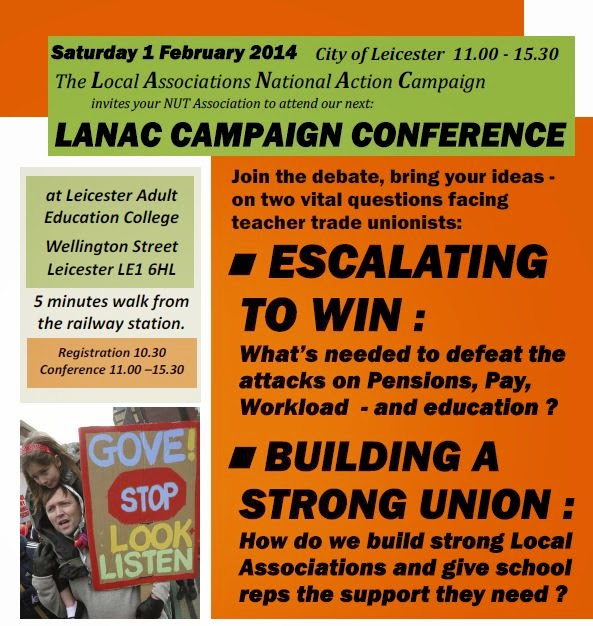 As LANAC Convenor, I already know of a good geographical spread of NUT Associations who will be represented on Saturday. Just this afternoon, both Gravesham and Barking & Dagenham NUT reported to me at today's AAA AGM that they will be attending the LANAC Conference too!

The meeting is on Saturday, February 1st, from 11am at  Leicester Adult Education College, Wellington Street Leicester LE1 6HL. It will be a vital Conference to discuss the plans to build a clear strategy to defeat Gove's attacks on pay, pensions and conditions.

We will be meeting right after the next NUT National Executive meeting on Thursday.  Let's hope that, after that NEC, we will then have a firm date for the next strike action that we can build for. However, LANAC has consistently argued that the decisions shouldn’t just be about the next action date but should also map out a calendar of action that can show both Michael Gove and our members that we have a serious strategy to defeat these attacks.

Four different motions are published on the LANAC website, but this is the motion entitled 'Escalation to Win':


LANAC:
1)    Restates our determination to do everything we can to build the strongest possible action to defeat the attacks on teachers pay, pensions and conditions.
2)    Congratulates the NUT and NASUWT members who strongly supported the regional strike actions in June and October 2013 and urges teachers to build the further campaign of action necessary if we are to reverse the attacks we face.
3)    Recognises that confidence built through those regional strikes may have been damaged by the postponement of the strike action promised, firstly, in November, and then by the further delay beyond the announced deadline of February 13.
4)    Congratulates those members of the NUT National Executive who opposed those delays and called for the NUT action to proceed, with the NUT continuing to invite the NASUWT to reconsider their opposition and continue joint strike action.
5)    Recognises the advantages of joint action but also the dangers in allowing the outlook of another union’s leadership to set the agenda for the campaign. LANAC calls on NASUWT members to demand their Union takes joint action with the NUT.
6)    Believes that it was a mistake for the Unions to claim that they has won an offer of ‘genuine dialogue’ with Michael Gove when he had consistently made clear that he had no intention of offering genuine talks to try and resolve our dispute.
7)    Believes that to build firm support for action, and to answer any confusion that the delays and mistaken claims of ‘talks’ may have created, it is now even more important for the NUT to demonstrate to members – and to the Government – that it is implementing an action strategy that is strong enough to force Gove into genuine negotiations and for the Government to retreat from its attacks.
8)    Calls for the NUT to adopt a strategy that includes:


d)     Co-ordinating action with other unions, including, if they are willing, the NASUWT

9)    Calls on the NUT to promote much clearer objectives for the campaign so that teachers know the goals that we are aiming to achieve through taking action.
10) Finally, recognising the urgent need for wider debate about the Union’s strategy, and the support that was shown for the candidate supported by LANAC for NUT Vice-President, LANAC agrees to also back candidates in the NUT General Secretary and Deputy General Secretary elections and to call on NUT Local Associations to nominate those candidates and to campaign in their support
Posted by Martin at 22:37

Email ThisBlogThis!Share to TwitterShare to FacebookShare to Pinterest
Labels: LANAC