NUT General Secretary - should there be a contested election this June?


In June of this year, elections are due to take place to decide the next General Secretary of the NUT. 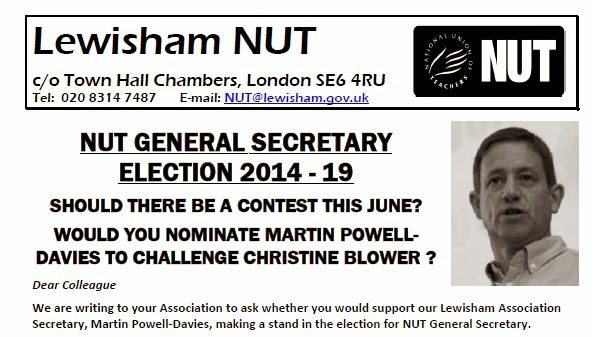 Up until now, only one candidate, Christine Blower, the existing General Secretary, had written to Local Associations requesting nomination. Unless another candidate receives the required ten nominations, then there will be no election in June and Christine will automatically continue in post as GS.

A decision by anyone else to stand in the General Secretary election is certainly not one to be taken lightly. The next GS will have the significant responsibility of leading the NUT for the next five years at a time when teachers will continue to face an unprecedented battle to defend their livelihoods, children’s education, and, indeed, to protect the organisation of the Union itself. Standing in the election, especially for anyone with classroom teaching duties, takes commitment and energy and cannot be undertaken without support.


However, at last week's packed Lewisham NUT General Meeting, as part of an angry debate on the continuing delay in calling national strike action, NUT members concluded that there needs to be a contested election because:
That's why it was agreed that Lewisham NUT Officers should immediately write to a number of NUT Associations, asking them to indicate whether they agree that there should be a contested GS election this June - and also, if so, whether they would nominate me to be a candidate.

As the letter stated "we understand that there aren’t many members with a national profile that would want to make such a stand. However, Martin Powell-Davies has agreed that he would be willing to stand in this election, as long as there are enough Associations willing to nominate him and work to support his election".

Initial feedback from the letter has been positive. In fact, I am awaiting confirmation that one London NUT Association has already voted to nominate me to stand. Other Associations have made contact offering support and inviting me to attend hustings meetings.

Ten years ago, in 2004, I stood in another NUT GS election as "A Teachers' Leader on a Teacher's Salary', a pledge that I am certainly willing to stand by again. Although very much an 'outsider' in that election, won by the late Steve Sinnott, my campaign succeeded, at least in part, in doing what it had set out to do – to sharpen the debate within the Union and to enthuse teachers to take note of an election that would otherwise not have voted at all.

Looking back at my campaign leaflets in the 2004 GS election, the demands made ten years ago still hold true today:
- an end to excessive workload,
- for the right to retire on a full pension at 60
- a serious campaign to end league tables
- action to oppose performance-related pay
- teacher unity in action against 'teaching on the cheap'
Those demands are still vital - but none of them have been met. That's why we need a real debate in the Union about how we can turn the tide in favour of teachers and education after a decade and more of relentless attacks.

Nominations for the GS election close on 30 April and so, if a stand is to be made, a decision has to be made soon. The LANAC Conference on Saturday in Leicester will be meeting to debate  the strategy we need – including whether LANAC-supporting Associations would back a challenge in the GS election. If enough Associations want me to make a stand, then, with their backing, I will do so.
Posted by Martin at 19:55

Email ThisBlogThis!Share to TwitterShare to FacebookShare to Pinterest
Labels: GS2014