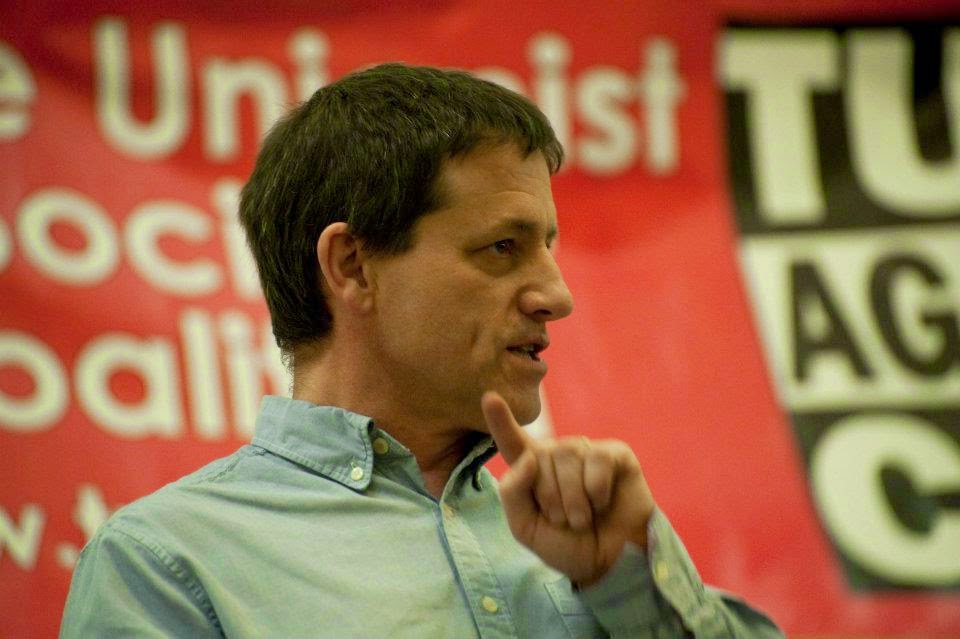 In response to the news that the Council has ignored overwhelming opposition and gone ahead with its application for an IEB at Sedgehill School, Martin Powell-Davies, Lewisham NUT secretary, Sedgehill School parent and one of the driving forces behind the Stop Academies in Lewisham (SAiL) campaign has announced his intention to stand in next year's General Election.

Friday 12th December saw 400 students, parents, teachers and members of the community protest at Lewisham Town Hall against the threats to Sedgehill School, Bellingham. Through petitions, emails and letters, the Sedgehill School community answered the distortions being put out by the Council and explained why the IEB would damage education for Sedgehill students.

Disgracefully, it has now been confirmed that the Director of Education has gone ahead with submitting an application to the Secretary of State for the Interim Executive Board.

In response to this news, Martin said:

"Anyone who knows Sedgehill, knows it is not a failing school. As a parent of four children who have been so well-supported by Sedgehill staff, I am angered that a Labour Council should risk children’s education by imposing their plans against the wishes of the whole school community”.

“ Their unjustified actions could become the first step in the complete break-up of local authority schooling across Lewisham – just as we have seen take place across Bromley. It’s part of a wider agenda to cut Council services at the expense of our communities. It’s an agenda that has to be challenged”.

“I am not going to stand by and see the pro-privatisation policies that now dominate the New Labour machine ruining education. Voters should not be left to choose only between different pro-Academy, pro-Austerity politicians who differ only on the details of the cuts they plan to make. That is why I see no alternative but to put my name forward to the local Trade Unionist and Socialist Coalition steering committee and mount a challenge to those parties in May's General Election."

"Today’s IEB submission confirms, once again, how little there is to choose between the main parties. They all offer a diet of cuts, austerity and privatisation. Yet, we saw with the Lewisham Hospital campaign and now with SAiL that there is mounting opposition to these damaging policies. Now we need candidates that will speak out and lead campaigns against the attacks on education, health and all our public services. I think that I can provide that voice in the Lewisham West and Penge constituency in May's election."

The Trade Unionist and Socialist Coalition (TUSC) was set up in 2010, co-founded by the late RMT union leader Bob Crow, to provide a clear left-wing, trade-union based alternative to the main parties’ policies of public sector cuts, privatisation, poverty and environmental degradation. TUSC calls on trade unions to break from Labour and to launch independent political representation for working people. More information can be found at www.tusc.org.uk, including this video appeal from Dave Nellist, TUSC National Chair, formerly a Labour MP from 1983 to1992: http://youtu.be/H0mq1l_PHq8

In the 2015 General Election, TUSC will be standing candidates in over a hundred constituencies across England and Wales. Our candidates won’t be professional politicians but leading trade unionists and community campaigners, just like Martin. 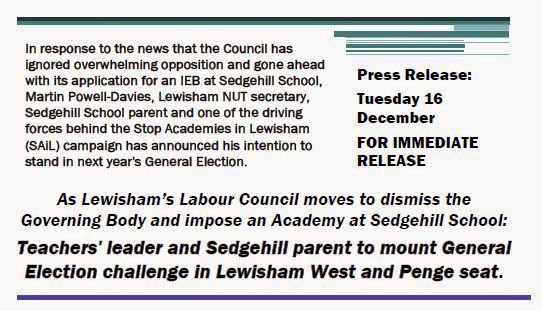 Please get in touch if you want to help the campaign.

I have been a member of the Labour Party (off and on!) since 1976, but I am disgusted by the actions of Lewisham's so-called "Labour" council concerning the "privatisation" of Sedgehill School.
Like Martin, I have a son at the school and each and every parent I know is proud that our children attend such a balanced and well-run school. Mr McKenzie, the staff, and governors of Sedgehill deserved the support of Lewisham Council, not their abandonment in the week before Christmas.
If I was a voter in Lewisham West & Penge, I would vote for Martin as an alternative to the neo-Tory policies of New Labour.