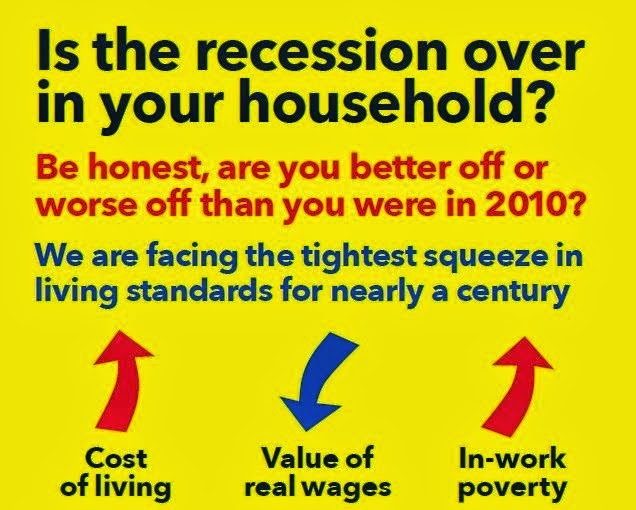 As Chair of the SERTUC Public Services Committee, I've been drafting a campaign leaflet around the issue of low pay and austerity, for use particularly in the months up to the General Election. The text below is just a first draft for discussion by the SERTUC PSC Officers but, using wording information taken from TUC and TUCG materials, hopefully sets out the trade union case for why 'Britain Needs A Pay Rise':

David Cameron and George Osborne are boasting about ‘economic recovery’ but have you noticed your household getting any better-off?

Yes, in unequal Britain, a wealthy handful are doing very nicely. The average pay of a FTSE company boss works out at well over £1,000 per hour.  The 1,000 wealthiest Britons increased their collective wealth by £70 billion in the last year alone. That’s enough to give every working person in the UK a £2,000 pay rise.

In contrast, for most workers the real value of the pay that we take home has been falling in real terms for well over a decade. The average full-time wage is now worth over £2,500 less than when this coalition government came to power – that’s about £50 a week.

Public sector pay has been deliberately capped beneath inflation. Divisive performance-pay schemes imposed in schools and other public services are also being used to drive down wages, forcing colleagues to compete with each other for pay increases.

Over 5 million workers are struggling to survive on rates of pay lower than the Living Wage, an independently-set figure calculating the very minimum needed to afford a basic standard of living. Even ‘Living Wage’ levels of pay, presently set at £7.85 an hour, or £9.15 an hour in London, are still hard to live on! That’s why the 2014 TUC Congress voted to campaign for a minimum wage of £10 an hour for all workers.

For those on benefits, or having to rely on ‘zero-hours’ contracts and other casualised work , things are even harder.  Small wonder that the numbers of people forced to use ‘food banks’ is rocketing.

Austerity isn’t working
If current austerity policies continue under the next government, things aren’t going to get any better. The Office for Budgetary Responsibility has forecast that economic growth will weaken before the vast majority of workers have seen any real benefit. The deep and rapid cuts set to follow the General Election will also help make sure that any recovery is short-lived.
Far from solving economic difficulties, cuts in wages have been part of the problem.

Low pay leads to low consumer demand. This has led to a spiral of decline. Getting money back into people pockets is essential to securing a strong recovery.

Instead of further recessionary cutbacks, increasing public sector pay in real terms and raising the minimum wage could stimulate demand and economic growth.

Who will tackle the cost of living crisis?

Britain needs a pay rise. Britain needs a government that will tackle the cost of living crisis. So, in this General Election year, ask candidates where they stand on these TUC Congress policies: