The announcement late on Friday from the Chair of Governors of the Leathersellers’ Federation of Schools that “the DfE are going to rescind the Academy Order in respect of Prendergast School” is an unexpected blow to the Governors’ plans to proceed to vote for a Multi-Academy Trust (MAT) of all three Federation schools - Prendergast (aka Hilly Fields), Prendergast Vale and Prendergast Ladywell - when they meet on June 17. As the Chair makes clear, at least for now “Governors will immediately cease consultation with respect to Academy Conversion for Prendergast School” (but apparently WILL continue for the other two schools). 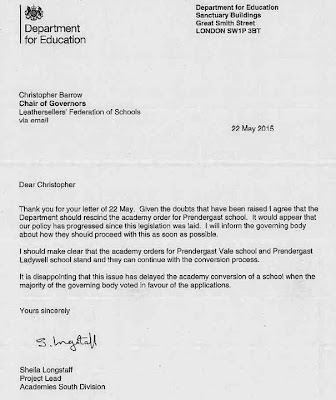 1. Was this ever a genuine consultation?
Governors – and I know some follow this blog – have been at pains to insist that they have been consulting with an open-mind and that there are no fixed plans to vote for a MAT on June 17. I still hope that this is the case and that the strength of opposition and argumentation against the MAT plans might persuade them to think again. However, a letter from Sheila Longstaff, DfE ‘Project Lead, Academies South Division’ commenting on the rescinding states “the academy orders for Prendergast Vale school and Prendergast Ladywell school stand and they can continue with the conversion process ... it is disappointing that this issue has delayed the academy conversion of a school”. (my emphasis in bold).
The DfE clearly seem to have been expecting only one outcome – conversion of the schools into academies. So was this ever a genuine consultation at all?

2. Why has the Academy Order been withdrawn?
The withdrawal has been forced upon the DfE and the Governors by a legal challenge from a Prendergast parent. It appears that the Governors accept that the challenge has a sound basis as the Chair concedes that the “issuing of the order was likely to be found not compliant with the regulations”. The regulations that form the basis of the challenge are named by the Chair of Governors as the School Governance (Federations) (England) Regulations 2012. The legal papers have not been made public but the issue seems to hinge on the wording that “An application for an Academy order in respect of a federated school” must be made by certain prescribed governors including “any staff governor employed by the federated governing body or local authority to work at the federated school”. However, the staff governor did not make, nor support, the application!
How many other federated schools have been converted since 2010 in breach of this legislation?

3. Does this technicality really make any difference to the process?
For now, yes, because, unless or until the legislation is changed, that’s what the Law says! In the public debate, the Executive Headteacher was at pains to point out that Governors have followed the letter of the Law. Arguments for a parental ballot have been rejected – because the Law doesn’t insist on a ballot (although it certainly doesn’t rule it out either!). Arguments that Governors should have consulted before the Academy Orders were issued have been rejected on the grounds that the Academies Act allows consultation to take place either before or after an Academy order has been made.
Governors have at least been consistent, and stepped back in the face of the legal challenge. But wouldn’t it be more consistent to now cease consultation at all three schools?

4. Why has only one Academy Order been withdrawn and where does that leave the other ‘consultations’?
Does the breach of the Governance Regulations also apply to the other two schools? That’s a question for lawyers to look at – and the legal arguments may not yet be over. However, what’s clear is that the existing consultation has been based on the conversion of all three schools into one Multi-Academy Trust. One of the central arguments from Governors has been about the supposed advantages of a MAT compared to a hard federation of maintained schools. But what decision can be made if the consultation continues? To set up a MAT of the other two schools and leave Prendergast as a stand-alone maintained school? What kind of Governance structures will be needed for that?
If the Governors proceeded to vote for conversion of just Vale and Ladywell schools, the whole consultation would be based on a false premise. Surely, the whole consultation process now needs to be stopped?

5. Has the conversion of Prendergast School been permanently stopped?
Unfortunately, it doesn’t seem so. Perhaps the supporters of the MAT still hope to convert the two schools and then add Prendergast later when the legal issues have been resolved, perhaps by the Government changing the Regulations. That’s why it’s vital that this legal challenge is only seen as a temporary success. The campaign has to keep up the pressure until the Governors meet on June 17.
· Keep sending in responses to the consultation objecting to the proposed conversions.
· Support the events planned for June 3rd in particular:
· Rally - from 9.00 am in Cornmill Gardens, opposite Prendergast Vale School, Elmira Street, SE13 7BN (speakers include Kevin Courtney, NUT Deputy General Secretary and Kathy Wallis, Senior Vice President, NASUWT)
· Lobby the Leathersellers' Company - from Midday, 21 Garlick Hill, EC4V 2 AU, to hand in a letter appealing to the Company to urge Governors to reconsider their proposals. Locally, meeting at either Ladywell or Lewisham stations at 11 am to catch the 11.10/11.15 train to Cannon Street
· Lobby Lewisham's Mayor and Cabinet - from 5.15 pm, Civic Suite, Catford, SE6 4RU. The meeting, starting at 6pm, will be considering the Council's response to the consultation (Paperwork for the meeting will be published on the Council website this Thursday, May 28th).

6. Why are teacher unions taking action during the exam period?
An article in Tuesday’s Guardian quotes the executive headteacher as saying that “Governors very much regret that two of the unions have induced their members to take strike action on days when there are important exams”.
It is teachers, above all, who understand the importance of exams to the students they work so hard to support. However, it is the Governors that have chosen to start consultation at a time when students are preparing for exams, rather than delay until after the General Election as they first announced in February.
With Governors still apparently not heeding the strength of opposition to their proposals from across the school community, and the trade dispute left unresolved, unions have had no choice but to maintain their action while making what arrangements we can to protect exam preparation. That’s why unions agreed with the Federation that we would not to take strike action in the key revision period in the first half of the summer term. Now, in the period when exams actually take place, our action should not impact directly as teachers no longer invigilate external examinations. However, the NUT will grant dispensation to members where key GCSE revision arrangements might be affected by strike action and has already informed the Federation that a maths revision day will be able to go ahead at Ladywell School on Wednesday June 3rd.
Finally, I would hope that Governors recognise that, while their teachers always regret having to take strike action, they have consistently done so, not from being ‘induced’ to do so (a legal phrase related to industrial action legislation) but because they feel so strongly about persuading Governors to withdraw their damaging proposals in order to resolve our trade dispute.

7. Does the withdrawal of the Academy Order affect the teachers’ strike on June 3rd and 4th?
Teachers’ action has been based on the trade dispute over the threat to a change of employer because of the threatened academy conversion. If Governors are able to make clear that this threatened change has now been fully withdrawn then our trade dispute will have been resolved and the action can be withdrawn. However, as yet, that’s certainly not the case at Vale and Ladywell schools and, while we are seeking clarification, nor is it yet at Prendergast (Hilly Fields) school either.
There are other steps that Governors could take if they wish unions to withdraw their action. I have made clear to Governors that, if a properly-conducted ballot of parents were to be agreed, then I would be prepared to recommend to NUT members that our action was withdrawn. Clearly, from the position of both Governors and Unions, the subsequent outcome of any such parental ballot in and of itself would not commit either party on how it chose to respond further and, in and of itself, would not resolve our trade dispute. However, it would surely be a significant factor for both parties in judging how to proceed.
The question for Governors remains, if they are sure of the strength of their arguments in favour of academy conversion, why not agree to such a parental ballot?
Posted by Martin at 09:48

This comment about teachers taking action when there are "important exams" I do not understand - and never have when it it is thrown at us. Would the exams still go on if teachers were on strike? Yes - they would. Teachers no longer invigilate exams - specially employed exam invigilators do - in fact, if I try to walk into the Exam hall during an exam, I am asked to leave! Further to that, the NUT is still running scared of calling any action during the exam period exactly because of this same ridiculous and mistaken logic - that we may somehow be portrayed as totally irresponsible for taking action which may 'disrupt' exams when in fact it would do nothing of the sort.

There is no evidence on the The Leathersellers’ Federation of Schools website that the Prendergast Ladywell School application for an Academy Order is valid. The decision to apply for the Order was made at the 15 February Governing Body meeting, but the school's Parent Governor's apologies for absence are recorded in the minutes. The Parent Governor may have supported the application outside the meeting (the support of a majority of governors is not required just six governors which must include the parent governor). The 15 February minutes also record the resignation 10 days before the meeting of the Prendergast Vale School parent governor, so there was not one in place when the application was made so his/her support is not required to make a valid application.